Playing With My Dodgers: Walter Alston

Until Bill Russell took over for Tommy Lasorda as skipper of the Dodgers in the middle of the 1996 season, the franchise had been under the guidance of just two managers since its move west nearly forty years prior. Stability became one of the great strengths of the west coast version of the old Trolley Dodgers.

But I never really knew the man who won the only championship for Brooklyn before leading the team west to even greater success. I feel like I know his teams well: the transitional 1959 team that surprised everyone with a championship season at the cavernous LA Colosseum; the dead-ball Dodgers of the mid-'60s, who won two more championships behind the golden arm of Sandy Koufax; the young upstarts of '74 who couldn't quite derail the Oakland dynasty. But, even though he's a Hall-of-Fame manager, who led clubs in the two biggest media markets in the country, in the uniform of a team I've loved and learned about since I was a kid, I don't know more than a couple of anecdotes about Walter Alston.

Much of this has to do with the fact that he retired when I was six years old, a good four years before I became a baseball fan. But that's not the only explanation. Walter Alston was simply everything that Tommy Lasorda wasn't. Where Lasorda was loud, obnoxious, prone to public temper tantrums, an affectionate and emotional motivator, and a tireless self-promoter, Alston was reserved, dignified, quietly intimidating, unpretentiously cerebral, and did not seek the spotlight. All he did was sign a new one-year contract each year for 23 seasons, and guide his charges to play winning baseball. 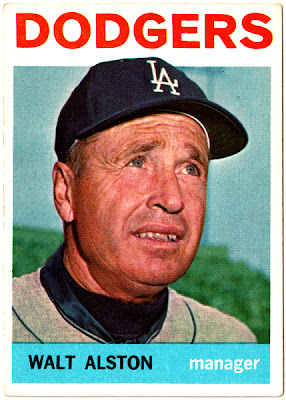 The unassuming Alston had many great-looking baseball cards over the years, but, fittingly, there isn't one of them that seems to stand out among the rest. They all depict the man with the same workman-like dignity that he brought to his job for more than two decades. This unadorned 1964 Topps issue fits the bill to represent the great Dodger skipper in the PWMD Set quite nicely, indeed.
Posted by petethan at 8:55 PM