Sunday night, the last Card Night of the week. As always, we've got some repack goodies. Let's play... 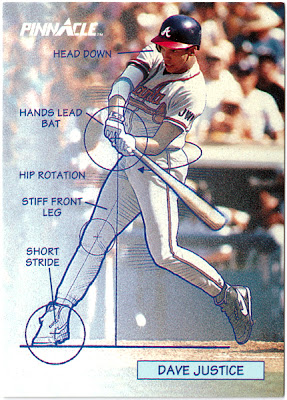 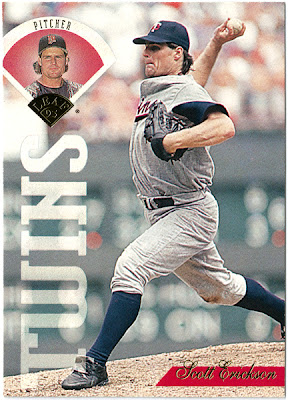 I'm not usually much for the overly gimmicky, but there's something appealing about the look of the Pinnacle Technicians thing. Might be the childhood interest in comic books. And speaking of visual appeal, check out the retro duds on junk wax omnipresence Scott Erickson. I like those unis because they're what the Twins were wearing when they got beat by the Dodgers in the 1965 World Series. 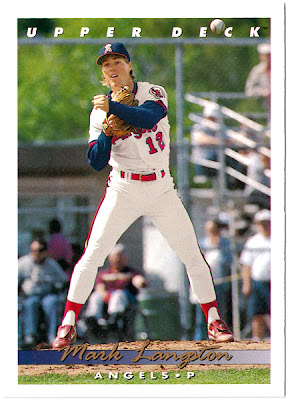 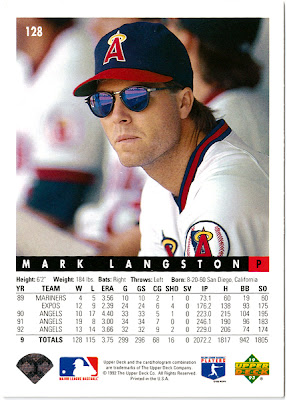 Staying with the theme of visual appeal, here's one from the set from that era that defines the concept. Upper Deck's 1993 offering is certainly nothing that flies under the radar among collectors. But I don't think I'll let that stop me from becoming one of the multitudes building the set. For some reason, it looks like I managed to pick up a box of series two sometime back int he day, but I'm almost entirely lacking in offerings from series one. To that end, I just made a small trade with Joe, at From An Unlikely Source!, who is also building the set. And I was also glad to pull this series one goodie from a repack. Gotta dig the ball coming at you from a quick step-off throw to first, not to mention Langston's cool So. Cal shades. 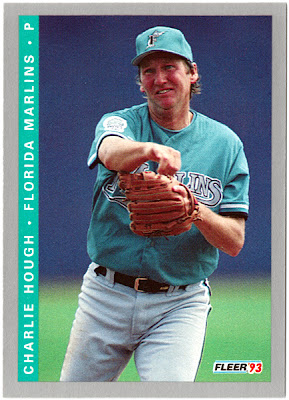 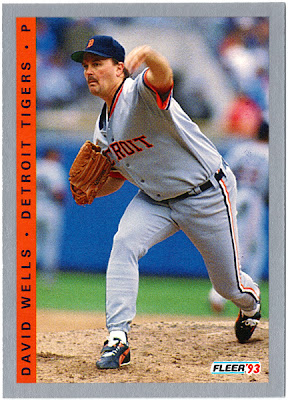 I've started looking through this 300-card set, which I bought at my vacation stop at a card shop for $5. The first ten cards I looked at earlier in the weekend were bland enough to make me wonder if even five bucks was too much to pay. Sunday night's ten didn't start out much better, but things started to turn around when I hit upon Rough Tough Charlie Hough, the ancient ace of the expansion Marlins. He was immediately followed by another guy who pitched forever, and fellow fat dude, Boomer Wells. The front of these cards are little dull visually, which would be okay if the quality of the photography were better. 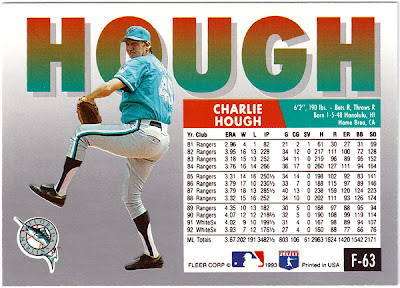 But the backs manage to redeem things a bit with a touch of bold and colorful '90s graphic excitement. 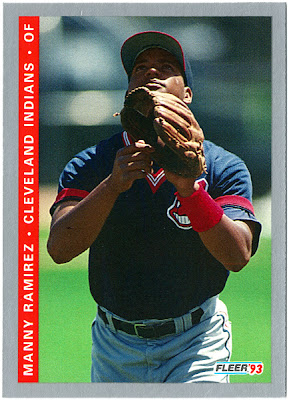 Though it's not a particularly beautiful card, it was still fun to stumble across Manny from before he was being Manny. I haven't been able to feel quite as much contempt for Manny as I have for Bonds, Sosa, A-Rod, McGwire, Palmeiro and others, for some reason. And it's not just because he was briefly a Dodger. Actually, maybe that's not the best way to put it. Because his actions were certainly at least as worthy of scorn. I guess my contempt just isn't quite as visceral when it comes to Manny. Without being too politically incorrect, I think I've always felt that Manny was somehow less in control of his childish whims. With the others, it seemed like the cold calculation of a cheater. With Manny it seemed like something he wasn't really giving much thought, but was instead acting on impulse, without much by way of impulse control. That's Manny being Manny. It seems more sad than whimsical these days.

To wrap things up, I enjoyed a particularly fruitful pack of '12 Pro Debut. 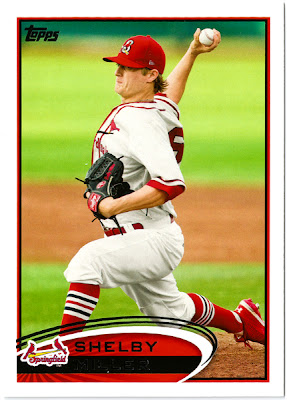 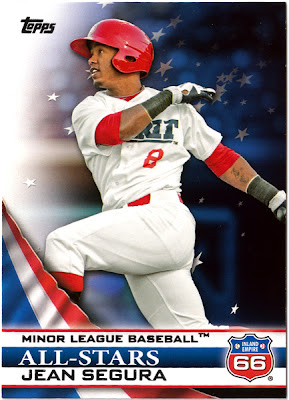 It's probably a little more fun opening these types of cards a year after they come out. Enough time has passed that you know when you've hit upon something interesting. But not enough time has passed to take all of the mystery out of it. I also got a Jedd Gyorko in this pack, which is fun not only because he looks to be a fine player, but because even Vin Scully seems fascinated with the pronunciation of his last name. Vin also loves that Yonder Alonso's parents gave him his first name simply because they liked the sound of the word "yonder." When Vin is amused by something, you can't help but share the feeling.
Posted by petethan at 11:21 AM