I was in for yet another great surprise on Saturday night. As I was preparing to go into lockdown for Card Night, my daughter, Kara, brought me a large bubble mailer that I'd apparently received earlier in the day. I hadn't ordered anything. I didn't think I was expecting a package this big from anyone. Frankly, I was a little dumbfounded as I opened the package and found eleven plastic-wrapped bricks, encircled by blue tape, each containing about 30-50 cards. Had someone I didn't even know just send me the granddaddy of card bombs? I honestly had no idea what I was looking at. Until this fell out of the package... 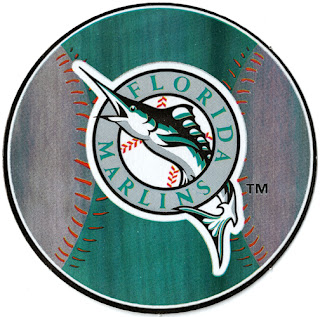 Then the sluggish synapses in my brain began to fire. A few weeks ago, Kerry from Cards on Cards had offered up his surplus of Marlins cards, thinking that nobody would want them. He apparently hadn't figured on someone like me stumbling by! If it's a baseball card, I want it. So, if anyone else out there is looking to simply get rid of anything, by all means, get in touch with me!

You can see Kerry's thinking, of course. I mean, do the Florida... now Miami Marlins actually have any fans? Or do they, like their good players, simply disappear immediately following their sporadic successes? Why would anyone want these cards?

Well, they're baseball cards, and that's good enough for me, being a completist and a pack rat. But when I opened the first package on Saturday, consisting of about 36 cards, I realized that even Marlins cards can be fun, too. Let's play... 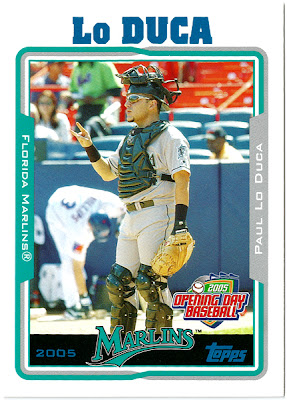 This was the first of a short stack of '05 Opening Day cards, and it took me several seconds to register that it wasn't actually a Dodgers card. These were the first cards I'd ever seen from this set, and the blue foil fooled me. Seeing a Lo Duca card makes me a little sad, though. There have been very few "fallen heroes" for me in the whole steroids fiasco. I never much cared for the big men (literally and figuratively) on the list, such as Bonds, McGwire, A-Rod, Sosa, Clemens, etc. Even Eric Gagne, as exciting as his accomplishments as a Dodger were, never really captured the kind of respect that develops into admiration from me. But Lo Duca did. I liked him from the start because he played hard. And, like Mike Piazza, his career path took him away from my Dodgers, but eventually to New York to play for the Mets while I was living in the Big Apple. I started to get the sense that something was wrong one day when he blew up at an umpire after a play at the plate and really overreacted, veins popping from his neck. Shortly thereafter came the news that his name was in the Mitchell Report. Big-time bummer. 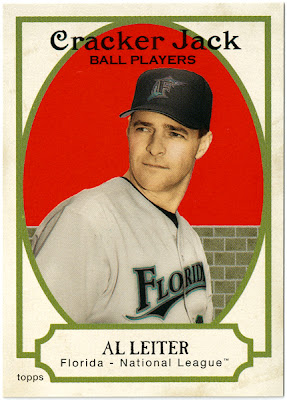 I'm a big Leiter fan from my NY days. Enjoy him on MLB Network, too, even though he can get his motormouth running a bit too fast sometimes. This is a nice-looking card. I really appreciate getting just about anything from around 1997-2007 because I have very little other than the Topps base sets from that era. 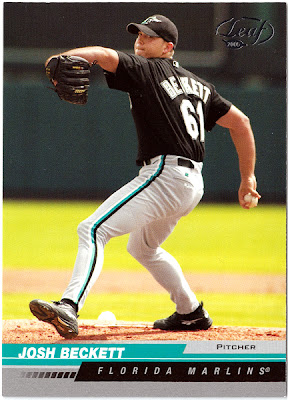 Speaking of which, here's a really great looking card from what looks to be a nice year for Leaf. Even though Beckett has joined the Dodgers family, I still can't make myself like the guy, though I certainly respect his accomplishments. He broke my wife's heart, beating her Yankees in 2003, her first year as a baseball fan. Plus he seems like a real prima donna. 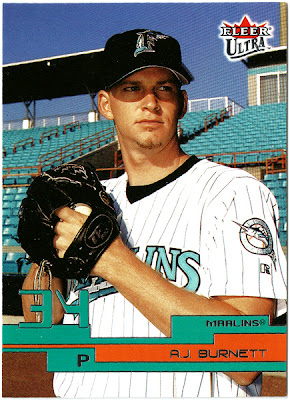 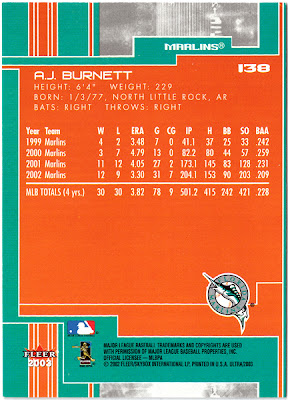 My respect for Burnett has grown since he left New York for Pittsburgh. By all accounts, he's been a really positive veteran presence on the Pirates roster. I'm really hoping that team holds on this year, with not just a winning record (finally) but a playoff berth. By the way, if (when) I do a post about card designs that I should probably hate, but can't help but love, it looks like '03 Fleer Ultra has a real shot at making the list. Having lived through the Y2K, cyber matrix era, I can tell you that these cards do a heck of a job of capturing the moment. 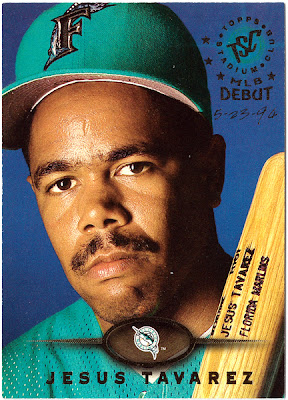 AHHHHHH! Sorry, but Jesus Tavarez just scared the crap out of me! It's not his fault. Closeups are nice, but Topps went a bit too far with this one. Back off, man! I feel like he's peeking through my bathroom window or something. And what's he planning to do with that bat!? I'm calling 911... 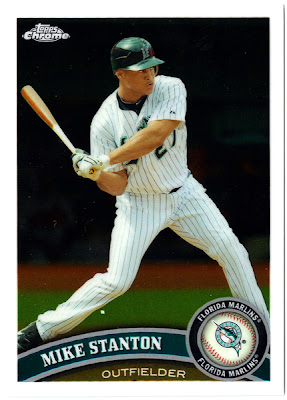 Kerry didn't weed out the big fish, as evidenced by this shiny pre-Giancarlo Stanton. 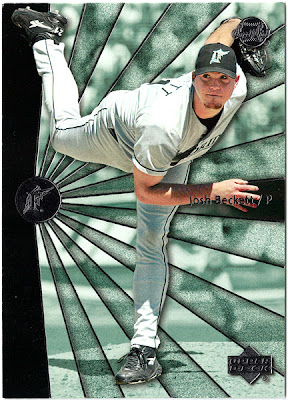 Here's another example of something I would probably hate if you just described it to me. But, actually looking at it, I can't help but love the thing. 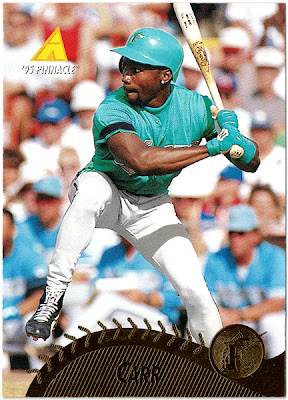 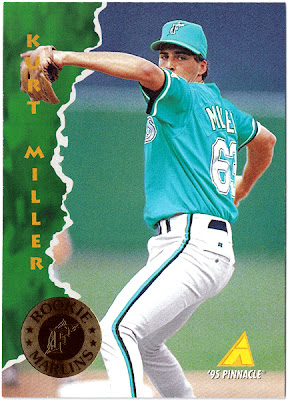 There were no cards that I spent more time staring at, though, than this pair of '95 Pinnacles. Man, those uniforms are awesome, in that so crazy-bad they're cool kinda way, originally perfected at the MLB level in the late '70s/early '80s. And check out the leg kick on little Chucky Carr. Might be a clue why the dude didn't get on base enough to make his speed work to full advantage, eh?

This was just some of the fun I had opening up only one of eleven little packages of Marlins cards. Who knew? I'll make it a Saturday night tradition until I've gone through them all. I'm also using the spiffy blue tape Kerry wrapped things in to add additional racing stripes to one of the shoe boxes I keep unopened cards in. Dorky, I know. But I'm a card nerd like that. It will help me remember the time I caught a big Marlin (card haul). And I really appreciate Kerry's generosity in feeding the habit by bringin' on the random fun. Thanks, man!
Posted by petethan at 8:45 PM