Here's last Friday night's "pack." (Anyone else getting annoyed by the way I'm putting "pack" in quotes each time? It's bugging me, and I'm the one doing it!) 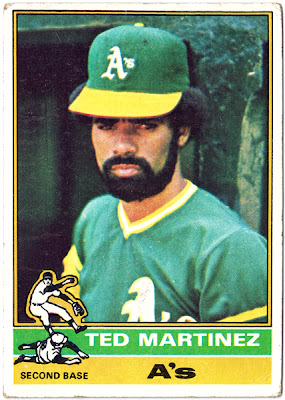 One-time Dodger in Technicolor green and gold, with bad-ass facial hair and the cool '76 Topps second base icon. 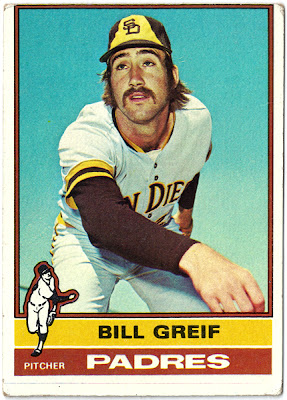 Scrunched brows, sad eyes, droopy mustache. Gotta love that the facial expression on Bill Greif makes it seem like he's suffering from grief. Either that, or he's stoned. 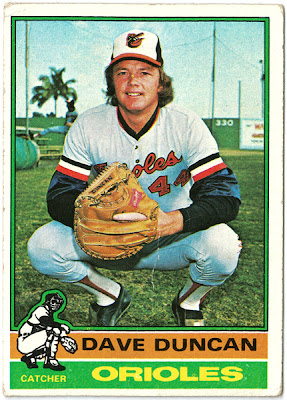 There aren't that many coaches, as opposed to managers, who attain legendary status. But this man was to become a kind of miracle worker when it came to turning pitchers' careers around as Tony LaRussa's longtime pitching coach. Pretty sweet lookin' card, to boot. 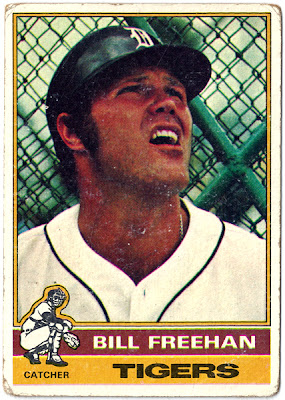 Freehan is one of those guys I wish I'd seen play. From a statistical standpoint, he's vastly underrated. Probably the best the AL had to offer behind the plate for a good chunk of his career. Looks like he was someone you didn't want to run into at home plate, either. 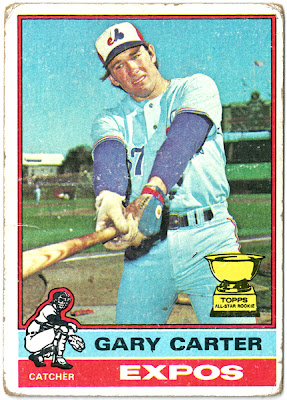 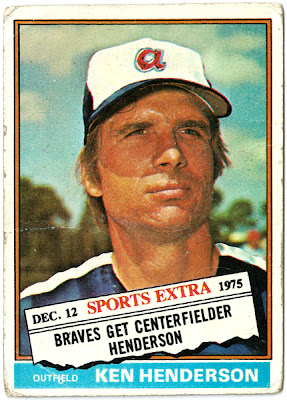 These Traded cards from '76, with their horrendous airbrush jobs and the cool newspaper headline design, are awesome. But the thing that struck me about this Henderson card is that it refers to him as a center fielder. One of the few beefs I have with Topps is its continued refusal to differentiate between the three outfield positions on its cards. I've never understood that. This isn't little league. Those guys out there aren't just leftovers. Willie Mays wasn't just an outfielder, he was a center fielder. Why can't Topps acknowledge this simple fact? 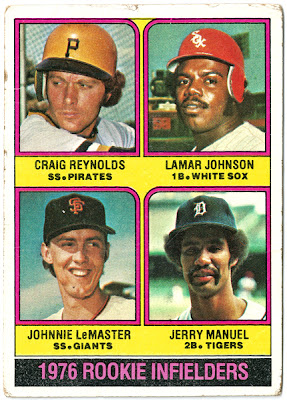 No stars, but four guys who all had sizable big-league careers. And I like Jerry Manuel from his run as the Mets manager. He was a bit kooky, but I'll take him over the tightly-wound Terry Collins. 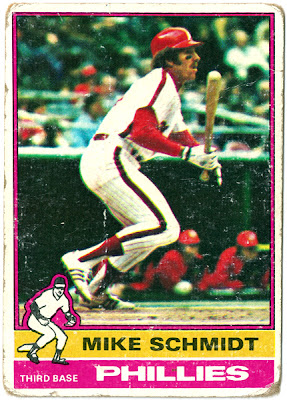 Michael Jack Schmidt brings the Cooperstown count from Night Owl's stash up to two (three if you count McCarver in the broadcaster's wing, which you shouldn't), plus two guys who have an argument for inclusion (Dick Allen and Keith Hernandez).

In honor of the generous Night Owl, from this point forth I will end each of these posts by featuring what I think is the coolest cartoon from the back of the cards in each "pack." Greg has often professed his love for these virtually extinct fun information delivery systems. This one comes courtesy of the aggrieved Bill Greif:

I said you shouldn't count McCarver as a Hall of Famer because of his recognition with the Ford C. Frick Award. That's Cooperstown recognition, not induction. Which brings up the point that Vin Scully needs to actually be inducted, sooner rather than later. Which brings up the reason I like this cartoon. Growing up listening to Vin made me appreciate the importance of broadcasters to their teams' identity. So I like it when they are recognized, in any way, on baseball cards.
Posted by petethan at 6:05 PM