Playing With My Dodgers: Don Aase

Anyone who read my (even-more-rambling-than-usual) post about my collecting habits knows that one of my goals is to have a card representing every player, coach and manager in Los Angeles Dodgers history. Well, as my endless sorting process unfolds, I will be "inducting" cards into this collection.

Just a quick note about this project... My goal is to aim first and foremost for cards featuring the person in question as a Dodger. That won't always be possible, though. I will be picking a card that I think looks great, and best represents that player. That means that, although I dig good action shots, I will be making it a priority to chose cards where you can see the player's face, and perhaps get a glimpse of his personality. This is all about the front of the card, as the backs won't factor into things. Think of these as museum pieces, or as something similar to Cooperstown plaques. My selections will also, no doubt, show my strong bias toward Topps cards. I won't necessarily be going by strict alphabetical order, but the project will lean in that direction as it unfolds in conjunction with my sorting project. I reserve the right to "upgrade" an induction if I acquire a better card, but I'll try to hold off in cases where I think that's likely. Enough ado. Let's get started...

By virtue of his Aawesome name, veteran reliever Don Aase gets the nod as the first card inducted into the Playing With My Dodgers set. Chavez Ravine was the final big-league stop for the mustachioed moundsman, a free agent who was less than stellar in his only season in Dodger Blue (1990, age 35, 4.97 ERA in 38 innings). 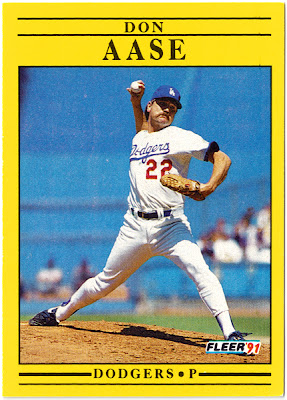 Full-body action shots, particularly of pitchers, rule. And that's what we've got here ("FLEER '91" notwithstanding). There's the added bonus that the action is taking place at Dodger Stadium. There is no Topps card of Aase as a Dodger to consider, but 1991 Fleer makes for a fine alternative. I used to hate these. Now I love 'em. Go figure the fickle fancies of a card connoisseur.

The choice also presents a perfect opportunity to direct you to Yellow Cardboard, the excellent new set blog from the author of All the Way to the Backstop. Go check it out.
Posted by petethan at 6:33 PM