Last Saturday's Card Night was a long affair, in tandem with the Dodgers four-hour, ten-inning win in D.C. So, grab a cold beverage and pull up a chair. Let's play...

My wife, Cathy, reads this blog sporadically (mainly when I remind her that it's a contractual obligation to humor me). I don't plan to remind her to read every post, though. Case in point, this post, in which I reveal that I recently bought a couple of 5000-card boxes full of junk wax treasure from a dude I found on Craigslist. It was a good deal. I mean, I've seen those green, paper thin things with pictures of presidents on them tons of times. They don't compare to baseball cards. For example... 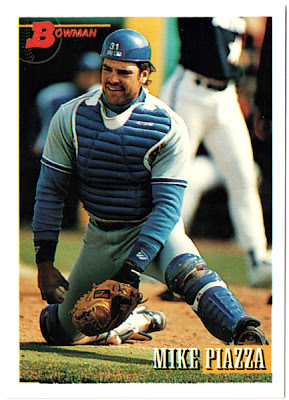 There was a small stack (maybe about 50-60 cards) of '93 Bowman in there. I had very few of these cards already, so gems like the Moose and Mike above are exactly what the Card Night doctor ordered. (He also ordered some other stuff from eBay, but that's for a later post. Don't tell my wife!) By the way, isn't Moose & Mike the name of some sports talk show? It's gotta be, somewhere, right? 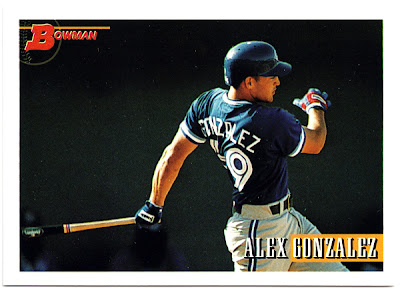 I'm not usually a fan of this specific photo cropping choice, but in the context of this card design, I give Alex Gonzalez the MAP Award (most aesthetically pleasing) from this bunch o' Bowmans.

Next up I continued to dig through the '93 Fleer Final Edition set. Bottom line, you usually get a pretty boring photo on the front, and then flip over to the back to enjoy the candy-colored treat. There are a few sets where the backs are better than the fronts, and they're mostly sets that I ignored back in the day for that reason. But, just because the back is better, don't mean it ain't a good thing. Enough words. Lots of pictures. See you in a bit... 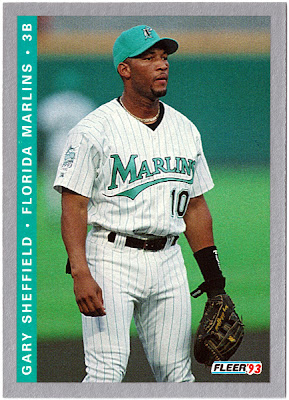 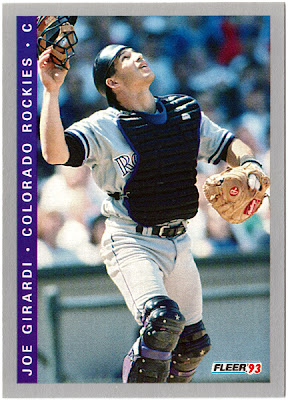 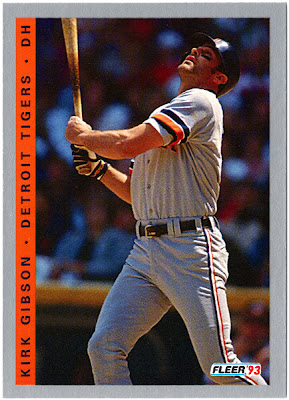 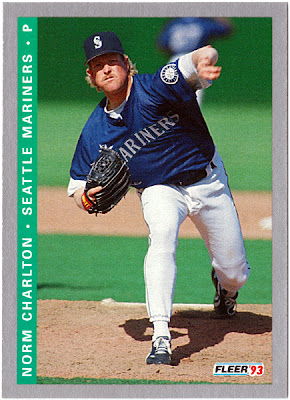 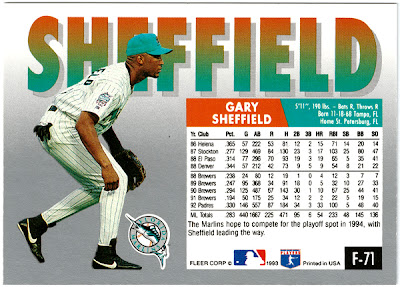 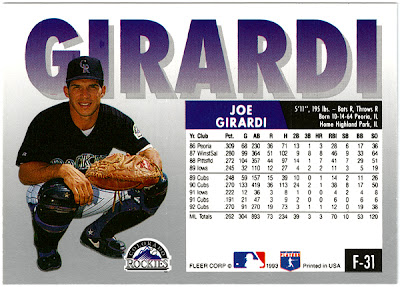 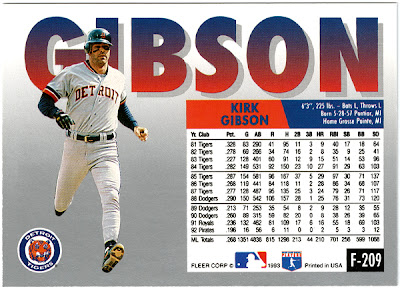 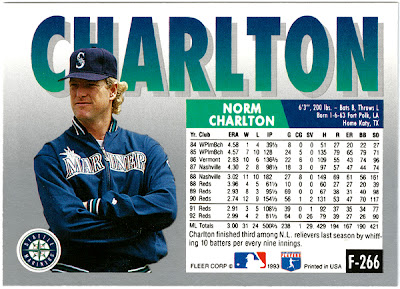 See what I mean? Or is it just me.

I found two packs of '12 Bowman Platinum on the clearance shelf at Rite-Aid, I I figured it was okay to spend three bucks for eight shiny cards. But, as usual, they left me confused. 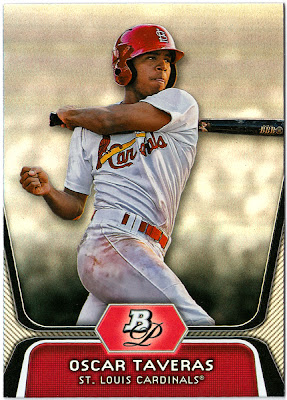 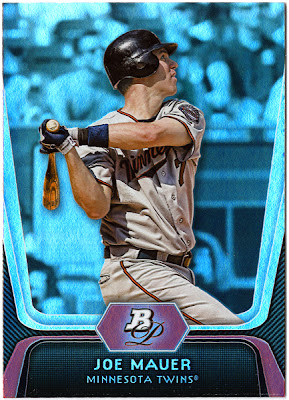 These two cards looked exactly the same to me when I was holding them in my hand. I still don't know if they're actually different types of cards, or if the light from the scanner was just hitting them at different angles. Is one a refractor, or something? Those things have been around for, what, about twenty years? And I still have no idea what a refractor is or how to identify one. I was heartened to read recently that Greg, the Night Owl, had initially misdiagnosed the shiny malady afflicting some of his Dodgers cards. So I don't feel so bad. Can anyone help me identify what I'm looking at here? 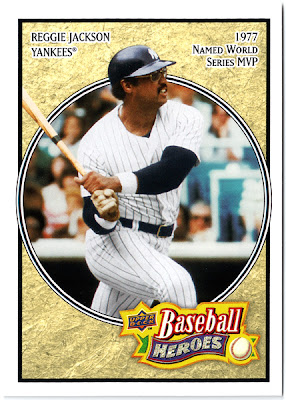 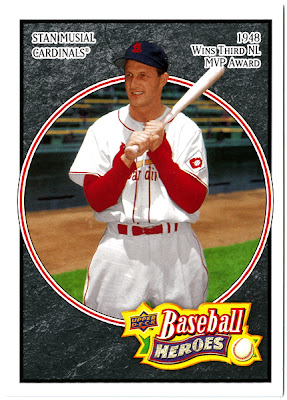 Per usual, it was the retired players who highlighted the experience of opening a pack of '08 UD Heroes. And another Cardinal great graced the repack portion of this night's habit food. 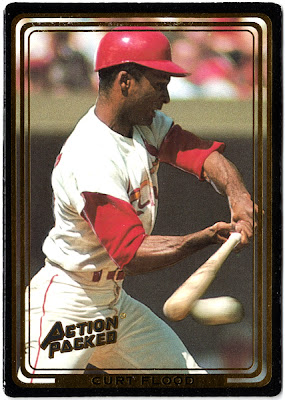 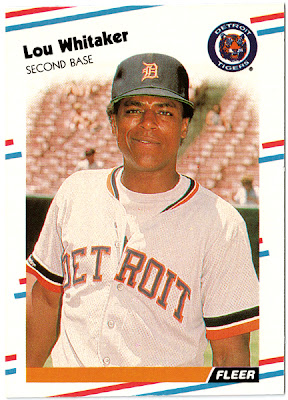 What is that look on Sweet Lou Whitaker's face? Is he thinking, "I'll bet you're gonna put this picture on a really crappy looking card, aren't you, Fleer?" Yes, Lou. They did.

And now, a Playing With My Cards dilemma... 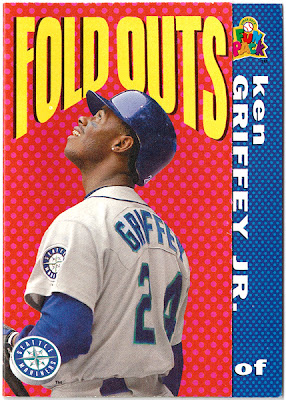 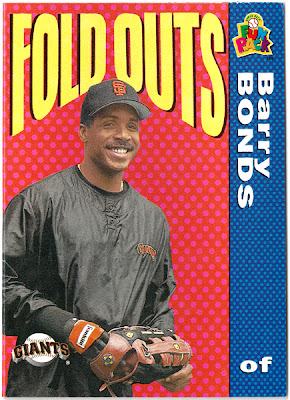 Now, if I were gonna be true to my name, I'd bust these things open and play with 'em. But I'm a wuss. It's not an investment thing (obviously, since they aren't worth anything). It's an aesthetics thing. I just want them to be able to stay flat. It's a real conundrum. Anybody think I should open 'em up?

Let's wrap this up with some minor league fun, starting with a repack find. 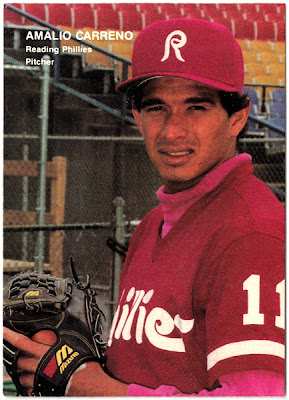 A couple of weeks ago we had a chance to enjoy Joe Carter's sweet blue and white striped tutleneck, which coordinated nicely with his Blue Jays uniform. What do we think of Amalio Carreno's choice of a pink turtleneck under his maroon uniform? It works in this context. It's bush league.

I got a taste of minor league goofiness, so I wanted more. I opened a pack of '92 UD Minors and I got a couple of nice-looking cards of pitchers. 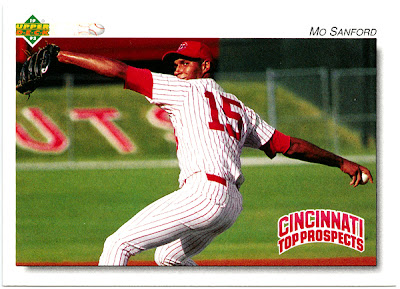 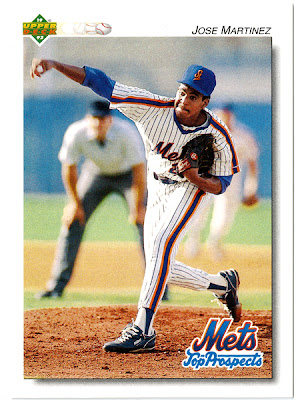 I usually don't like backgrounds that are busy with other people. But I really like the way the umpire is framed by Martinez's pitching arm, while the shortstop stands comfortably in the angle formed by his push-off leg. I have no idea who Jose Martinez is. Digging into photo composition my way of appreciating this card.

But it's goofiness we're really looking for in minor league cards. Let's see what we've got... 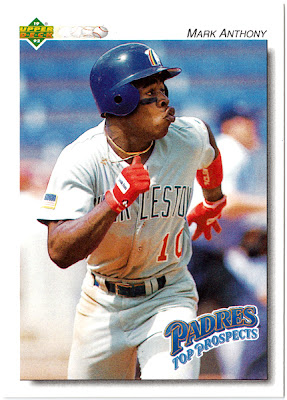 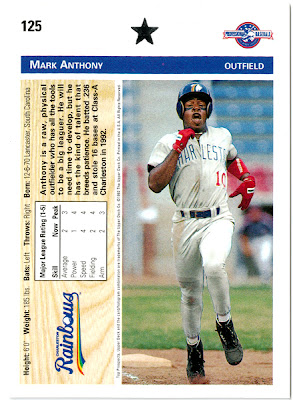 He's playing for the Rainbows, so that's always a good start. We see Anthony busting out of the box and sucking in air on the front. Then we get to see the results of his sprint to first on the back. Probably more cool than goofy. Let's try again. 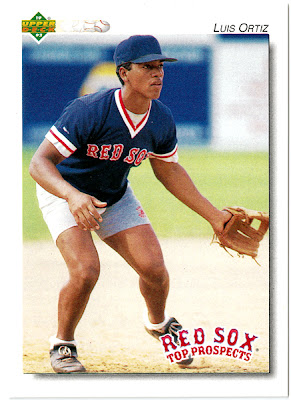 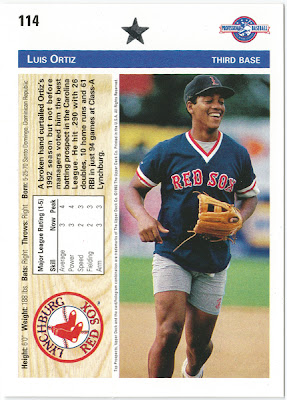 Ah, that's better. Outside of the 1976 White Sox, you don't see a lot of baseball players in shorts. This qualifies as goofy. A grown man in shorts... Wait a minute, I wear shorts to work every day. Might have to rethink that.

Thanks for playing.
Posted by petethan at 11:50 AM