Friday night was my first Card Night since returning from vacation with some serious booty (and I don't mean mine from vacation overeating, though there's that, too). Friday, Saturday and Sunday nights are my Card Nights, when I welcome new cards into my collection. I'm a pack-busting kinda guy. Sure, I like getting cards that I know about and want. But I really enjoy getting cards that I didn't even know I wanted (which amounts to anything that I don't already have). So Card Nights are all about discovery.

On Friday, I opened a couple of packs of 2013 Topps, Series 2. With a few exceptions, I generally won't be showing the current year's cards here. One of the few things I don't like about card blogs is that I prefer to see a new card for the first time when I bust one of my own out of a pack, rather than see a picture of someone else's card on a computer screen, and sometimes the blog experience can ruin that bit of fun. The only card I can remember being happy about from these packs two days later is a Pablo Sandoval WBC insert, certainly not because he's a Giant, nor because he's a fellow fat guy (which this card does nothing to hide), but because I'm chasing this subset. So far, I only have Kung Fu Panda and "Captain America," David Wright. (There's a little pre-want list hint for you all.)

From my vacation haul I also opened a pack of 2005 Topps Total, which, except for a rather bland Derek Jeter, was altogether unexceptional. Still love having me some Total, though. Any time you can get baseball cards that are printed on actual baseball card stock, it's a worthwhile endeavor. Plus you're gonna get some guys who didn't have many cards. There was a nice one of Orioles pitcher Eric DuBose levitating the rosin bag. Don't really remember the guy, but I'm glad to have his card. That's the kind of collector I am.

Which I why I love repacks, which make up the majority of my Card Night discoveries. Sure, they mostly consist of junk wax era stuff that the average collector already has in quintuplicate, but they're also where you can find the most fun. And, like Grandma says, it's all about Playing With My Cards. So let's play... 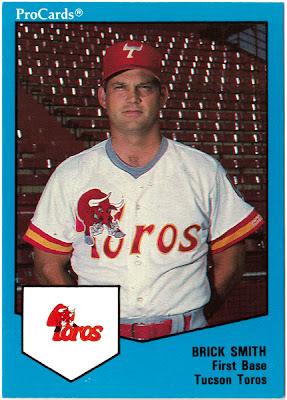 I love minor league cards. I mean, look at this thing. Where else are you gonna find a card of a guy with a name like Brick Smith wearing a giant snorting bull on his uniform? The dude played in nine major league games with the Mariners in the '80s, but as far as I'm concerned this card is his career highlight. 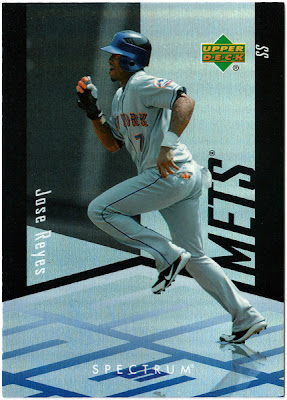 I'm a Jose Reyes fan, but it's cards like this that made me feel indifferent toward baseball cards for far too long. At least the scan dulls things down so you can actually see what's going on. Problem is, what's going on has nothing to do with baseball. It looks like something a malevolent alien race might do to preserve a ballplayer that it captured and killed for sport on that quirky little planet Earth. 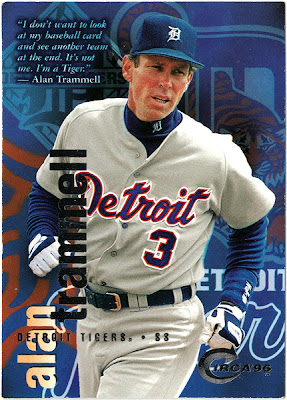 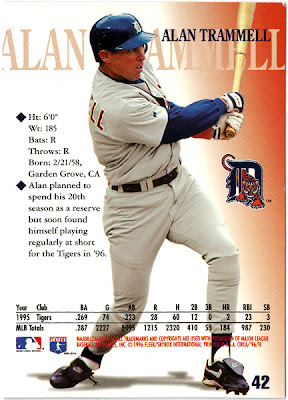 I'm a decidedly old-school kinda guy. But I'm not entirely averse to shiny and flashy, if it's done right. '96 Circa is not something that I had in my collection until I started pulling them with some regularity out of Ultimate Jumbo Packs from the dollar store. When I first saw these my brain lumped them in with '95 Fleer (worst. set. ever. period.) and those weird cards from around the turn of the century that attempted hip-hop lyrics for each player. But as I've continued to pull these and look at them more closely, I've come to realize that it's actually a really well-executed set. It's loud, but the elements are balanced in such a way as to make really satisfying cards. The quotes on the front are unique, and usually fairly insightful. Nice. 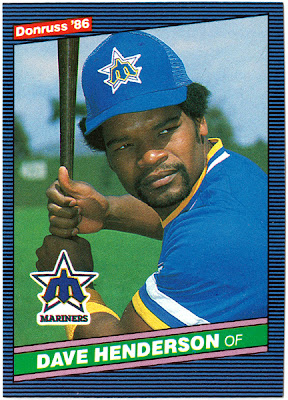 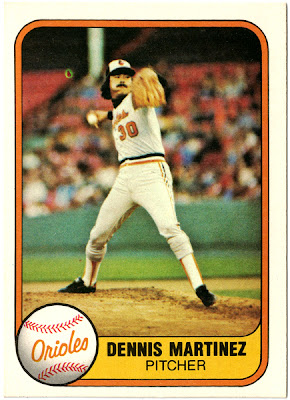 For Fleer, that's a pretty nice action shot of "El Presidente," a favorite of mine (despite his no-hitter against my Dodgers) for his late-career veteran pitcher craftiness and success. I've always wondered what causes those little pucker marks like the one in the stands behind his head. Maybe something's sticking to the card when the glossy coating is applied? Dunno. I had to show this 1986 Donruss Dave Henderson because it's very rare that I look at any Donruss card from the '80s and think, "that's a sweet looking card." This one's a keeper. (Who am I kidding? They're all keepers to me.) 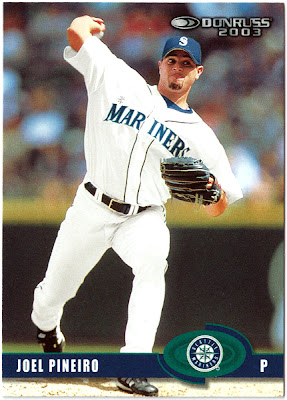 Like many collectors, the late '90s and early 21st Century represent leans years for my collection, so I'm always happy to pull just about anything from that era. Joel Pineiro made a late-season splash as a rookie, going 6-2 with a 2.03 ERA down the stretch for the 116-win Seattle Mariners in 2001. However, the majority of his career was spent as a middle-of-the-rotation innings eater. The reason I enjoy seeing his card pop out of a pack, though, is that he makes me laugh. My good friend Warren is a die-hard fan of the Los Angeles Angels of Anaheim, California, USA, Earth. Pineiro was not particularly effective for Warren's team in what appears to have been his final big-league season in 2011. Every time Pineiro took the mound, Warren would refer to him as "Piñata," because of how the opposition would batter him around. So he'll always be Joel Piñata to me. 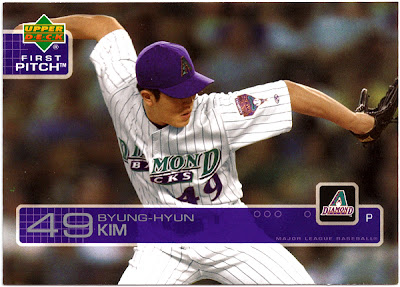 I was not at Yankee Stadium for the famous "Mr. November" game, when the Yankees tied it with a two-out ninth-inning homer, and later won game four of the 2001 World Series with a Derek Jeter walkoff homer against Hyung-Hyun Kim. I was there the next night, when it was déjà vu all over again. I watched from the center field bleachers with two outs in the ninth as the ball sailed toward me to my right, Scott Brosius pumped his fist into the air, and Hyung-Hyun Kim collapsed into a crouch in disbelief on the mound. It was hard not to feel a little sorry for the guy. But, like it says on the back of this particularly pretty purple card, the kid from Korea showed some gumption, bouncing back with an all-star season in 2002.

There was one more thing that I opened on Friday night, but that's a story for another post...
Posted by petethan at 1:19 PM