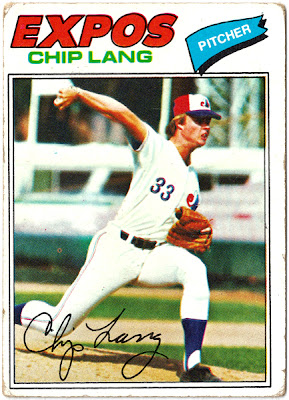 After three more '76ers, Chip Lang heralds the coming of the '77s, in all of his red, white and blue Canadian glory. I've mentioned elsewhere that I've developed a little crush on the north-of-the-border version of the Nats franchise. After all, Montreal was the site of Blue Monday. And the Expos had a pretty great team (if most definitely not a great stadium) from the beginning of the '80s through the strike year of 1994. They've been gone for almost a decade now, and these uniforms are starting to look super retro cool. But the thing I love about this card, with a picture taken at Parc Jarry before the 'Spos moved into that monstrosity with the malfunctioning lid, is the... cruise ship?... in the background. I mean, what is that thing? Maybe I'm wrong. Maybe it's a spring training shot and that's just someone's yacht parked in the background. Whatever it is, I like it. Plus, dude's name is Chip. This card has a lot going for it. 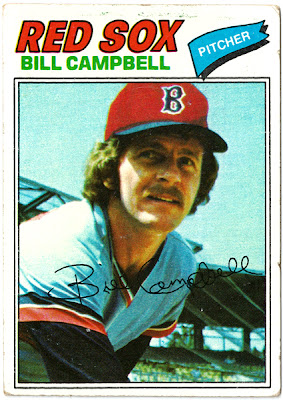 Talk about you're lazy airbrush jobs. First of all, not buying the Boston B facing front and center on a cap pointed east. Worse than that, though, Topps made no attempt to obscure the obvious fact that Mr. Campbell (with his 70s 'stache and 'do) is wearing a Twins Jersey. Unless this was the year the Red Sox wore powder blue uniforms with orange accents. Definitely an exercise in cognitive dissonance. 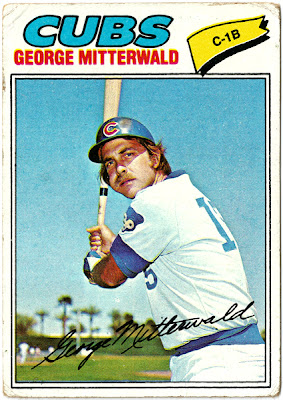 I want to be where the wind sweeps through your hair under a cloudless sky, and grown men are free to frolic in the grass amongst the palm trees with cute little teddy bears on their clothes. And get paid to do it! How come George Mitterwald doesn't look like he's enjoying himself? Oh, I guess it's because we're supposed to believe he's in the batter's box bracing himself for a J.R. Richard fastball. This is why I love these vintage posed shots.

And now it's 'toon time. This one comes from the flip side of Friggin' Giants catcher Mike Sadek's card, and features the Bambino. Babe Ruth was one of the very few players who didn't receive generic-looking drawings in their cartoon features. And it's not just because of his importance, I don't think, or even primarily for that reason. It's because there's never been a ballplayer who was as much of a living, breathing cartoon hero as the Sultan of Swat. And of the seemingly endless string of impressive numbers and feats piled up by the Babe in his career, this is one of the most defining of his transcendent abilities and his redefinition of how the game was played. 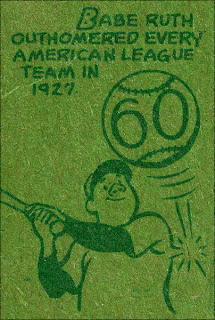 Happy Birthday to Greg, The Night Owl!
Posted by petethan at 11:40 AM