Playing With My Dodgers: Bobby Abreu

I was happy when the Dodgers picked up Bobby Abreu last year after he was released by the Angels. He was never going to be anything like a long-term solution, obviously. But with the injuries of Matt Kemp, and the ineffectiveness of Tony Gwynn and James Loney (prompting the barely-more-productive Juan Rivera to see more time at first base), Abreu proved useful. He got on base at a solid .361 clip, always his forte. He was a good option to come off the bench when he wasn't in the lineup. And he wasn't too proud to spend a little time at Albuquerque to remain available to the organization come September. Plus it's always cool when an accomplished veteran joins the all-time Dodger ranks. 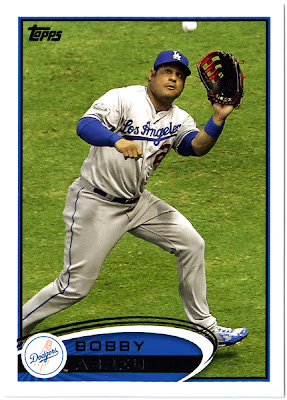 There wasn't a lot of mystery about which card would be inducted into the PWMD Set considering that this was his only card (that I'm aware of) in Dodger Blue. It's nothing spectacular, but it's not bad, either. The all-grass background is nice...
Posted by petethan at 9:57 PM