Playing With My Dodgers: Hank Aguirre

Hank Aguirre was a screwballing lefty who had some excellent seasons in the starting rotation and in the bullpen, but not in the batter's box. Despite what I thought as a kid, his name is not pronounced like McGwire, without the M. It's actually uh-GEAR-ee. I proofread audiobooks for a living, so I find this kind of thing interesting. The native Californian from Azusa spent the bulk of his big-league career (ten seasons) with the Detroit Tigers, with whom he won an ERA title in 1962 (2.21). In his lone season in Los Angeles, at the age of 37, Aguirre was brilliant, posting an absurd 0.69 ERA working strictly out of the bullpen. Astonishingly, he was released by the Dodgers in the off season (1968 was "The Year of the Pitcher"). He would latch on with the Cubs to close out his career with two seasons on the North Side of Chicago. He might be best known for his uselessness with a bat, striking out in well over half of his major league plate appearances and finishing with an .085 career batting average. 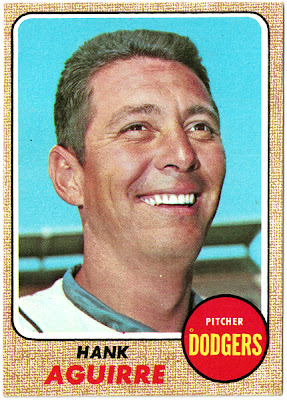 Even though he's actually still pictured with the Tigers in his lone regular-issue card as a Dodger, I really dig this card. Somehow, the clear blue sky, the crew cut, and the casual smile seem to work well with the odd burlap border of the '68 Topps set. It's a scrapbook kind of card, and that fits in nicely with the concept of the PWMD Set.
Posted by petethan at 6:09 PM