Playing With My Dodgers: Luke Allen

Luke Allen's major league hit total is one: a double against Kent Mercker in a Dodger win over the Rockies on September 14, 2002, as he was playing caddie for Shawn Green in a 16-3 Coors Field special. The Rockies must have been impressed by that double, because they traded catcher Jason Romano to the Dodgers for Allen in the off-season. He would bounce around in the minor leagues with Pittsburgh, Anaheim, Boston and San Diego, before returning to the Dodger organization 2007. Everything else I know about him comes from the back of this card. He was signed as an undrafted free agent by the Dodgers out of American Legion ball. He was known for having a big arm, and other MLB clubs had interest in him as a pitcher. And, apparently, he had "exemplary work ethic, dedication and desire." 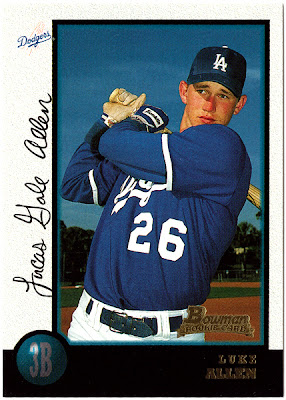 Allen wasn't long out of legion ball when this shot was snapped. We get a nice classic spring training pose of the fresh-faced kid here, along with an sample of how he probably signs his checks. I'm guessing he developed something a little less unwieldy for honoring the autograph requests of the kids along the railing in the hundreds of minor league parks he found himself playing in over the years.

The PWMD Set has begun with four straight people who spent a single season or less in Los Angeles. That streak ends in a big way with the next induction.
Posted by petethan at 7:20 PM