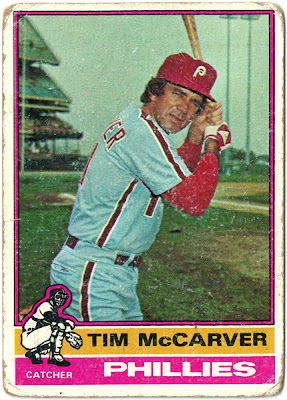 I'm a Tim McCarver fan. He was, to say the least, polarizing as a color man. He could be annoying at times, but I kinda liked him for the most part. But it's his playing career that I'm a fan of. I'm all about pitching. Good field generals behind the plate are a corollary interest of mine, and by all accounts McCarver was excellent in that respect. Unfortunately, he was done by the time I got started watching. But you can see what Gibson and Carlton saw in him if you catch the oft repeated 1968 World Series, Game 1, on ESPN Classic. Plus he's a catcher who once led the league in triples, and that's pretty cool, too. 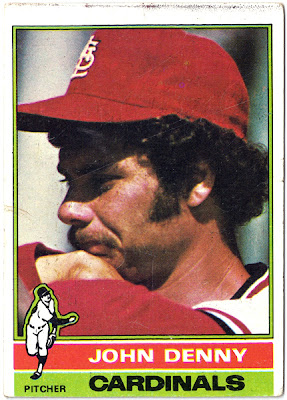 I find a card as old as 1976 of John Denny interesting because he didn't really exist for me until he won the '83 Cy Young Award. I was surprised at the time to find that he'd been around awhile, and had even won an ERA title the year this card came out. Plus it's a really unusual picture. You don't see many introspective super-closeups on baseball cards. 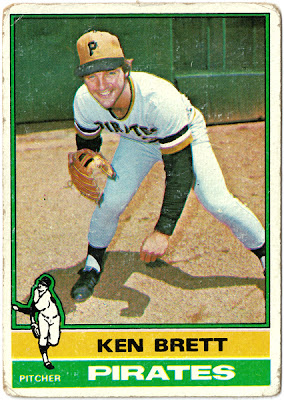 I like the Brett for a few reasons other than Ken's sibling ties to a Hall of Famer. One, he's a member of the all-time Dodgers roster. Two, both Ken and George played against my cousin Craig in high school. Finally, I love the color scheme on '76 Pirates cards, with the uniform-matching yellow and the universal baseball (grass) color, green.