Playing With My Dodgers: Marlon Anderson

I've mentioned before that I'm the it-ain't-over-'til-it's-over type. That means I've sat through many, many innings of what most people would call meaningless baseball. Whether I'm there in person, watching on television, or listening to a broadcast, it doesn't matter what the score is or which side of things my team finds itself on, I tend to stick things out to the bitter end. It's not so much that I'm an optimist (though I usually am), as much as I have a fear that I'm going to miss something interesting. Occasionally, I get rewarded for harboring this fear.

On September 18, 2006, my Dodgers sat a half game behind the San Diego Padres in the National League West with about two weeks of baseball left in the season. The Padres had taken two of the first three games of the series at Dodger Stadium over the weekend coming into this Monday night series finale. Brad Penny was matched up against Jake Peavy. The Padres put up a four-spot in the top of the first. The Dodgers battled back to tie the game after three innings. Things remained quiet until the eighth, but by the time the game had reached the bottom of the ninth inning the Dodgers trailed by four runs.

I was in bed with the lights off, listening quietly on Gameday Audio while my wife slept next to me. By this point in the game I was tired, too, and it was a battle to remain conscious. But, well, it ain't over, right...?

I'm sure you all know what happens next. Jeff Kent homers to lead off the ninth against San Diego reliever Jon Adkins. Okay. Still struggling to stay awake for the final out. J.D. Drew makes it back-to-back jacks. Still down by two, though, and the Padres are bringing in the seemingly-invincible Trevor Hoffman to close it out. Now I have to stay awake through a pitching change. Not easy. Russell Martin greets Hoffman by taking his first pitch deep for the Dodgers' third straight homer. What a disappointing loss this will most likely turn out to be, to get so close but fall short. At least I'm really awake now. Marlon Anderson is stepping into the batter's box. He homered in the second inning of this game. He's got a little pop in his bat, but the veteran utility man has only reached double digits in the home run column once in his career.

But this is his Dodger moment. He smacks the first pitch he sees into the right field pavilion, the Dodger Stadium crowd becomes delirious, Charlie Steiner seems about ready to have a heart attack on the air, and my wife is no longer given the option of sleeping soundly.

There's more to the story, including more drama in this game, and a happy ending. But it was a winning battle in a war lost on a technicality. The Dodgers and Padres would end the season with identical records, but the Dodgers stayed home while the Padres went to the playoffs by virtue of their winning record head-to-head against the Dodgers. But none of that can take away Marlon Anderson's place in Dodgers history. 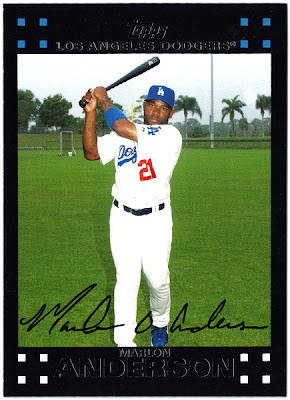 I really dislike 2007 Topps cards. But I also don't much care for '07 Upper Deck, and Anderson's 2006 Topps card is seriously uninspired. So this thing gets the call, somewhat by default. At least it's "interesting," in that it's a card that was only distrubuted with Dodgers-themed factory sets of the '07 Topps flagship product. For whatever that's worth. It's also interesting that you can see Anderson's shawdow... on the wall behind him. Yup, that spring training background appears to have been green-screened behind Marlon's image. That's gotta be what's going on, right? It's a pleasant enough background, but if you pretty much could choose anything, is this the background you would choose? A strange little card, but it will work for the PWMD Set. It, too, can do nothing to diminish Marlon Anderson's place in Dodgers history.
Posted by petethan at 10:32 AM