Playing With My Dodgers: Andy Ashby

The first thing I learned about Andy Ashby when he reached the majors in the early '90s was that he wasn't the veteran Astros catcher. That was Alan Ashby.

Andy Ashby's finest season came in 1998, his first of two all-star campaigns, when he and Kevin Brown would lead the pitching staff for a San Diego Padres team that reached the World Series. The duo would not repeat that performance in Dodger Blue.

"Andy Ashby is a quality pitcher and a quality person. He's a hard worker and a winner, and you can't ask for any more than that." -Dodgers General Manager Kevin Malone, upon signing the 33-year-old free agent pitcher to a three-year, $22.5 million contract, December 2000

Ashby won his first two starts as a Dodger in 2001, but a torn flexor muscle in his pitching elbow ended his season in April. Ashby battled back to start 2002 with a 7-6 record, while posting 3.36 ERA in the first half of the season. Going into his first start after the all-star break, July 13, at Dodger Stadium against the Diamondbacks, his career record stood at 91-91. He would lose that night, and proceed drop six of his final eight decisions of the season. A 3-10 record the following year, capped by Tommy John surgery that essentially ended his career, would leave him with a 98-110 lifetime record.

By all accounts, Andy Ashby was a model citizen during his tenure with the Dodgers. He didn't give Kevin Malone anything less, or anything more, than he asked for. 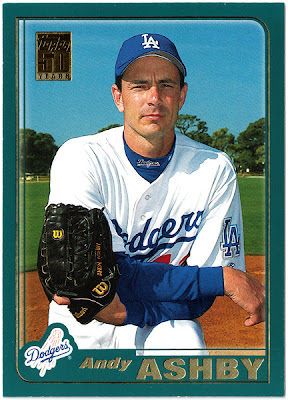 This card shows the veteran hurler in his first spring training as a Dodger, in a crisp new white uniform, determined to do his best to live up to his contract. That's probably the best way for a Dodger fan to remember Andy Ashby, so it gets the nod to represent the Kansas City native in the PWMD Set.
Posted by petethan at 8:17 PM