Diamond King Is a Bloggin' Prince 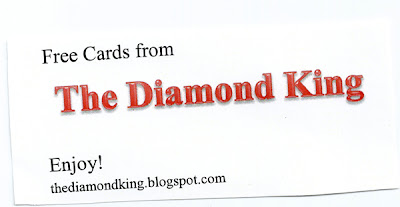 The most fun I had on Friday's Card Night this weekend came from the bomb dropped on me by The Diamond King, Kevin, after I responded to his generous offer to participate in his Weekly PWE Sendout Project. I had mentioned that I was a Dodger fan, with a particular interest in veteran pitchers. I thought I might find a seventh copy of a 1989 Donruss Orel Hershiser in my mail someday, and pretty much forgot about it. Well, I love surprises, and Kevin's PWE certainly did not disappoint. Let's play... 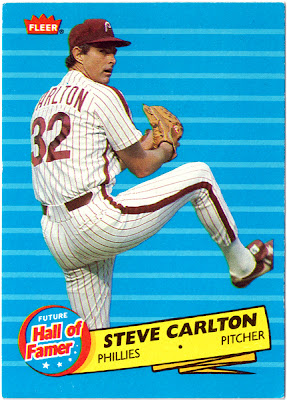 I've never seen one of these, which (especially considering that it comes from the '80s, my collecting wheelhouse) really cranks up the fun-o-meter. The most intriguing thing is that the set only consists of six cards. I don't know how they were distributed. There really weren't many "inserts" in the 1980s. And I have no idea who, exactly, the other five players Fleer predicted Cooperstown plaques for were. Rather than look into it, I'm going to hope to be surprised with others at some point, whether through repacks or blogger bombs. 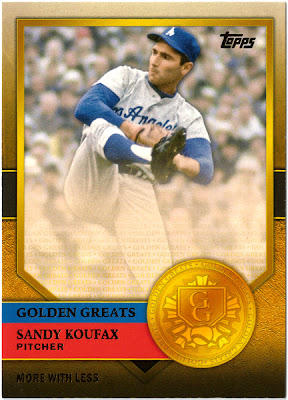 Not only a Dodger, and an all-time favorite of mine, but a real card need. I didn't really fall in love with 2012 Topps, so rather than spend the big bucks hunting the set through packs, I just bought the factory set. So, no inserts. And this is a nice-looking set. The card commemorates Sandy striking out the side on nine pitches to start his first career no-hitter in 1962 against the Mets. 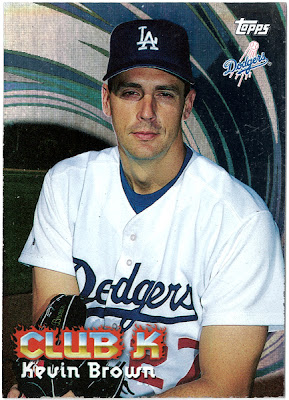 From my collecting dark period. Never seen or heard of Topps All-Matrix. Typical of the early days of super-shiny cards, with lots of foil. Brown was a first-class jerk, but had a nearly HOF-worthy career. 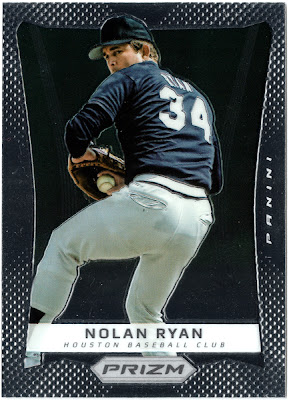 I wasn't even aware there was a 2012 Prizm set. I picked up a pack of 2013 a few weeks ago. Talk about shiny! Pretty nifty card of the Strikeout King, as we get a peek at his concentration and his grip (two-seamer or curveball?). Easily the most subdued Astros uniform you'll see from that era, thanks in part to Panini working around licencing issues. (Update: Turns out it was 2012 Prizm that I bought. It's one of those confusing sets where the copyright date is different from the issue date. I hate that!) 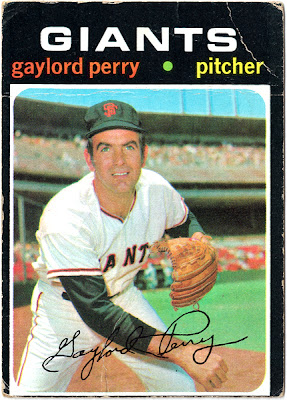 Whoa! A forty-plus-year-old card of a Hall of Famer. Friggin' sweet. Wasn't expecting that! I'm no stickler for condition, so the centering issues, creases and edge-wear do nothing to diminish my enjoyment of this card. The Giants uniform on the other hand... 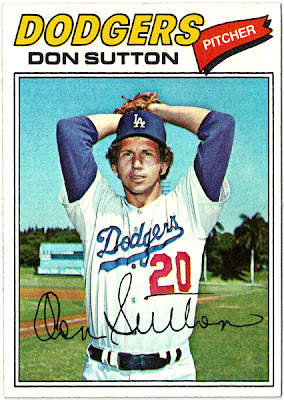 Cards in poor condition don't bother me. But that doesn't mean I don't have a little extra appreciation for a vintage card in really nice shape. Especially when it's a Dodgers Hall-of-Fame pitcher. This 1977 Topps Sutton is beyond generous. It's a simply beautiful card, and I'm so grateful to Kevin for sending it, and the rest of these way-fun surprises, my way. Fortunately, I was able to help him out a little with his SCAM Project, which I encourage you all to check out. Thanks again, Diamond King, you're a real prince. Enjoy, indeed.
Posted by petethan at 8:22 PM