Playing With My Dodgers: Ed Amelung

Sitting on the Dodgers bench
Eyeing Maldonado with bad intent
Never getting playing time
Can't hit his weight, so he's riding pine
Amelung
Tanning in the LA sun
Watchin' his teammmates have all the fun
Amelung
Feeling like a lame duck
Albuquerque-bound, he thinks, "What the fuck?"
Whoa, Amelung 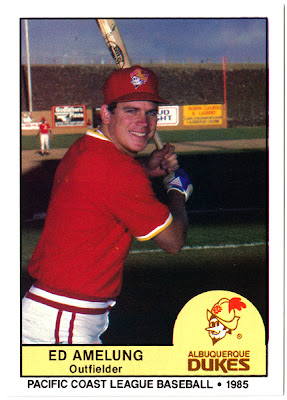 Sure, Amelung played for the Dodgers. But for him that primarily meant playing for the Albuquerque Dukes. This card comes from his third of four full seasons (and parts of two others) that he spent in the Land of Enchantment. It's from the year between his first cup of coffee in LA and his final little sip in '86. That makes this an appropriate card to represent Ed in the PWMD Set.
Posted by petethan at 12:25 PM