Ho Hum. Just another stack of '70s Topps awesomeness from the Night Owl's days as an owlet. Let's play... Topps did the "peering in for a sign" pose a lot. But it wasn't often that you got a full-body side view like this. And Rogelio is really selling it, isn't he? Never mind that the catcher appears to have gone into his squat somewhere out in short center field. By the way, the Braves should bring back those feather designs on the sleeves. Those were sweet! 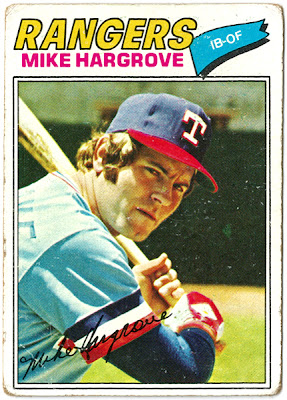 Before the Topps photographer could take this picture, he had to wait for "The Human Rain Delay" to step out of the imaginary batter's box, adjust his cap as though it were a helmet, adjust his batting glove to make sure it was tight, pull each uniform sleeve up about an inch, wipe each hand on his pants, reach back to adjust his rear pockets, knock the dirt from both of his cleats with his bat, flex his shoulders, adjust the glove again, wipe his nose, rub his tummy, call home to make sure the stove was off, tug on his ear as a greeting to his dead dog, wink suggestively at the umpire, brush his teeth, and repeat the sequence eight times before he was good to go. 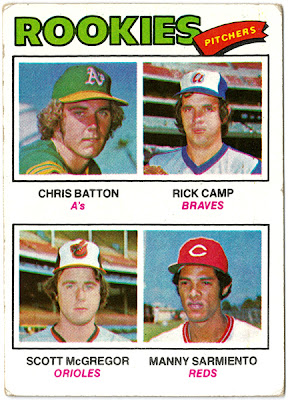 Somebody should tell Scott McGregor that it would be a good idea to grow a mustache... 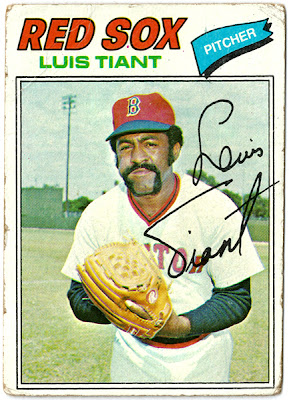 I already had this particular gem, but upon receiving another I noticed something interesting for the first time. Tiant's autograph extends beyond the border of the photo's frame. Was Topps being cool, or did they make a mistake here? I'm now on the lookout for other examples of this, but so far no dice. Mistake or not, I dig it. It's a daring example of coloring outside of the lines, which isn't something Topps is known for doing. 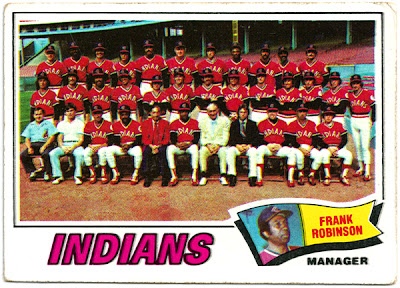 This is sweet. Frank Robinson pictured with his team in his final season as a player/manager. That makes this card a favorite. Let's flip it over... 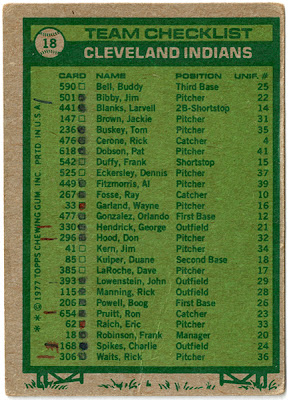 I can only assume that these markings come from Greg, himself. Usually, when you get an old checklist card that's been marked you have no idea who did it. It's kinda neat to know the lineage of the markings. It looks like he was missing Eck, though I doubt he lost much sleep over it at the time. I'm guessing that the lines on the left meant duplicates. If so, it appears that Greg traded a spare Charlie Spikes at some point, probably to someone who thought his name was cool. Wonder what he got in return...

Another "pack" of Night Owl's kiddie cards comes to completion with the customary cartoon (courtesy of Rogelio Moret): 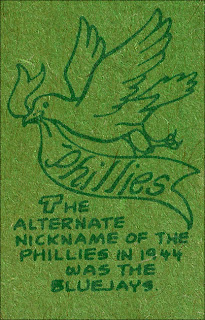 This made me do a double take when I first learned of it a few years back. Kinda puts an odd new slant on the 1993 World Series match-up.
Posted by petethan at 12:08 PM