As I was watching the Dodgers, behind the best pitcher in baseball, complete their dismantling of the defective Nationals yesterday, I was feeling pretty good. The Blue Crew was firing on all cylinders to start the second half of the season. Matt Kemp launched a bomb into the left field bleachers in his first trip to the plate following his latest DL stint. By the fourth inning, he'd added two more run-scoring hits, and the Dodgers were running away with their third win without a loss following the all-star break. I'd scanned this nifty blue Heritage parallel and had planned to celebrate the good vibes with post titled "Welcome Back," which would simply display the joyously Dodger Blue piece of cardboard. 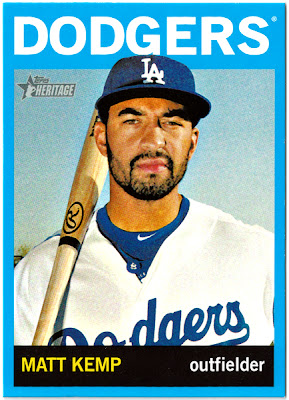 It was perfect. Kemp back in blue, scowling with fierce determination to have a monster second half to help lead his team to the promised land.

It would have been a nice story, if it had ended there. But I'm an "It ain't over 'til it's over" kinda guy, for better or worse. So I hung in there, watching until the end. Despite the excitement of a Dodger beat-down, the good vibes faded early. That's mainly because, since the Dodger broadcast was on on KCAL 9 in LA, and therefore not carried by MLB Extra Innings, I had to listen to several innings of some very disappointed, depressed and pessimistic Nationals broadcasters. Eventually they became so fed up that they essentially stopped talking, which would usually be nice except that the Nats' crowd sounded bored and hostile. Then the skies grew dark and it started to rain. You could actually see lightning reflecting off of the faces of the players at times. Things had slowly turned ominous.

Then, of course, Kemp managed to roll his ankle in an incredibly pointless freak play at the plate with the Dodgers up by seven runs in the ninth inning. That's when I knew I would have to drag out this variation to scan instead. 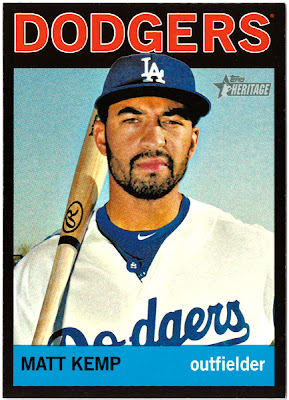 Suddlenly it was the black card that most appropriately reflected the mood of the moment. Black, as in mourning the loss of Kemp from the Dodger lineup, again. Matt's fierce scowl of determination had turned instead to one of disgust and frustration.

As of this morning, I still don't know if Kemp will be okay to play in Toronto, or whether he'll be headed back to the disabled list. So I think it's appropriate to use both cards in this post. Black and blue sounds about right.

Interestingly, I don't actually have the regular white-bordered version of this card, which is appropriate considering that Kemp has had no kind of regular season so far in 2013.

Of course, it ain't over 'til it's over, and I'm still hoping that I have a reason to need one of those sparkly, shiny parallels to express my mood come October, when a World Series trophy erases the black the blue and every other mood that this roller coaster season sees fit to bestow upon Matt Kemp, the Dodgers, and their fans.
Posted by petethan at 12:11 PM