Had a rare, of late, full three-night Card Night weekend last week. By which I mean about a week and a half ago, now. Little behind. All work and no play this week, I'm afraid. Time is short. So, while we can, let's play...

Continued to bust '13 Topps series two. Got another WBC card. Giancarlo Stanton this time. From the good ol' USA. I have purposely avoided looking at the checklist for this subset that I'm excited about collecting, and I'm beginning to be afraid that it's gonna be nothing but MLB players, mostly from Team USA. I love my country, and all. But I'm hoping for a diverse checklist here. Not sure I'm gonna get it. All I can say is that there'd better be a Shinnosuke Abe card in there somewhere. (But don't tell me if there is, cuz I wanna be surprised. That's just the way I am.)

Moving on to things I can show you, I busted another pack of '05 Topps Total from my vacation blaster. 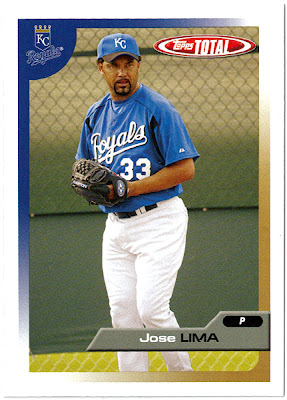 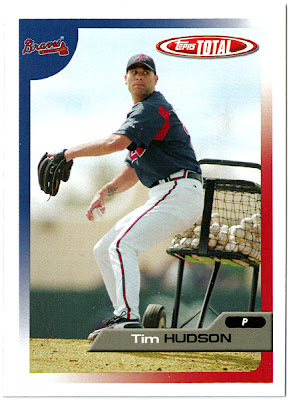 I love the old-school card stock. But I'm not thrilled by the design. I didn't really notice how awkward the Topps Total logo was until it was Lima Time. It's the first card I've seen so far from the set that effectively uses the entire height of the photo area. It's next to impossible to fit anything in up there with the logo taking up so much space. I also dug this Tim Hudson card, featuring a cart full o' balls. But the whole pack got dragged down by the appearance of a shiny Barry Bonds "Total Award Winner." Bonds is a total something, all right, but he ain't getting any awards from me... 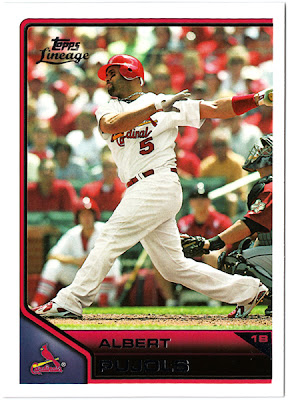 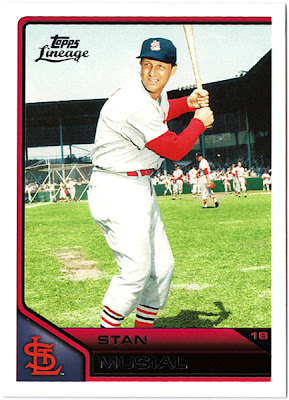 Much better. Another pack to bust: '05 UD First Pitch. 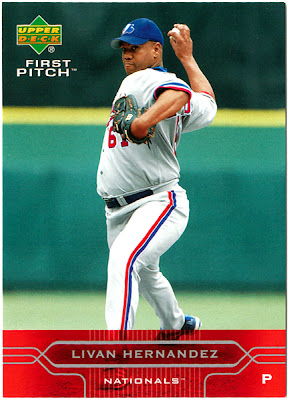 Livan from the transition year from Expos to Nationals. This card got me thinking about how completely, at least in my mind, the break has been made between these two phases of this franchise's history. I don't tend to think about the Expos anymore when the Nats come to mind. And that's just a function of the franchise having changed the team's name when they moved. On the other hand, for example, I certainly do think about Boston and Milwaukee when the history of the Atlanta Braves is brought up. Just because they kept the team name. In both cases it's a single franchise that moves from one city to another, taking its players and staff along. The only difference is the decision whether to change the name or not. Interesting, no?

Moving on to the repack goodies... 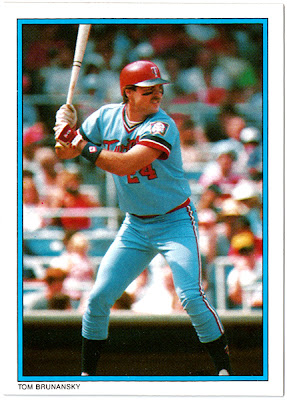 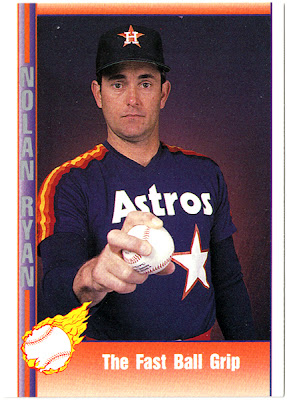 I have fewer of these glossy send-ins than I would have thought. Despite collecting heavily in the '80s, I was apparently too lazy to drop a few wrappers in the mail. I really dig this Bruno card, with his powder blue road uni matched by the card's border. Sweet. The Nolan Ryan card was a cool pull. I'm ambivalent about sets like this because they tend to feel gimmicky and wading through a full set can cause subject fatigue. But getting this single card was fun, even if Pacific doesn't seem to understand that fastball is one word. 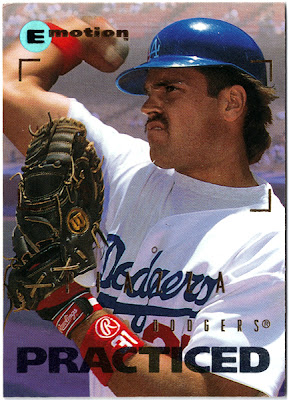 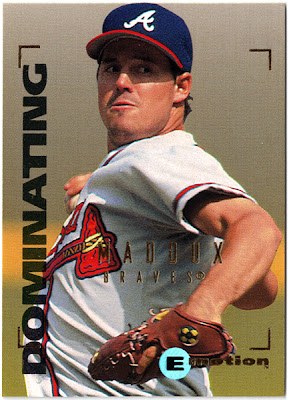 These Emotion cards were, frankly, kinda lame. It caused Fleer (or SkyBox, if they were actually different people... it all got so confusing in the '90s) to have to come up with a different word for each player. The result at times was, like I said, lame. Okay, Maddux was dominating. But "practiced?" That's the best they could do for Piazza? Of course he's "practiced," he's a big league ballplayer. Yup, lame.

I managed to do pretty well at filling some set-building needs on this night, particularly by nabbing more than a handful of '96 Circa. But my favorite, by far, was this excellent addition to my nascent '94 Select collection. 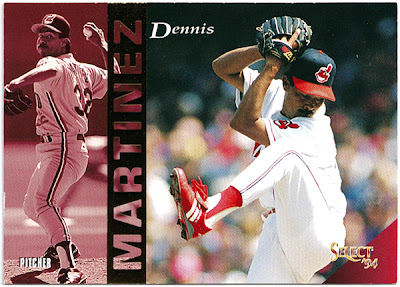 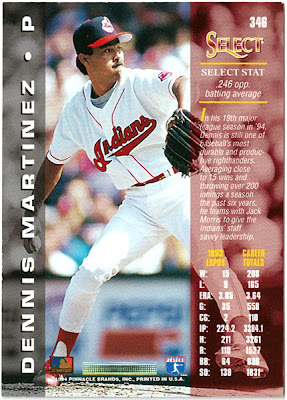 One of the main reasons I like this set so much is that I think pitchers tend to look particularly good on this design. And El Presidente was one of those guys who almost always managed to look good on cards. So you've got the perfect sweet cardboard storm here, my friends. Can ya dig it?

I dug into the small box of random junk that I bought from a random dude on my random vacation, and I pulled out some junk wax and a couple of ratty-lookin' '71s. 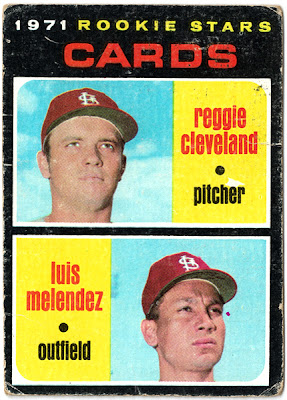 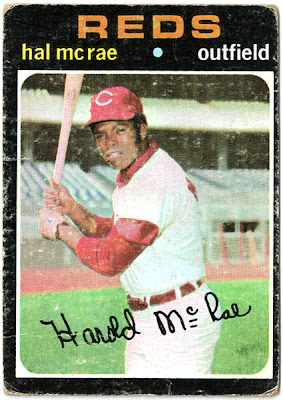 Ratty or not, these are fun to have. But I wanted to see something nice, so I ended my night by digging out one of the individual cards that I bought from that card shop. I chose this one for a reason. I was hoping that I had picked up the '71 Dick Allen card, featuring him as a Dodger. I remembered considering it, but not being sure whether I had it yet or not. I'd seen the thing a buncha times on the ol' internet box. Apparently enough times to think I already had it. I don't. Which sucks. And the '71 Dodger I picked up turned out to be... 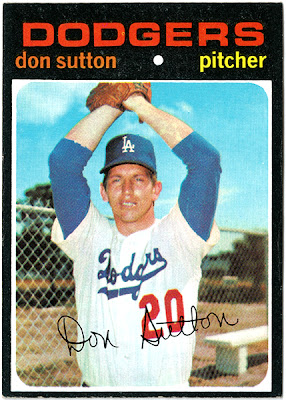 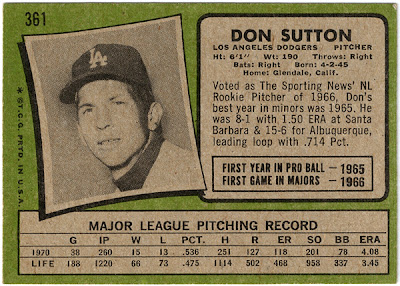 Okay. No complaints. A pitcher. A Dodger. A Hall-of-Famer. A dude wearing a sweet turtleneck on the flip side. It's all good.

But I still don't have the Dick Allen for my PWMD Set. Oh well, something to aspire to, I guess.
Posted by petethan at 7:29 PM