Playing With My Dodgers: Rick Auerbach

Rick Auerbach likes to tell people that the Dodgers retired his uniform number, 1, which is true... 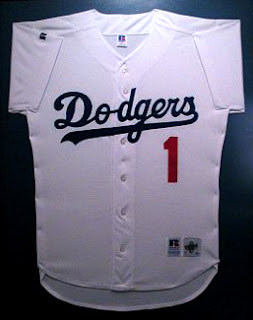 Except that it was retired for another Dodgers shortstop named Pee Wee Reese.

The better reason to associate Auerbach with the number 300 is the fact that he's best known today as an excellent bowler in his hometown of Woodland Hills, CA, where the 63 year old has bowled upwards of ten 300 games.

Also, Rick Auerbach is not Red Auerbach, which is not something I could keep straight as a kid. Turns out Red Auerbach was a basketball coach. I'm such a one-sport guy that I had to look that up, which probably has a few of you shaking your heads. 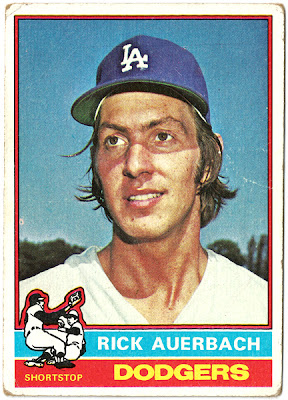 The Dodgers looked great on these red and blue '76 Topps cards, with their cool clip-art icons for each position. Plus Auerbach is sporting a fabulous '70s "I just rolled out of bed and it's been three months since my last haircut" look. Welcome to the PWMD Set, Red... I mean, Rick.
Posted by petethan at 2:37 PM