Last weekend I took a break from the card busting habit to advance the marathon sorting project an inch or two closer to the finish line. Next weekend my son, Mathew, is getting married, so I'll be a little busy. That means this weekend's Card Nights have been a little extra indulgent. So, c'mon, let's play...

I opened three packs of 2013 Topps product. Per usual, I won't be showing the current season's cards here. A hobby pack of Archives was unspectacular, with an '83 All-Star Ryne Sandberg really the only card of note. The most interesting thing in a Bowman pack was Raul Mondesi's son, Adalberto. And a pack of series two flagship netted me a '72 mini Reggie Jackson while plugging doggedly away toward base-set completion.

Meh. Let's try something else. 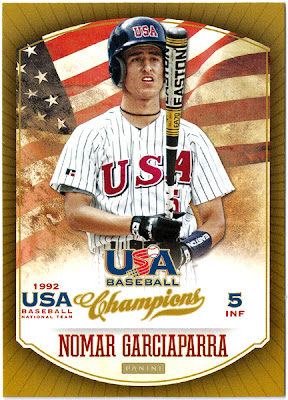 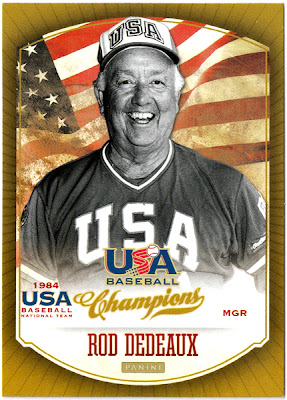 Haven't picked up too many of these Panini USA packs, but I've really enjoyed the few I've opened. I'd previously hit upon a shiny die-cut Frank Thomas, and cards of Ken Griffey, Jr., and Frank Robinson as a coach. Plus, of course, a bunch of kids I've never heard of before, and will probably never hear from again. But you never know, and that's part of the fun. Still, it's the people I know that interest me here. I guarantee that this is the only Nomar card I have in which he's using an aluminum bat. But it's the Dedeaux card that made my face light up when I saw it. Despite getting the Robinson coach card a few weeks ago, I hadn't put the pieces together to the extent that I was expecting the possibility of pulling a Dedeaux. I explained why I dig the dude when declaring his 1985 Topps card my favorite of that set on Top of the Topps, if you're interested. 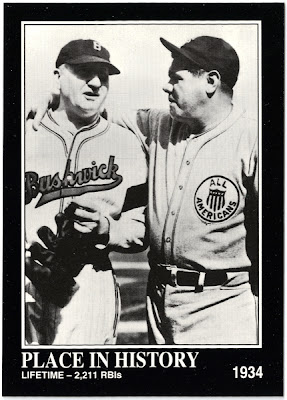 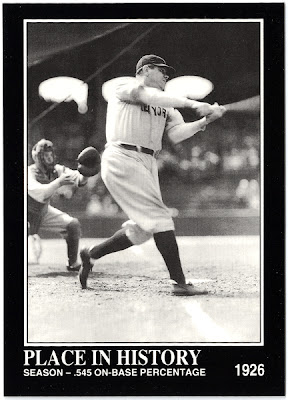 A couple of months ago I picked up The Babe Ruth Collection at an antique mall. They were the only cards in the place, and I didn't want to leave empty handed. I had a few of these cards already, and found them vaguely interesting. But I was young enough when I first saw them that the black and white photography and repetitive subject matter lulled me into a state of disinterest. Now, I adore the things, as I do the fabulous Conlon Collection. The photography is generally spectacular, and the content diverse. As with other recent acquisitions, I'm going through these at a pace of about ten cards at a time each weekend. The card above with the Bambino posing with Honus Wagner is one I would have actually disliked at as kid. If a retired player wasn't a manager, I didn't think he had any business showing up on a card after his playing days were over. I'd be thinking, "Get off of my card, old man! You're wasting my time." Now that I'm rapidly approaching the days of blissful senility myself, I've really come to appreciate these opportunities to get a little closer to knowing some of the greats of the game. I think this card (featuring a shot snapped during a barnstorming tour) is particularly interesting because I've seen tons of pictures of The Flying Dutchman as a player, and then again as a severely-bloated Pirates coach in the '40s and '50s, but very few from this transition period. 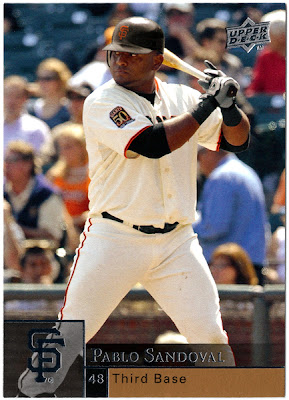 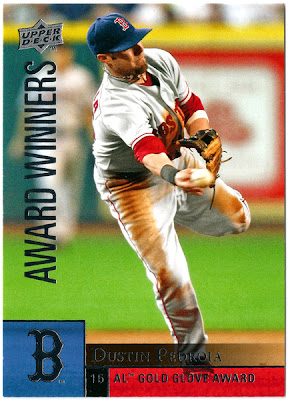 Next up, half a hanger pack of '09 Upper Deck Series 2, the last really beautiful UD set to date. I pulled a nice-looking card of current Marlins manager Mike Redmond, the back of which informed me that he was acting a Joe Mauer's backup. The next card in the pack? Joe Mauer. Also got a Cliff Lee card that declared his selection as the AL's Cy Young Award winner the previous season a "no brainer." Then there were the two featured above. Kung Fu Panda's looking particularly svelte. But it's the bright and kinetic Pedroia card that really caught my eye. Unfortunately, UD has a bit of an annoying disconnect moment, talking about nothing but his hitting on the back of a card celebrating his Gold Glove Award.

The repacks I busted on this night were really quite lackluster. I gave 'em a fighting chance, opening up three varieties: half of a clear plastic Fairfield job from Target, and one each of Prestine and Super Jumbo Pack (baseball only) from the dollar store. Not a single "wow" card. Got a few hits on some sets I'm chasing for completion, though. Saw a few things I'm hoping I already had, cuz they have mini-collection written all over 'em. And I did come up with a really nice-looking Wilton Guerrero card, but it's a serious PWMD Set candidate, so I'll save it for now. Oh, and I noticed for the first time that Eddie Murray is lurking in the background of Orel Hershiser's 1990 Donruss monstrosity, for what it's worth. 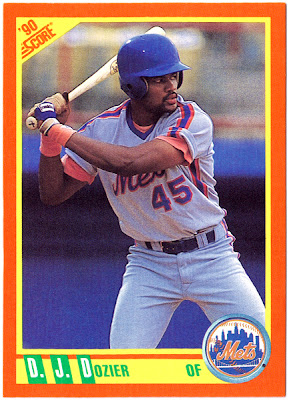 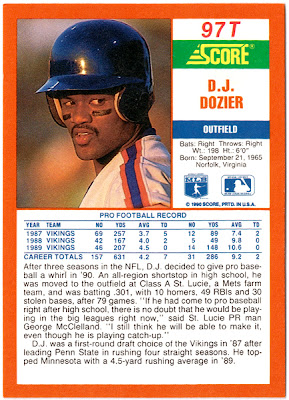 I'm strictly a one-sport guy. But when I saw this card, I knew enough to think, "Isn't he a football player?" So I turned the card over... turned the baseball card over... to see the guy's "Pro Football Record." Am I supposed to know the two stats referred to as "NO"? Number of what? Anyway, turns out Dozier didn't exactly whirl around the base paths with any regularity, hitting .191 with two RBI in his 54 big-league plate appearances. I wonder if he went back to football. No, wait, I guess I don't wonder, 'cuz if I did I'd just have to type his name into a search engine. And I'm not doing that. 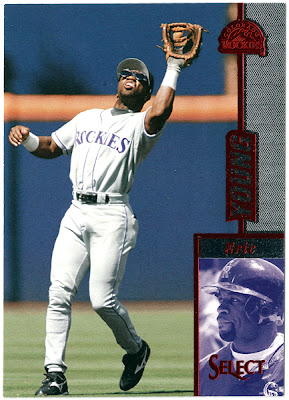 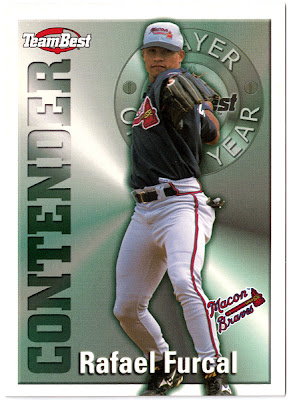 Here are a couple of one-time Dodger infielders on mildly interesting cards. Score Select is something that's really catching my eye in hindsight these days. I've become a huge fan of the '94 set, which I'm looking to complete from virtual scratch. While not quite as nifty, these '97s ain't bad, themselves. Kinda look like a shiny-foil-era version of '84 Topps. The Furcal is from some kind of 20-card "Promotional Purposes Only" set. I seriously doubt it's rare, considering the source. But it's always kinda neat to get minor league cards of long-time big leagers.

To alleviate the bit of the blahs brought on by a below-average night of pack busting, I began taking a closer look at some of the individual cards I bought at A&J Sports Cards in Eugene while on vacation, so that I can begin folding them into my collection. I grabbed five cards. One was a 2007 Topps Chrome Greg Maddux, Gold Glove Award Winner, Dodgers. I still like the non-shiny version better. Another was a sweet piece of vintage that I'm saving to pair up with another of my purchases in a later post. And there was another solid PWMD Set candidate. So that leaves these two: 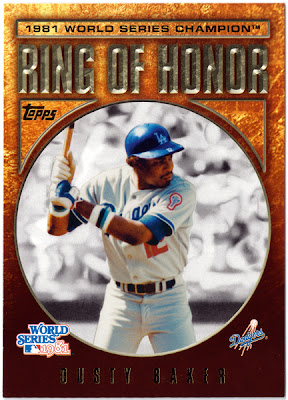 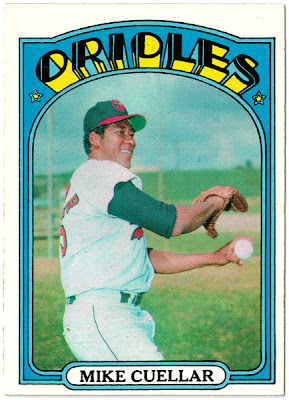 I love the Baker card because it's evocative of his distinctive rhythm in the batter's box, in which he would repeatedly pump his bat forward smoothly until coming to a rest with his chin planted firmly on his shoulder. I also dig the 1981 World Series logo, as I do anything connected with that Dodger beat-down of the Yankees. Though I do find it kinda funny that Dusty gets honored for his participation in that championship on a card that also lets you know that he hit .167 in the World Series.

As for the Cuellar, well, it's a vintage psychedelic tombstone, and he's a crafty lefty hurler. Good enough for me. Turning the card over, I couldn't help but wonder if maybe we have a few more Mondays with Hoyt ahead of us, after all.