Habit: A behavior pattern acquired by frequent repetition or developed as a physiologic function and showing itself in regularity.

Sounds about right to me, Webster's. Besides enjoying my first taste of Kerry's Marlins package on Saturday's Card Night, I opened a few packs as usual. Let's play...

I busted the first pack out of my vacation blaster of '08 UD Heroes. People seem to like these. My feelings are mixed. I like the general design, with the super-glossy picture poppin' outta the circle, though I'm not crazy about the background color and texture. The real problem I have with this set, though, is context. Each card purportedly recognizes a specific achievement by the player portrayed. For example, in this pack I got Scott Kazmir (Leading the League in Ks) and Phil Hughes (First ML win). Okay, I guess. But I also got Troy Glaus (in a green parrallel numbered to 499, incidentally), and his great achievement was an eighth-inning game-winning double against the Astros in April. So, obviously, UD was just looking for any excuse to include the players they wanted to include. Kinda cheapens the concept. They're not all bad, though. I also got a Kevin Youkilis (grey parrellel) commemorating an errorless season at first base. With my penchant for pitching, though, I liked this one best: 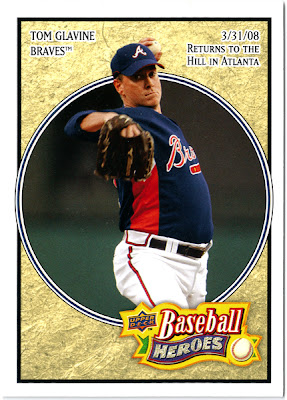 Though I'm not enthralled by the spring training shot, I do like the idea of celebrating the crafty lefty's return to the scene of his greatest successes.

Next up I opened a pack of 1989 Star minor league cards. I usually dig minor league cards for the occasional funny name and/or crazy uniform. Got none of that here, but it was still fun. Spotted a couple of guys who made the show. In fact, Cooper was a two-time all-star with the Red Sox. 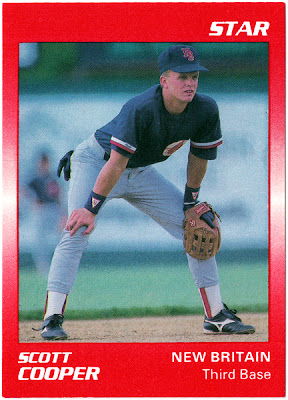 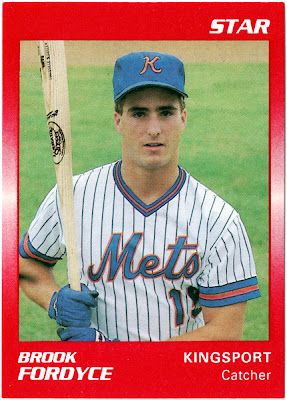 When I turned over Cooper, I was surprised at the amount of information Star had dug up. Of course, they're amateur-looking cards, but I was pretty impressed with the effort they'd made. 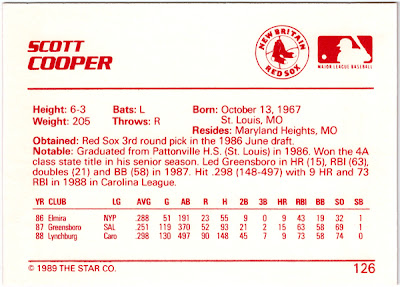 Then I turned over the Fordyce card... 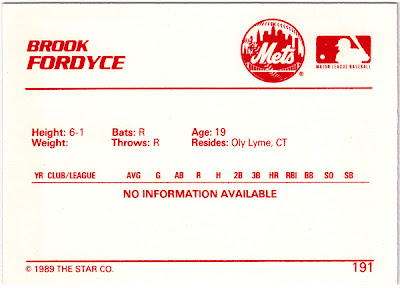 I also pulled what was, no doubt, the "key" card in the set at the time. 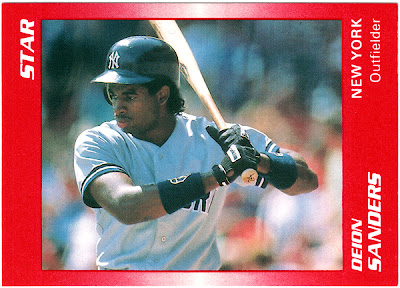 I'm guessing he was the only big leaguer in the set.  They probably had some special licencing agreement or something.  Not a bad looking card.  The confused look on Neon Deion's face in the batter's box is appropriate.

And now, on to the night's repack finds... 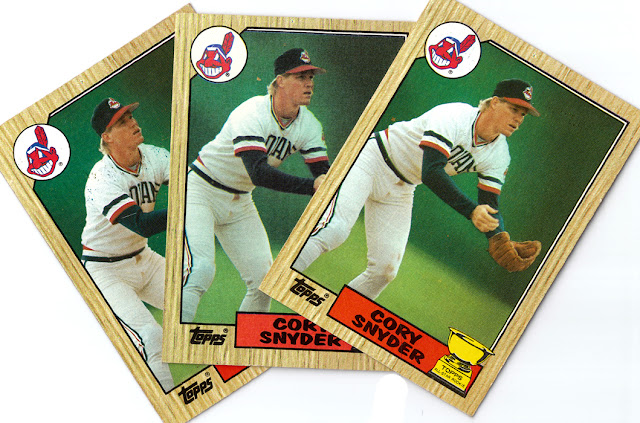 Not cool, Super Jumbo Pack! Though it does give me an excuse to let you know that, as soon as 1986 wraps up, 1987 Topps is due to begin its run at Top of the Topps sometime this weekend.

I always wonder about the origins of the cards in these repacks.  Obviously, the bulk of them come from people dumping their junk wax collections, probably for peanuts, en mass.  I can imagine that the process of de-collating, or un-sorting, or whatever you wanna call it, is probably difficult without damaging the cards too much.  That's probably why you get things like the Snyder-palooza here.  But you also can get an arcane glimpse into people's sorting habits.  And I'm just enough of a card nerd to find that interesting.  For example, the first three cards I pulled from that repack were all black-bordered cards from different sets. 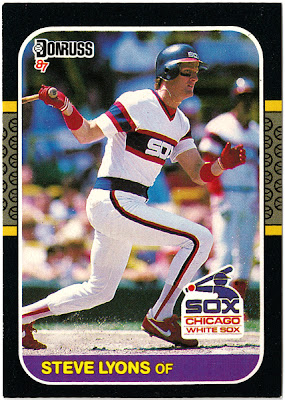 Why do card manufacturers have such a hard time coming up with good designs for black-bordered cards?  Not to give anything away, but I can guarantee you that 2007 ain't gonna be anywhere near Top of the Topps.  Pretty much every Donruss design from the '80s sucks, so that one's no surprise.  But what happens when they do the black border thing?

"Okay chief, it's time to finalize this year's design.  What's the plan?"  "What do you mean, what's the plan?  They've got black borders, right?"  "Well, I think they might need a little more to them than that, don't you?"  "I don't know.  Just put some colored squares in the corner, or something.  Or maybe make it look like the card got run over by a car with baseball-treaded tires on the Yellow Brick Road.  Who cares!?  They've got black borders, so they're automatically cool, right?"  Wrong. 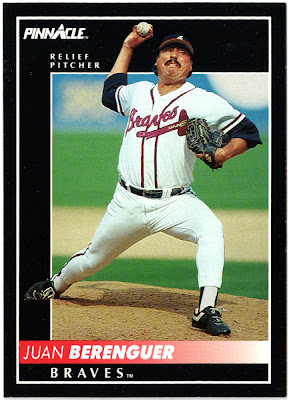 At least the '92 Pinnacle looks nice.  Not exciting, and the font choice is uninspired.  But a nice-looking card, nonetheless.  I think maybe the key is to design a card that would look good if the black and white elements were reversed.  That way, you're not leaning entirely on the card's "blackness" to make it look good.

Okay, let's wrap this thing up with a little redemption for the repack. 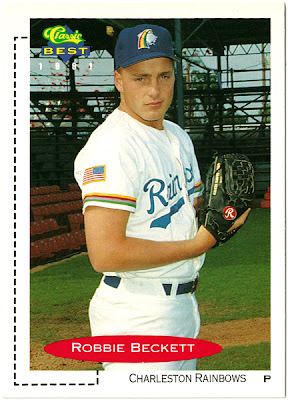 Classic.  Best.  Yup.  Everything that the Star pack failed to deliver.  Dude tossed seven big-league innings in  his career, posting an 11.57 ERA with the Rockies.  But (as much as he might wish you could) you can't take this friggin' fabulous card away from him.  How much does it look like he's loving wearing a cap with a rainbow on it?  Incidentally, the "cloud" behind the rainbow is actually in the shape of South Carolina, with a star where Charleston is.  Rainbows and stars at the same time!  How great is that!?
Posted by petethan at 11:59 AM