Playing With My Dodgers: Jim Wynn

From the vantage point of the 1970s, a career .250 hitter who routinely struck out over a hundred times a season wouldn't have looked like a player who belonged in a conversation of all-time greats. To the Sabermatricians of today, looking at a power hitter with a lifetime .366 on-base percentage, it's a different story.

The raw numbers put up by Jim Wynn in his fifteen-year major-league career are impressive, no matter how you look at them. Then you factor in the home ballpark in which he spent the majority of his career. The Astrodome was one of the toughest parks on offense that modern baseball has seen. Next, you consider the era in which he played. Wynn's age 26 season was 1968, aka, "The Year of the Pitcher," which was the pinnacle of baseball's second dead ball era.

OPS+ attempts to adjust for context, allowing for a more level playing field when comparing players from divergent run-scoring environments. Wynn's career OPS+ of 129 is equal to that of no-doubt Hall-of-Famer Eddie Murray. Now consider the fact that Wynn played center field and stole 225 bases in his career to go along with his 291 home runs. Finally, keep in mind that "The Toy Cannon" clocked in at just 5'10" and 160 lbs., and you have an argument (one that's been made by many) that Jim Wynn might just be the most underrated player in modern baseball history.

Coming to the Dodgers in 1974 in exchange for veteran pitcher Claude Osteen helped to improve impressions of Wynn's value. But not as much as it should have. Los Angeles found itself playing in a World Series in Wynn's first year with the club. The centerfielder made the All-Star team, unbelievably for only the second time in his career. And he was named the NL Comeback Player of the Year, after nothing worse than an average season (107 OPS+) for Houston in '73. But he finished fifth in the MVP voting, and third among players on his own team. The winner, Steve Garvey, posted a slash line of .312/.342/.469. Wynn: .271/.387/.497. It really was all about batting average back then.

How about a little appreciation for "The Toy Cannon," Jim Wynn? 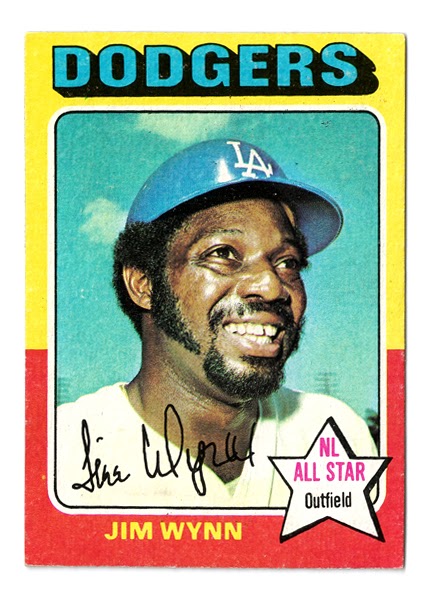 Speaking of appreciation, this is the final PWMD inductee (for now?) from the Vintage Virtuoso, Mark "Harry" Hoyle. And it's a true gem. To my way of thinking, it is the perfect card to represent Wynn in the set. I will not be using a '75 Mini for any other player. But for "The Toy Cannon," it couldn't be more appropriate. There might be a better-looking card in the '75 Topps set, but you'd have to really dig to find it. The fantastic primary colors of the border, the big ol' All-Star star, the sun-shined helmet, those sweet sideburns and Wynn's "I'm just happy to finally play for a winner" gap-toothed smile all conspire to achieve aesthetic perfection. I mean, the card is so colorful that it manages to make the bright blue sky look dull by comparison. Take that, nature! This is what a PWMD card is all about. As John Hart would say, "This is what they look like." And as I would (and do) say, thank you again, Mark. Your impact on my collection has already been profound, and will always be appreciated.
Posted by petethan at 9:33 AM