Playing With My Dodgers: Jim Campanis

Just how far does nepotism go?

Jim Campanis was "scouted" by Dodger scouting director Al Campanis (who happened to be his father), leading Los Angeles to sign the catcher as an ametuer free agent in 1962.

In his major league debut, the only game in which he would appear in 1966, Jim Campanis caught the final two innings ever pitched in the regular season by Sandy Koufax at Dodger Stadium.

By the end of 1968, Al Campanis, now serving as general manager, would send his son to Kansas City for a couple of minor leaguers too inconsequential for Baseball Reference to mention by name.

I guess there's your answer about nepotism, at least when it comes to baseball.

P.S. Jim Campanis batted .147 in the remaining 143 at bats of his career, proving that his father was a shrewd GM... I guess. 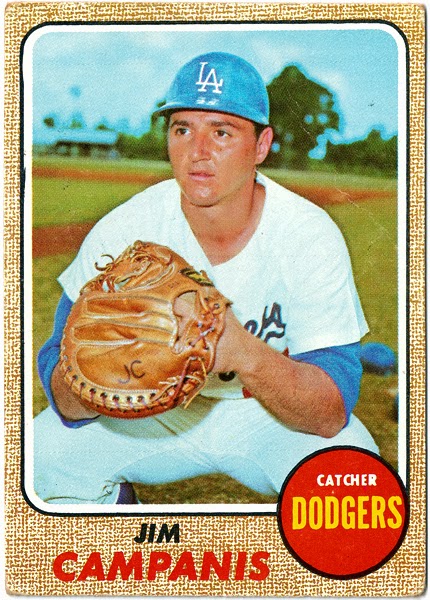 Here's the third of four PWMD inductees from the latest delivery from Mark "Harry" Hoyle. We can see from Jim's catcher's mitt that his initials afforded him the opportunity to both label his possessions and make a religious statement at the same time. Taking a look at his big-league stats, I would be inclined to throw the middle initial of "H." into the mix...
Posted by petethan at 2:45 PM