Playing With My Dodgers: Jim Brewer

The best story about Jim Brewer stems from an incident that took place when he was a young Chicago Cub in 1960. The lefty had the nerve to brush back Billy Martin, then of the Reds, who responded by throwing his bat at Brewer and then coming out to the mound to land a haymaker that broke Brewer's cheekbone. The story's epilogue would come nearly a decade later, in the middle of Brewer's long stint with the Dodgers, as he was awarded $10,000 in damages from Martin as a result of a successful civil suit.

Brewer was a constant in the Dodgers' highly-successful bullpens of the '60s and '70s. The Cubs are often lampooned (for good reason) for dealing away future Hall-of-Famer Lou Brock for pitcher Ernie Broglio. But the deal that sent Brewer to the Dodgers for the 1964 season in return for pitcher Dick Scott (remaining big-league career: four-and-a-third innings, 12.46 ERA) was no prize-winner either. Brewer spent twelve seasons with the Dodgers, helping them to three National League pennants, including a World Championship in 1965. He would compile a stellar 2.62 ERA and 125 saves in Dodger Blue. His 6.89 hits per nine innings ranks third in franchise history, bettered only by Sandy Koufax and Clayton Kershaw. 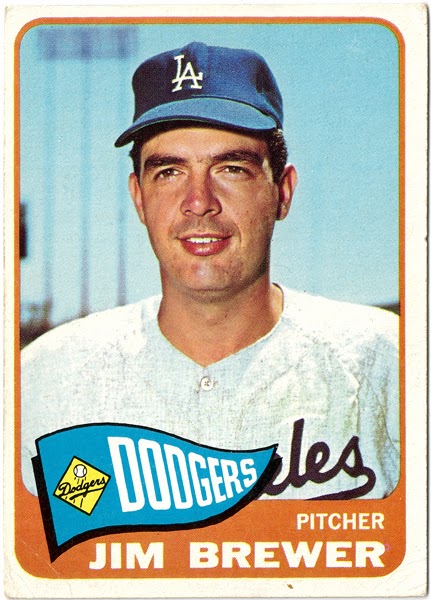 This is the first of five spectacular cards for the PWMD set sent in the trade package that I've been raving about from Harry/Mark, New Englander and longtime citizen of Red Sox Nation (he's no front runner!). I had long admired this particular card. You don't find much better examples of the portrait variety. I've used the photo from the internet numerous times for various projects. I already had Brewer's 1967 Topps card, which is also very good, and I almost used it for the PWMD set. But I decided to wait, in the hope that this one would land on my doorstep one day. I had no idea it would happen so soon. And this isn't even one of the cards I'd mentioned needing! Thanks again, Mark!
Posted by petethan at 3:16 PM