Playing With My Dodgers: Dick Allen

Dick Allen spent perhaps the quietest season of a very, very loud career with the Los Angeles Dodgers in 1971. I'm not going to go into the details of Allen's colorful career, as the stories are well known, and little to none of them have anything to do with his time in Los Angeles. Suffice it to say, Dick (or Rich, or Richie) had Hall-of-Fame talent, and nearly put up Hall-of-Fame numbers in his career, but managed to get sidetracked more than once along the way.

His brief time in Los Angeles could easily have become more than a historical footnote, however, with the swing of a single game in the standings. It was a time of transition for the franchise. The team of the '60s was giving way to the youth movement that would become the core of the team's successful '70s run that culminated in a 1981 World Championship. Maury Wills, Willie Davis and Wes Parker were nearing the end of the line with the club. Steve Garvey, Bill Russell, Bill Buckner, Joe Ferguson and others were just starting to break into the lineup. Into that mix was added Allen, acquired from St. Louis for Ted Sizemore and Bob Stinson. Trailing the Giants in the NL West by eight-and-a-half games heading into the season's final month, the Dodgers almost managed to overtake their rivals, coming up just a single game short by season's end.

Allen saw significant action at three different positions in his brief stint with the Dodgers, starting 52 games in left field, 44 at third base, and 13 at first base, where he would often be moved late in games. His offensive numbers took an understandable hit playing in the pitchers' haven of Dodger Stadium. But, adjusted for context, his 151 OPS+ was just a few points shy of his career average. Who knows what the postseason may have held for Allen and the Dodgers if they'd managed to overtake San Francisco?

But they didn't, and Allen was dealt to the Chicago White Sox in the offseason for Tommy John and Steve Huntz. The controversial slugger would win an MVP Award for the Pale Hose in 1972 and go on to enjoy perhaps the best stretch of his career in the Windy City, his brief Dodger career left behind with only dreams of what might have been. 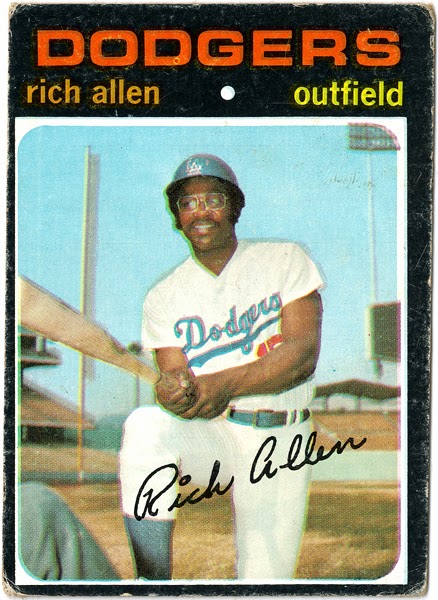 This iconic high-number card from the sixth and final series of 1971 Topps is one that every Dodgers collector seeks. From the unfamiliar uniform on one of the game's best-known characters, to the fantastic view of the left field foul pole, pavillion and scoreboard at an empty Dodger Stadium, and the heroic angle of the photo with the quirky appearance of the photographer's knee in the foreground, it's an unforgettable piece of cardboard. I automatically put it on the short list that I sent to Harry/Mark when he contacted me about trade possibilities. I had never really expected that it would actually be in the package that he sent my way. For a week now, I have been showing what Mark's generosity has meant to me, and this stands as a fitting grand finale. A parade of great pitcher cards and some sweet vintage Dodgers, including five fantastic additions to the PWMD set, is worthy of some serious gratitude. Thank you so much, Mark! You sure brought some great toys to this playground.
Posted by petethan at 11:24 AM