Playing With My Dodgers: Bob Lee

Bob Lee's career with the Dodgers consisted of four games early in the 1967 season.

He was then sold to the Reds, where his career would fizzle out by the end of the following season.

The best parts of the big right-hander's story were written before his trade to the Dodgers for Nick Willhite (another recent PWMD inductee). "Moose" had a fantastic rookie season for the Angels in 1964, and followed that up with an all-star campaign in '65. The reliever compiled a scoreless innings streak over the course of those seasons that reached 21, an Angels franchise record that was not broken until just last season by Jared Weaver. 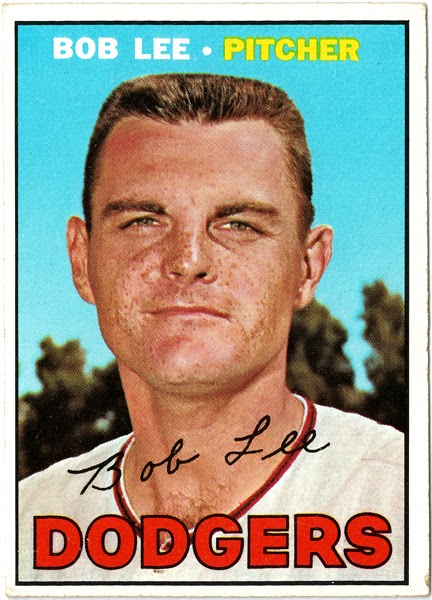 In this, the second of four new PWMD inductees to recently arrive courtesy of Mark "Harry" Hoyle, Lee still sports his California Angels jersey. But it's his military-grade flattop that really stands out. Yet another gem from the "Vintage Virtuoso."
Posted by petethan at 6:24 PM