When my Grandmother passed away at around the beginning of the year, I kinda hit the reset button as a blogger and collector. Obviously I got back into the ballgame quickly and whole-heartedly. As those of you out there reading are all-too-likely to understand, these little pieces of cardboard have done a lot to ease the transition into this new year.

One of the consequences of hitting the reset button, though, was that I took everything that had been waiting to be scanned and blabbed about here on this blog, and threw it all into the giant card-sorting factory that our dining room has become. So, while the Night Owl haul has continued apace, this sequential look at "packs" will end with the next one, as these are the last two for which I made scans before the "reset." Enough pointless explanations. Let's play...

An ex-Dodger joins the airbrushed expansion parade with one of the more jarring Topps attempts at updating a uniform. Between the airbrushed Blue Jays cap, the Twins jersey with the orange stripe, and the random yellow undershirt, this approaches Astros-level color vomit. Throw in the pink and radioactive green supplied by Topps in its card elements and now you know what an acid trip is like... This is a card of a type which has recently begun to fascinate me. I call them "hero cards." These are cards of players primarily known for a single big accomplishment, most likely in the post season, from the year following their moment in the spotlight. Of course, Chambliss had ended the 1976 ALCS with his anarchy-inducing walkoff homer, making this his hero card. Chambliss falls just about in the middle of the hero card "scale." The better the player, the less points for the hero card. Sure, Bob Gibson's 1968 card is a hero card. But so is his 1965 card, his 1969 card and, really, just about any of his cards. He was a Hall of Famer and World Series master, after all. On the other end of the spectrum, there's Gene Larkin's 1992 cards and Francisco Cabrera's 1993 cards. These represent the epitome of hero cards because those players left little to remember their careers by, other than their one big moment. 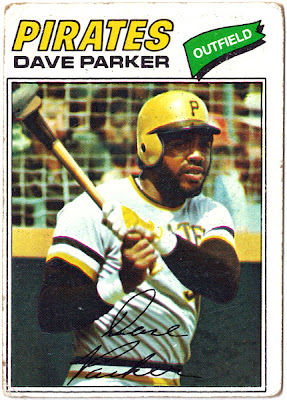 Mmmmmmm... Doughnuts! This is currently the oldest card in this tastiest of mini-collections. And The Cobra seems to be double dipping. 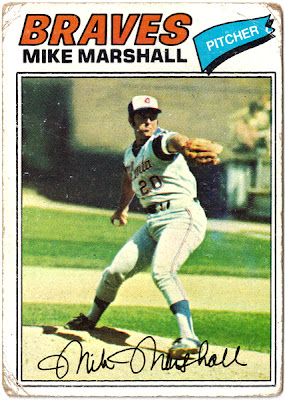 Another ex-Dodger, in the final Topps card of his playing days, despite having four seasons left in his career, including a 90-appearance campaign in 1979 for the Twins. No doubt another cardboard casualty of contract/rights issues. He did receive one of the strangest Random sunset cards around from Fleer in 1982, after his career had ended with the Mets the previous season.

We end with a cartoon (from the back of Larry Parish's card) that would have confused the heck out of me if I'd first seen it as a kid: 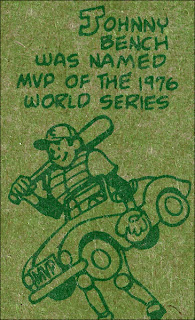 Was Johnny's Bench's nickname "Hotrod," or something? Was he a speedster (he's got wheels, after all)? Did he enjoy dressing up in a strange metal tutu after a hard-fought game? Was he a member of the Transformers?
Posted by petethan at 1:17 PM