The Hall of Ethan: Inaugural Class

The National Baseball Hall of Fame is an exclusive club. But not that exclusive. After all, you can find just about every Tom (Seaver), Dick (Williams) and Harry (Heilmann) within the Hall's halls. If you want exclusive, look no further than (cue the ego) The Hall of Ethan.

I was inspired to explore this bit of narcissism by a post by Gavin (don't call him Garvin) at the excellent Baseball Card Breakdown (back in November... timely as usual around here). The Hall of Gavin, as it turns out, is even more exclusive than the Hall of Ethan. Major League Baseball has seen but one Gavin, Mr. Floyd, now of the Atlanta Braves. So Gavin dug deeper and found some minor leaguers to pad his Hall. Right now, I don't have that kind of ambition or attention span, so for the moment I'll stick with the three Ethans to grace a big-league roster in the nearly 150 years of MLB: 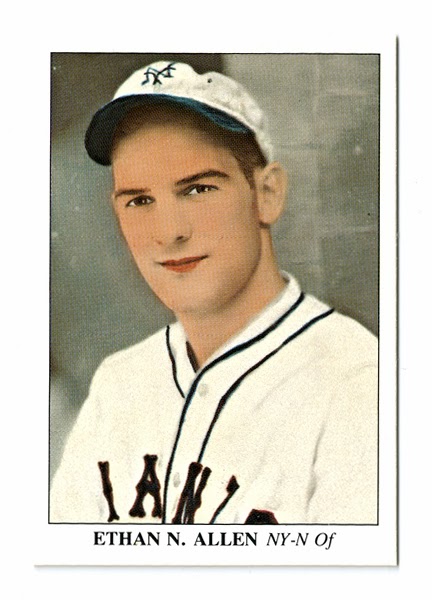 The first big-league Ethan was a bit of a Renaissance man, at least by baseball standards. a .300 career hitter, Allen was a fine ballplayer who had a nice career. After his playing days he became the National League's motion picture director, and then spent 23 years coaching at Yale University. But it is as the inventor of the All-Star Baseball board game that Ethan Allen earns the most bonus points. It was the first popular baseball simulation game that used actual statistics to shape the probability of outcomes. As someone who's spent countless hours enjoying games like Strat-o-Matic, Dynasty League, Diamond Mind, etc., not to mention spending much of a teenage summer making my own such game, this is Ethan Allen's greatest legacy (and that includes that Revolutionary War dude, too!). 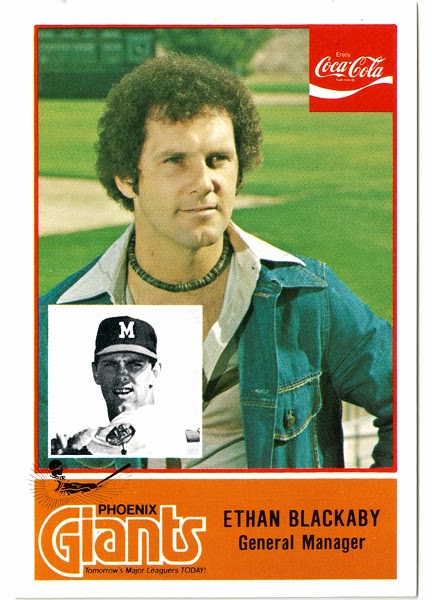 Blackaby's first major league at-bat came in 1962, pinch-hitting for Bob Uecker. He rapped a double off of Ernie Broglio, valuable Cardinals trade chip. It was Blackaby's only big-league hit. Fifteen years later, on the way to whatever was the hottest disco in Phoenix at the time, he posed for this classic minor league card, sponsored by Coke (the drink, not the disco-enabling controlled substance). For this card alone, Blackaby is a worthy member of the Hall of Ethan. 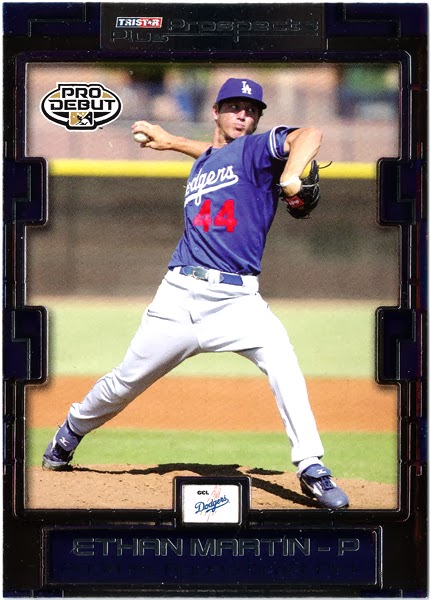 Finally, there's actually an Ethan in the game today! In fact, his card just popped out of a pack of 2014 Topps for me. But he's wearing a Phillies uniform on that one. In fact, Martin never appeared for the Dodgers at the big-league level before being dealt, along with Josh Lindblom, to Philadelphia for two horrendous months of Shane Victorino. But after having two Giants-related cards representing the Hall of Ethan, there was no way I was going to pass up the opportunity to get some Dodger Blue in here for balance.

Roy Halladay apparently felt moved to give Martin one of his own baseball cards to help him take solace in the fact that Doc posted a 10.64-ERA-season early in his career. That gives you some indication of Martin's performance last season. But the story is still being written, so we'll give him the benefit of a doubt. Besides, he's already done all he had to do to make the Hall of Ethan (with a lot of the credit going to his parents).

I'll probably see if I can make a baseball card dent in the minor-league Ethan population at some point. There are currently ten bold-faced (active) Ethans on the farm according to Baseball Reference. Feel free to drop one on me if the opportunity and inclination strikes.

I'm just glad that this guy didn't play in the bigs and become a star when I was in grade school! Times were different back then...
Posted by petethan at 6:11 PM

Email ThisBlogThis!Share to TwitterShare to FacebookShare to Pinterest
Labels: Hall of Ethan