Playing With My Dodgers: Wes Covington

Wes Covington made a name for himself with the Milwaukee Braves. Used sparingly as a second-year player in the first half of the 1957 season, he would come on strong in the second half, finishing the year with 21 homers and 65 RBI in just 96 games. Covington followed that up by starring with both the glove and the bat in Milwaukee's seven-game World Series victory over the Yankees.

The powerful left-handed batter did not reach Los Angeles until the final stop of his big-league career, joining the club two months into the 1966 season after being released by the Cubs. Unfortunately, he did not perform particularly well (.121, 1 HR, 6 RBI, almost entirely as a pinch hitter). He was one of the eleven strikeout victims of Moe Drabowsky in the first game of that year's World Series. It was to be the final at bat of Covington's major-league career.

He did have one signature moment in Dodger Blue, however. On August 14, at Dodger Stadium, against the team that had released him just a few months earlier, he came to the plate with two outs in the bottom of the fourteenth inning, with the bases loaded and the Dodgers training the Cubs, 3-2. Covington knocked a single into center against Calvin Koonce for a walk-off 4-3 Dodgers win. 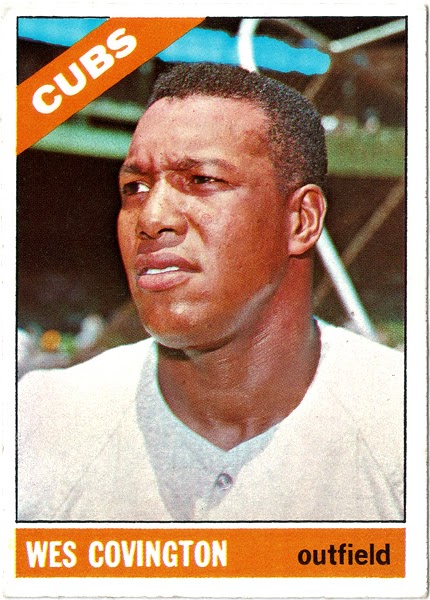 This is the third of five cards for the PWMD set sent by Harry/Mark. This card, along with the two still to come, was on the short list of needs that I sent to Mark when he contacted me about trade possibilities. I hadn't really expected that he'd have any of them available, let alone three! Covington isn't pictured with the Dodgers, but I'm not sure a card exists with him in that uniform (his 1990 Target All-Time Dodgers card shows him with another team). This card works perfectly, however, given that he's not wearing a cap, and that the card is from the year he played with the Dodgers. If you get the impression from the picture that the card is in good shape, you're right. It's friggin' beautiful! I am positive that this is the best-looking card of this vintage in my collection. Thanks again, Harry. You really hit the Mark again!
Posted by petethan at 1:00 PM