Playing With My Dodgers: Nick Willhite

Nick Willhite is a baseball success story, though not so much for what he accomplished on the diamond. Pitching entirely during baseball's second deadball era in the '60s, the southpaw managed no better than a 4.55 ERA in 58 big-league games, exactly half of them starts. The recipient of a hefty $50,000 signing bonus out of high school, Willhite fell far short of expectations. By his own admission, much of that has to do with his struggles with alcohol.

Things got worse for Willhite before they got better. Just as he struggled to find success as a player, he would also have difficulty holding down coaching jobs, finally finding himself homeless and contemplating suicide. Fortunately, he got in touch with fellow Dodger alum Stan Williams, who brought his plight to the attention of the BAT (Baseball Assistance Team) Program. BAT is funded primarily through donations by active players, and helps former players and other baseball people who have fallen on hard times. They helped Willhite get into a rehab program that would save his life, and give him back to his family. The Dodger family stepped in to help as well. Peter O'Malley would pay to get back the 1963 World Series ring that Willhite had hocked to feed his addiction. 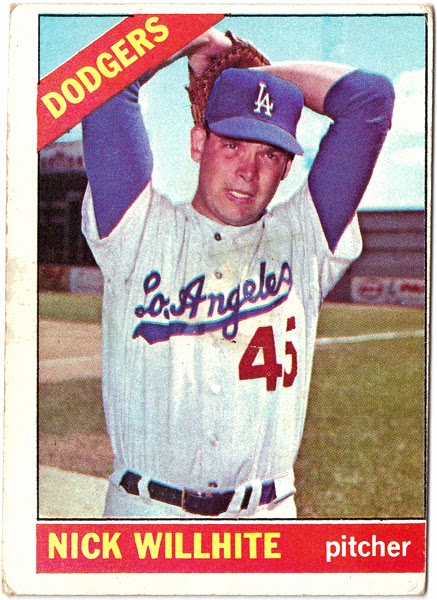 This is the second of five PWMD inductees sent my way by the generous New Englander, Harry/Mark. As it's Willhite's only major issue solo card in a Dodger uniform, this was the obvious choice. It was just a matter of landing a copy... and here it is. Thanks again, Mark!
Posted by petethan at 12:08 PM