Playing With My Dodgers: Don LeJohn

Three months spent in Los Angeles in 1965 represents the totality of Don LeJohn's big-league career. Yet the man was a Dodger almost exclusively for thirty-three years.

That career began in 1954 with the Shawnee Hawks of the Class D Sooner State League. Twelve years later, LeJohn would make his Major League debut, starting at third base for the Dodgers in the second game of a double header at Wrigley Field on June 30, 1965. Batting eighth, he came to the plate for his first at bat with runners at the corners and two outs in the top of the second inning. LeJohn came through with a hit off of Bob Buhl to drive in Lou Johnson. He would later single and score the go-ahead run in a 4-3 Dodgers win. A strikeout in his only plate appearance in the 1965 World Series would end the big-league portion of Don LeJohn's career.

Don "Ducky" LeJohn may have had a brief moment in the big-league spotlight, but for more than three decades he was the kind of baseball lifer who contributes to the solid foundation of a successful major-league franchise. 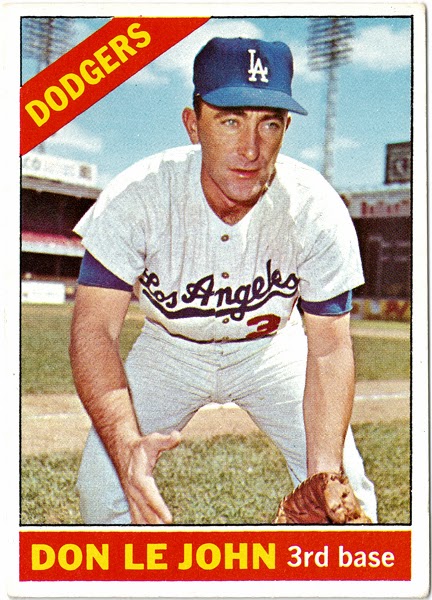 Naturally, this is the only big-league card of LeJohn's career. It's also the first of four more PWMD inductees sent by the "Vintage Virtuoso," Mark "Harry" Hoyle. And it's a beaut. Ducky stands poised to field any grounders that may come his way in the foul territory along the fist base line at Connie Mack Stadium in Philadelphia. The last major league game to be played there took place before my first birthday. But Mr. Hoyle's baseball time machine continues to take me to places that I only wish I could have experienced first hand. Thanks, Mark!
Posted by petethan at 11:06 AM