Playing With My Dodgers: Preacher Roe

One of my prized possessions is my Grandfather's old copy of Roger Kahn's The Boys of Summer. It might be a first edition. I have no idea. But it's properly worn out from the readings it's provided for Grandpa and me over the years. The players who appear in Kahn's masterpiece became more like mythical characters than regular ol' ballplayers to me growing up. Those Brooklyn Dodger teams are better known for their offense. Robinson, Reese, Snider, Campanella, Hodges, Furillo... these are the names that come most readily to mind. But, as with any perennial contender, the Dodgers of this era enjoyed the backbone of an excellent pitching staff. And if Preacher Roe's name isn't as widely remembered today, it's neither for a lack of talent nor personality.

A flamethrower in his youth, injuries had turned Roe into the proverbial crafty lefty by the time Branch Rickey brought him to Brooklyn in 1948. In fact, the extent of his craftiness was well-known around the league, and was revealed by Ol' Preach himself shortly after his retirement. Motivated to encourage Major League Baseball to once again legalize the spitball (and/or by the $2,000 that he was paid by Sports Illustrated to make the confession), Roe admitted to including the banned pitch in his repertoire throughout much of his career. The son of a doctor, a college man himself, and a high school math teacher in the offseason, the Arkansas native played to the media by affecting the stereotypical drawl and mannerisms of a hillbilly bumpkin. But the bottom line is that the man could pitch. Roy Campanella considered Roe the best pitcher he ever caught. "He was a guy who knew what he was doing every second of every minute," said Campy.

Perhaps Preacher Roe's finest moment in baseball came in the 1949 World Series. Brooklyn had dropped a heartbreaker in the opening game at Yankee Stadium, with Allie Reynolds outlasting Don Newcombe for a 1-0 victory, courtesy of a walk-off homer by Tommy Henrich. Preach got the call for game two, facing Vic Raschi. Jackie Robinson doubled to lead off the second inning, and was driven in with two outs by Gil Hodges to give Brooklyn a 1-0 lead. In the fourth, the Yanks' Johnny Lindell ripped a shot back through the box that tore half a nail off of Preacher's glove-hand ring finger. There was so much swelling that the Dodgers' trainer had to drill a hole in the nail to relieve the pressure and allow Roe to stay in the game with what turned out to be a broken digit. Ol' Preach hung tough and shut out the Bombers for a six-hit, 1-0 victory to even the series. 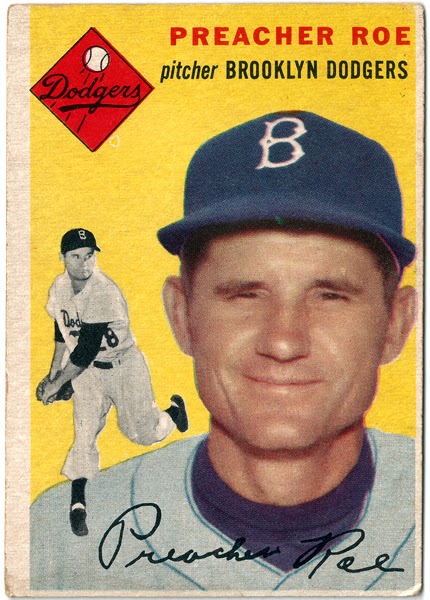 This is yet another vintage gem chosen by my proxy shopper, Nick, for the First Dime Box Card Show. You can see the confidence, intelligence, and country charm on the face of Ol' Preach. You can picture him whittling away at a piece of wood, straw dangling from his lips, as he languorously takes in the day from a rocking chair on his porch. Or you can just as easily envision the man as a wise country doctor, keeping a frazzled farmer calm while delivering his wife's baby in a barn. Being a city guy, myself, Preach might as well be a mythical character. This is a fantastic piece of cardboard that further brings to life for me one of The Boys of Summer. Thanks for exercising your considerable card show powers to bring this great card home to its rightful place in the PWMD set, Nick.
Posted by petethan at 11:32 AM