Playing With My Dodgers: Jack Banta

Jack Banta was a lanky righthander with a sidearm crossfire motion. Following a couple of trials with the Dodgers in 1947 and '48, seasons in which he spent most of his time dominating International League batters in Montreal, Banta stuck with Brooklyn in 1949. After toiling effectively out of the bullpen for the majority of the season, Banta was inserted into the starting rotation in mid-August, going 4-1 with a 3.10 ERA over the course of eight late-season starts to help Brooklyn stay close to the St. Louis Cardinals in a tight race for the National League pennant.

Going into the final day of the 1949 season, on October 2, Brooklyn stood atop the NL standings by a single game over the Cardinals. With the Cards at Wrigley Field, en route to a 13-5 shellacking of the Cubs, the Dodgers needed to beat the Phillies at Shibe Park to avoid another playoff with St. Louis for a trip to the World Series. It looked good when Brooklyn batted around in the third inning, taking a 5-0 lead behind their ace, Don Newcombe. But the Cards would battle back, and by the time Jack Banta was summoned from the bullpen to replace reliever Rex Barney, the tying run stood at second base for St. Louis with two outs in the sixth inning of a 7-6 game.

Banta surrendered a base hit to Del Ennis that would plate Granny Hamner with the tying run. But he would strike out Andy Seminick to end the inning and the rally. Banta would then settle in to toss three scoreless, hitless frames, keeping the contest knotted at seven through nine innings. In the top of the tenth, Pee Wee Reese singled and was bunted over to second, where Duke Snider would drive in the captain with the go-ahead run. An insurance run gave Brooklyn a 9-7 lead for Banta to protect... which he did, retiring Richie Ashburn to end the game and send the Dodgers to their third Fall Classic matchup with the Yankees.

Banta pitched well in three relief appearances against the Bronx Bombers in a losing cause for Brooklyn, and hopes were high for the Kansas native going into the 1950 season. But arm troubles would crop up in spring training. The state of sports medicine being what it was at the time, the Dodgers pumped Banta's arm full of morphine and kept sending him out there. Eventually, they decided that having his wisdom teeth removed might cure the pain in his shoulder. Not surprisingly, that didn't work and, at just 25 years of age, Banta's promising major-league career was over. 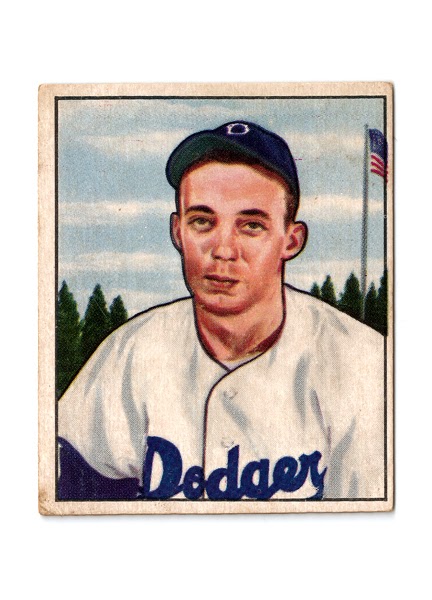 This first Brooklyn Dodger to be inducted into the PWMD set comes courtesy of the Vintage Virtuoso, Mark "Harry" Hoyle. The man really outdid himself this time. What can I say? It's simply incredible to consider how much enjoyment Mark has provided me in such a short time. With this beautiful little piece of cardboard, Mark has matched the oldest card in my collection, Hoot Evers, from this same 1950 Bowman set. Words are not enough, sometimes, even though that's all a blog has got. Thank you, Mark. Sincerely.
Posted by petethan at 11:04 AM