I May Not Have Been an Oscar Winner... But I Sure Got One Heck of a Booby Prize!

With the Dodgers and Yanks even at a game apiece, Sal Maglie took the mound for Brooklyn in the pivotal game five of the 1956 World Series. The winner of the series opener, "The Barber" was on his game, tossing eight innings and allowing just two runs on five hits to the Bronx Bombers. 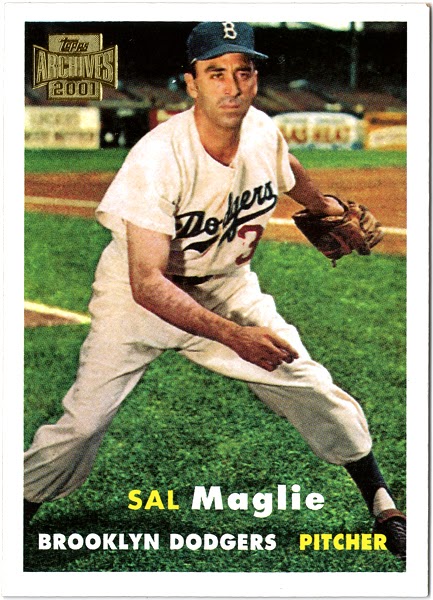 But there was to be no victory for Maglie in this game, or for the Dodgers in this series. Sal's game five start came against Don Larsen, pitching the game of his (and just about every other pitcher's) life. Brooklyn would fall to the Yankees (again) in seven games.

It probably comes as cold consolation (perhaps it's lukewarm), but the World Series losers do still get a nice cash bonus for coming up a buck short on the field. Well, I got to experience something similar recently, only in my case the consolation prize was white hot. It took me well past consolation, past contentment, and all the way to Dodger Blue bliss! 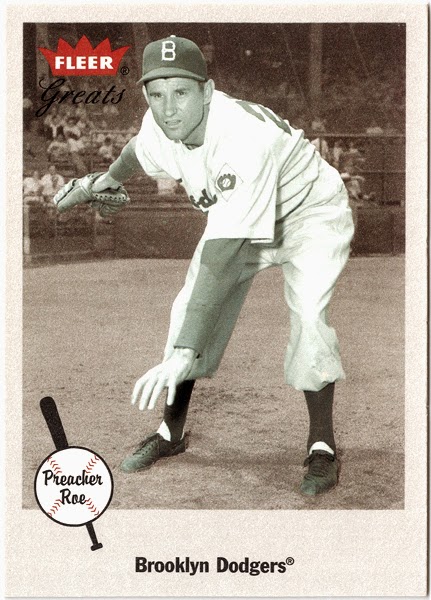 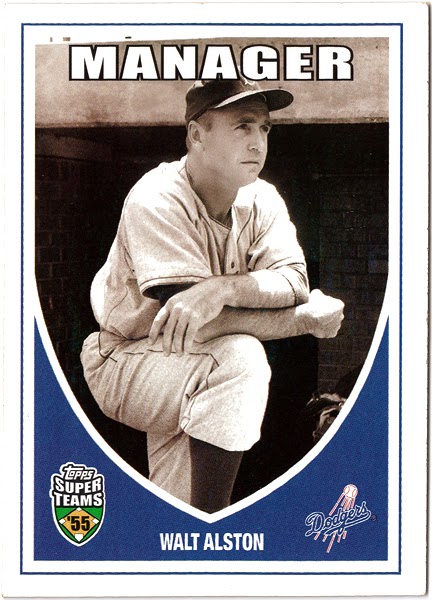 And who better to serve up Blue bliss than a fellow Dodger fan? Oscar, of All Trade Bait, All the Time, he of the Grand Salami of Trade Bait, recently returned to his blog from a brief hiatus and celebrated by holding a simple contest. A comment on his post would get you into two randomized drawings for a stack o' cards from your favorite team. Now that's my kind of effort level! 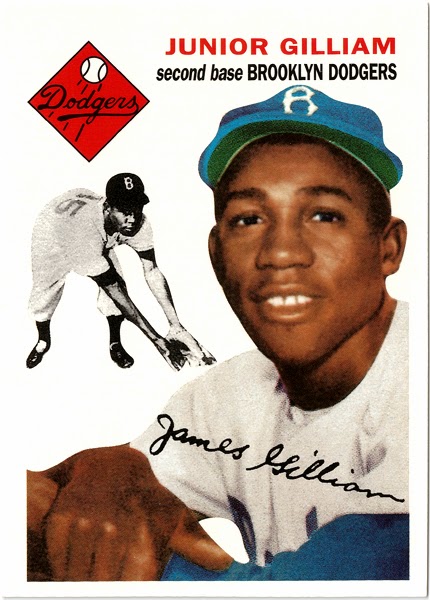 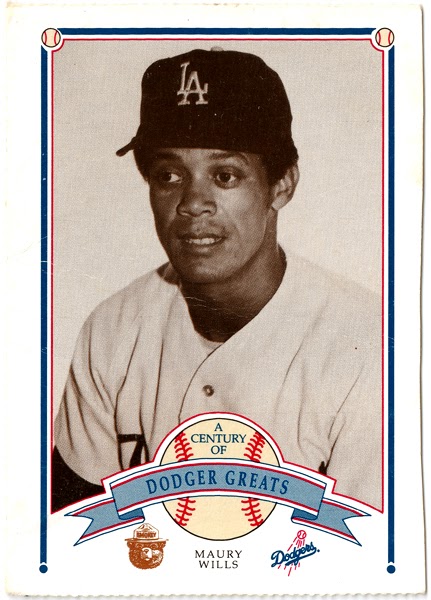 A couple of days later the results were in. It was time to see how far down the lists my name would pop up. There are a lot of deserving card bloggers out there, and one of them not named Ethan invariably ends up on top. And this time it was no different. Well, it was a little different. This time I finished second. Both times! 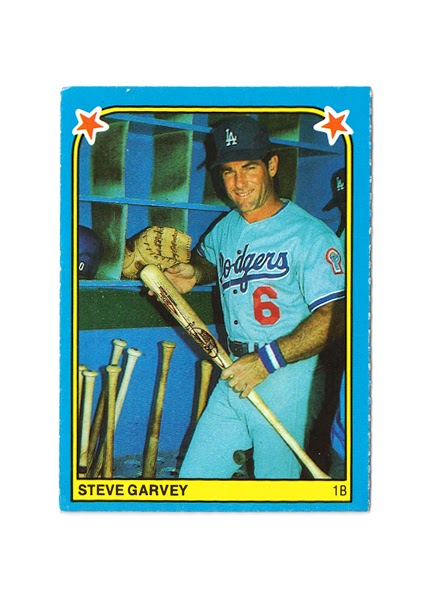 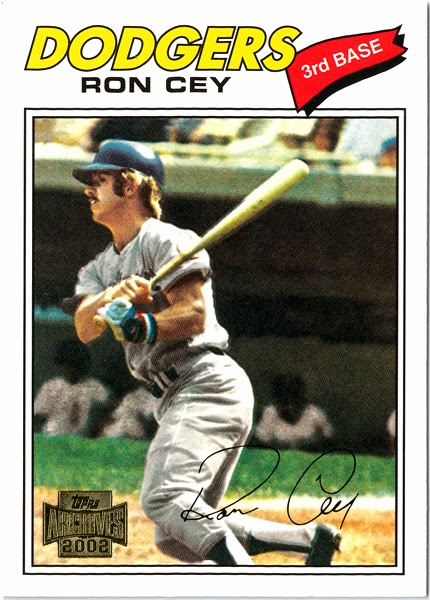 It was an interesting way to lose, at least. I commented: "What's the booby prize for finishing second both times? Sheesh! (Just Kidding.) Thanks for the contest." Oscar replied: "Ask the Broncos. LoL. Tough break, kid." (That's a football reference, right?) So, cute story. End of story. Right? 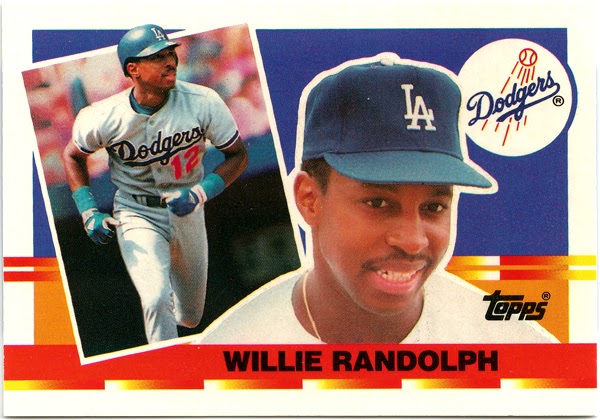 Wrong. (You'd probably figured that out by now.) A few days later I check my email inbox and see this message from Oscar: "What a burn to finish second ...TWICE !! I feel ya on that one. Since we're fellow Dodger fans, I can certainly help out a second place winner. Shoot me your address and I'll get some Dodgers out to you." 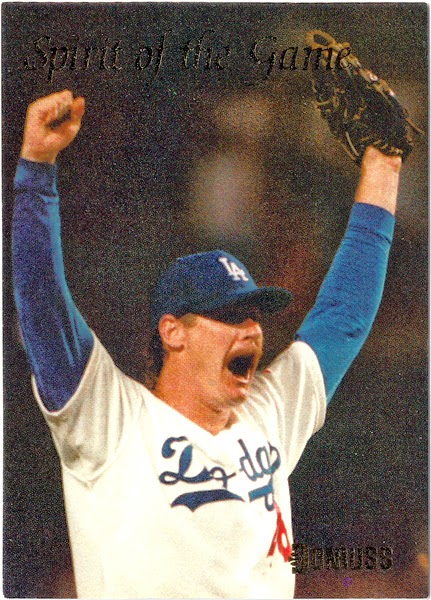 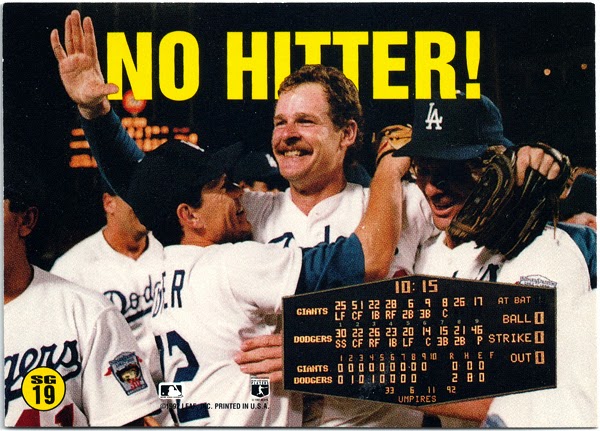 That was certainly nice of him! Cool, a Dodger booby prize. I'd probably get a few base set commons that Oscar had lying around. Or maybe one nice card, like, I don't know, Aaron Harang displaying a grip for my mini-collection, or something. Right? 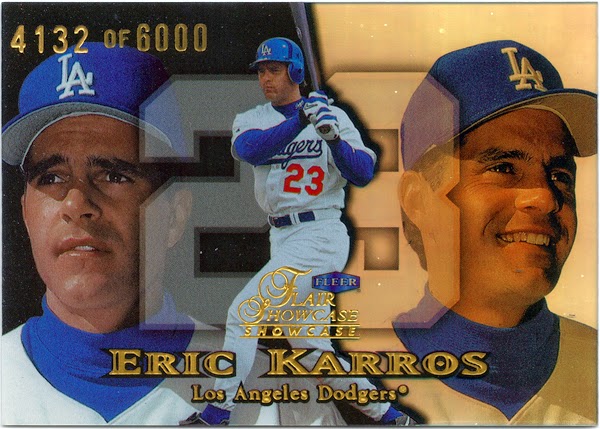 Wrong. (I know you're too smart to fall for the suspense gag, while I'm showing you the cards... but, hey, let's face it, unless you're Oscar, and maybe even if you are, you're just looking at the pretty pictures of great cards, anyway.) 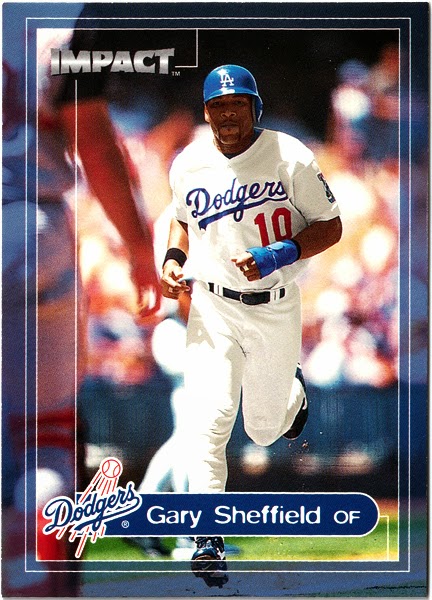 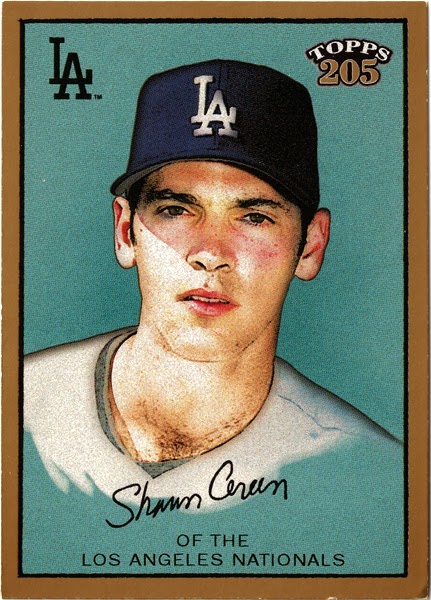 And they are great cards. Yes, this is my booby prize. Correction: it's a minority portion of my booby prize. And it's not just a bunch of commons. It's stars, oddballs, serial numbered cards, relic cards, inserts... you name it! All Blue, and all beautiful! 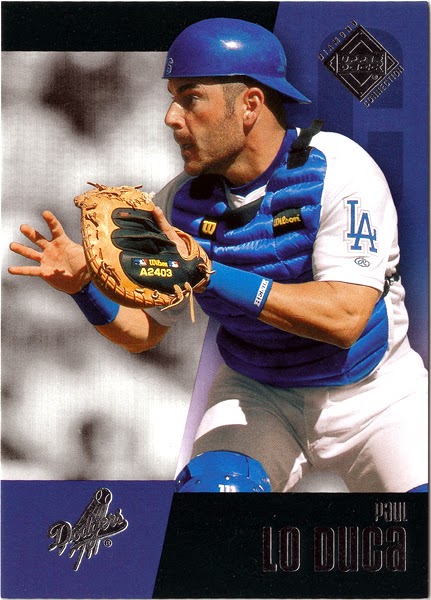 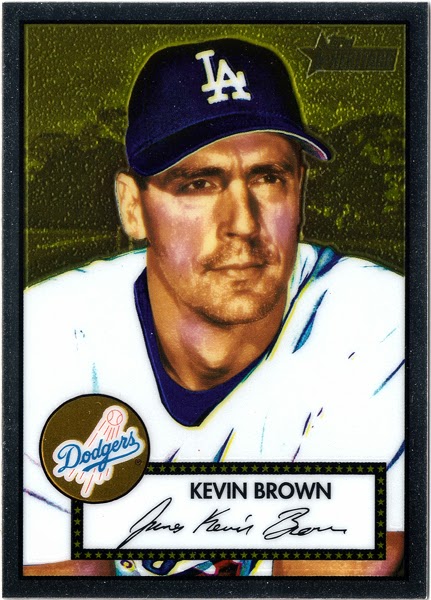 And all right in the wheelhouse of my collection void from about 1997-2007 (except Topps base sets). Repeating that often has paid off. But rarely, if ever, has the payoff been this friggin' fabulous. All for finishing second twice. As Vin would say, "Deuces Wild!" 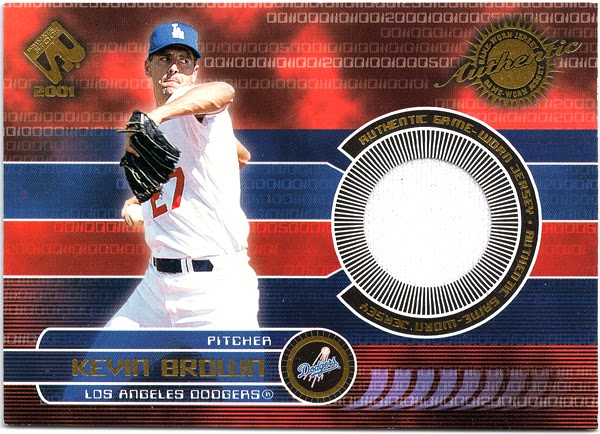 I don't know how he did it, but Oscar seemed to know exactly what i needed and exactly what I wanted. Hell, I don't even have that kind of grip on my own collection. Dude must be psychic or something! 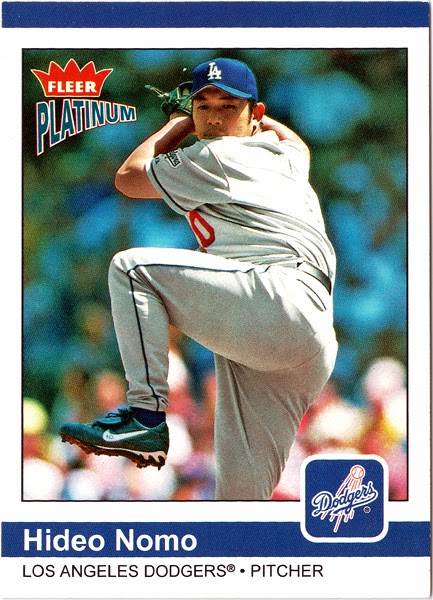 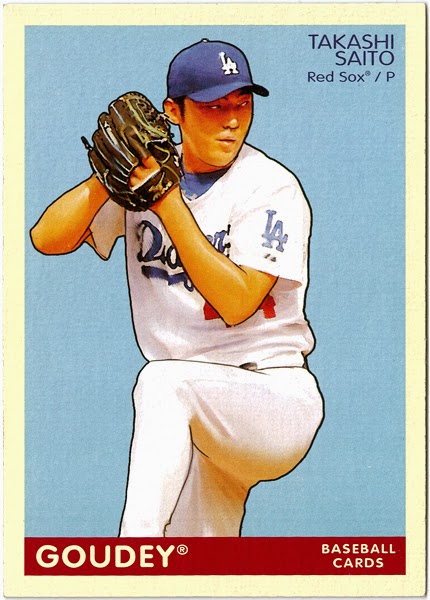 For example, look at that Nomo! There are a lot of great cards of Hideo out there, and I have a fair number of them. But I'd never seen this one, and I love it! The play of the sunlight, Nomo's motion caught as he's poised at its pinnacle, before The Tornado whips his way forward, with the Platinum logo seeming to twist with the twister... awesome. 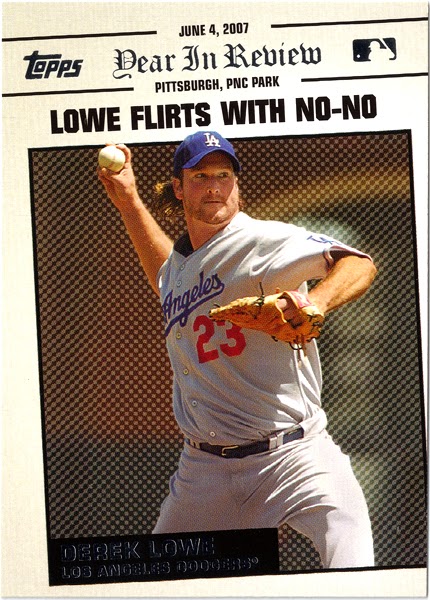 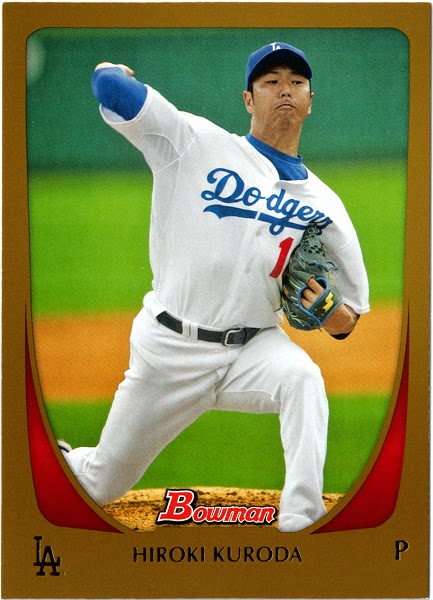 Oscar knew that I not only enjoy Dodgers, I particularly enjoy pitchers. How sweet is that gold Kuroda? (And are you now stuck on "My Sharona" like I am? G-G-G-Gold Kuroda!) 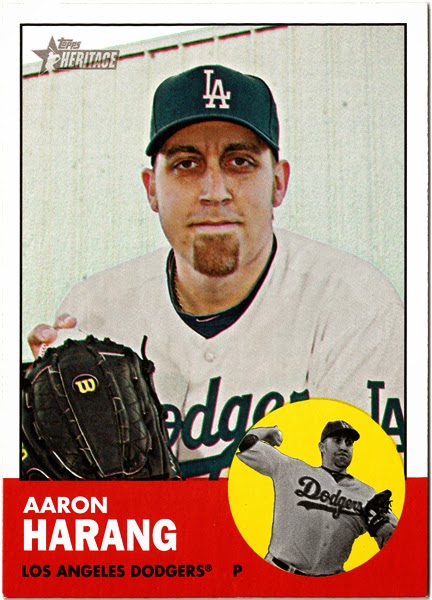 Hey, Oscar did send Aaron Harang displaying a Grip for my mini-collection! Whaddaya know!? Looks like Harang was trying to hide it, but to no avail. 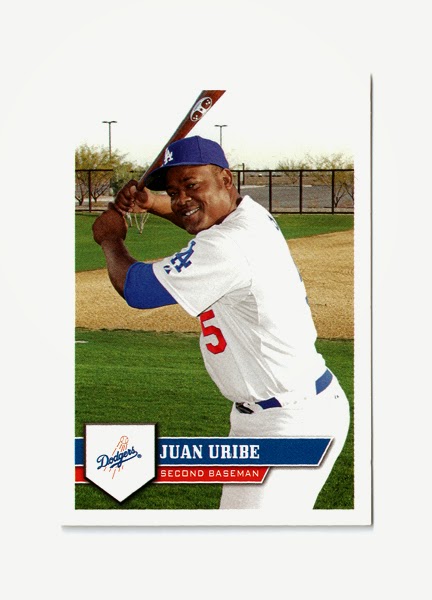 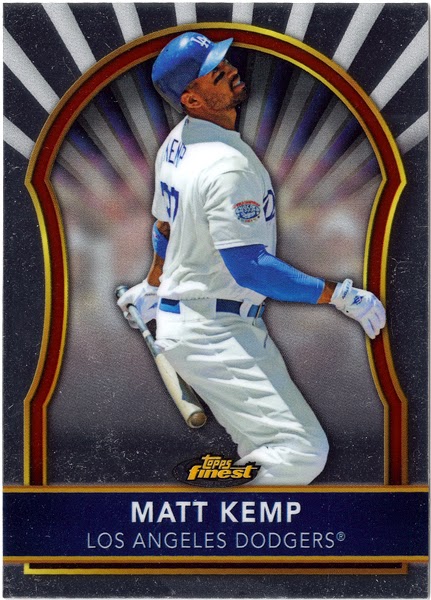 I chose today to display Oscar's generosity because it's a big day for us Dodger fans. We get to see our team win its third game of the season before anyone else manages to win a single contest! In fact, I hit the "publish" button the moment of the first pitch. I'll let Oscar chime in: 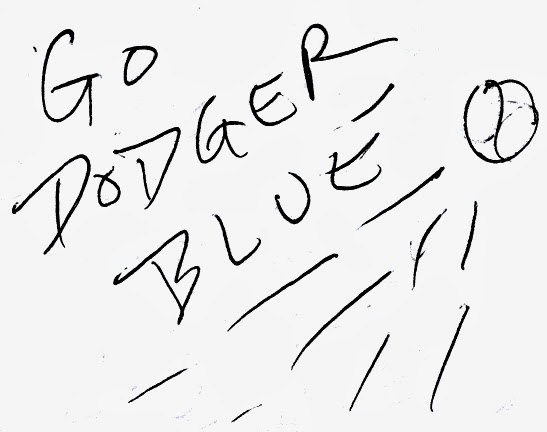 Go Dodger Blue, indeed. Happy 2014 everyone! The year really starts now. And thank you so much for the booby prize, Oscar! (Yes, I do just like to type the word "booby.") I may not have been an Oscar winner, but Oscar sure made me feel like one.
Posted by petethan at 5:13 PM