Playing With My Dodgers: George Hildebrand

What a great story. If you're interested, I've posted the back of this card for you to read the details. Long story short: George Hildebrand was a minor-league outfielder at the turn of the Twentieth Century, playing mostly in the old Pacific Coast League, who invented the spitball. Then he became an American League umpire, serving in that capacity for 22 years, from 1913 to 1934. The pitch that he'd invented was outlawed by Major League Baseball in 1920, meaning that it was his job to make sure pitchers didn't illegally employ "his" pitch!

Oh yeah, and his entire major-league career consisted of eleven games for Brooklyn in 1902. 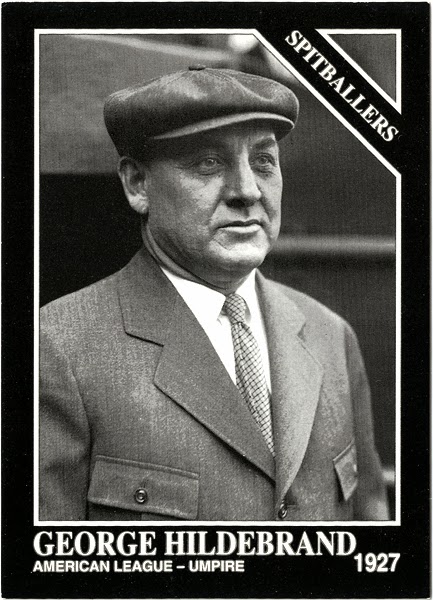 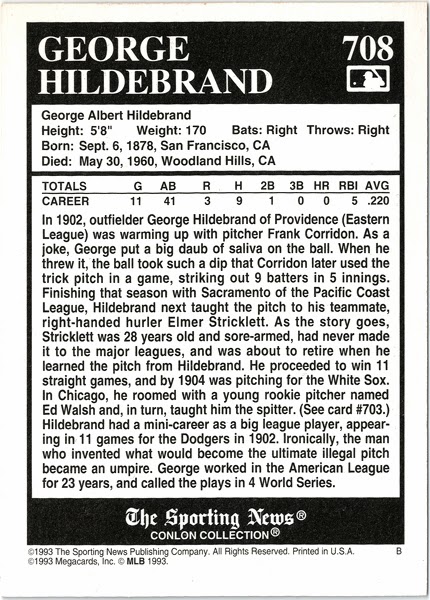 Here is another excellent example of the power of Random. This is one of the many excellent cards chosen by Dime Box Nick, as my card show proxy shopper. I don't know what Nick knew about George Hildebrand, if anything, when he grabbed this card for me. You would have to read to the end of the text on the back of the card to determine that Hildebrand had anything to do with the Dodgers. It's my guess that Nick simply saw a nice Conlon card, with the truly Random element of an umpire labeled as a "spitballer," and figured that alone would make this a card destined for my playground. If so, he would have been entirely correct, at that. But the fact that it depicts a Dodger (Superba, actually) who played in just eleven big-league games, all back in 1902, naturally vaults the thing into PWMD perfection. Thanks again, Nick, for your uncanny ability to channel the power of Random.
Posted by petethan at 1:36 PM