Playing With My Dodgers: John Purdin

It couldn't really be as easy at it probably seemed. And, eventually, it wasn't. But the first taste of big-league action for 21-year-old John Purdin in 1964 had to be pretty heady stuff for the Ohio native.

The first batter he faced, coming out of the bullpen in the sixth inning on September 16, with the Dodgers trailing Pittsburgh by five, was Bill Mazeroski. He retired the future Hall-of-Famer on a grounder to third, and worked a scoreless inning. In the seventh, he retired Roberto Clemente, Willie Stargell and Donn Clendenon in order. Not a bad debut.

But it would get even better. Purdin got the start his next time out, facing Larry Jackson and the Cubs at Dodger Stadium on September 30. Cubs catcher Dick Bertell singled in the third and fifth innings. Those would be the only two hits allowed by Purdin in a 2-0 complete-game victory. Purdin would get one more chance, starting the final game of the year for the Dodgers, at home against Houston on October 4. He would finally surrender a run on a fourth-inning leadoff homer by Jimmy Wynn. But he picked up the win with five solid innings in an 11-1 rout.

Purdin was never going to be able to sustain that kind of success. And he didn't. Another brief trial in 1965 wasn't pretty. He spent all of '66 and '67 in the minors, was effective out of the Dodger bullpen in '68, and then not so much in '69. And that was it for his major-league career. 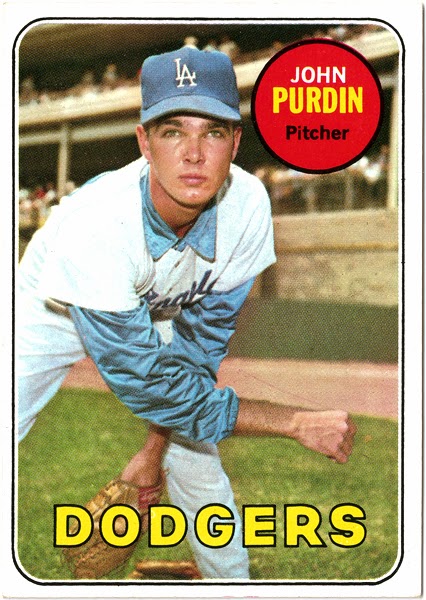 The Vintage Virtuoso, Mark "Harry" Hoyle comes through again, continuing to stake his claim as the biggest, baddest contributor to the PWMD collection. In this case, perseverance paid off, as Mark had sent me Purdin's only other solo Topps card in the very first package that he sent my way. Way to employ the process of elimination, Mark! Thanks again for being the Santa Clause of baseball cards. I have no idea how I managed to get on the "good" list, but I'm sure glad to be here.
Posted by petethan at 3:44 PM