Playing With My Dodgers: Bruce Brubaker

Do you live in Kentucky? Are you on the market for a new or pre-owned car, truck or van? If so, discover “The Champion Experience” with a visit to Champion Ford Lincoln Mazda on Southtown Boulevard in Owensboro, KY. And while you're there, say hello to Bruce Brubaker, owner of one of the premier dealerships in western Kentucky, as well as the experience of pitching in a big-league game for the Dodgers.

That's right, "a" big-league game, as in one. Actually, I'm shorting him. That's one game as a Dodger. He also pitched in one game for the Milwaukee Brewers, bringing his lifetime total up to two appearances. Let's give the man his due. He was a 117-game winner in the minors from 1959, when he was 17 years old, through his retirement in 1972.

That one appearance for the Dodgers? It came on April 15, 1967, in St. Louis. Don Sutton didn't have it that day. By the time Brubaker was summoned from the bullpen by Walt Alston to make his major-league debut, the Dodgers trailed the Cardinals 10-3. With a runner on first and two outs in the bottom of the seventh, Brubaker struck out the first big-leaguer he faced, Phil Gagliano, to end the inning. The eighth inning would not go so smoothly. It started with a Julian Javier double, followed by a single by Dal Maxvill. One out later, Brubaker's career ERA would never look pretty again, as he was touched for a three-run homer by future Hall-of-Famer Lou Brock. 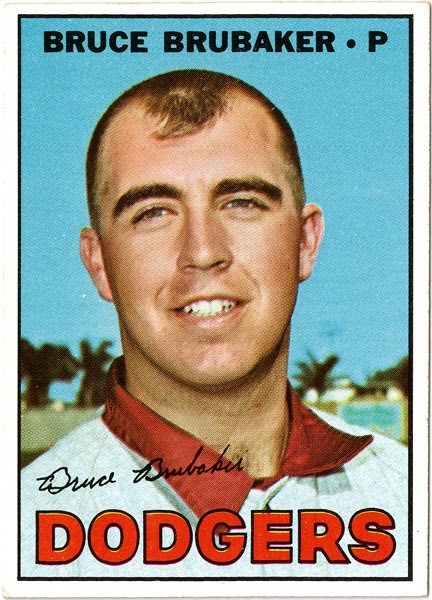 Why does this card exist? That's a reasonable question when you consider that Brubaker hadn't arrived in the majors yet. The Dodgers made him a Rule 5 draft pick out of the Philadelphia organization (hence, the maroon windbreaker peaking out from beneath his uniform), so he was hardly a heralded prospect. And yet, here it is. And it's a beautiful thing. You know you want to buy a car from this guy...

This card arrived on its own in a PWE from the Vintage Virtuoso, Mark "Harry" Hoyle. I seems like Mark has been on a mission to locate the most obscure player eligible for the PWMD set, and with Brubaker he may have reached the pinnacle (or nadir) of that goal. Looks like you need a new goal, Mark. Time to head in the opposite direction? Koufax hasn't been inducted yet, you know... I kid. But there's no kidding when I say that I continue to be astounded by, and appreciative of, the surprises Mark has in store for my collection and this humble blog.
Posted by petethan at 11:26 AM