I've learned a lot about how to enjoy Playing With My Cards in just a few short months of blogging. I knew I liked Topps cards. I knew I liked my Dodgers. But it has only been recently that I've started to understand that the things that excite me the most as a collector are Random in nature. I'm capitalizing Random because that's the new paradigm around these parts. Just as I'm becoming less rigid in my ideas about collecting, I'm becoming less serious and regimented in my ideas about blogging. I'd set myself up to churn out preconceived posts, whether they were interesting or not. No more. From now on, if something's on this screen, under the heading of Playing With My Cards, it's going to be because it's friggin' fun, damn it!

I have to give a serious nod of thanks to Nick, of Dime Boxes, for helping to open my eyes to a different way to have fun collecting baseball cards. And I have to apologize to him, too. Because, though I had no intention of doing so, I just can't help but blatantly rip off his collecting habit of amassing mini-collections. When I was recently digging through a box '94 Collector's Choice that I got from a guy on Craigslist, which included a bunch of duplicates, the most fun I had was trying to spot cards that I could send to him for his collections: pitchers hitting, guys being interviewed, arguments with umpires, etc.

This wasn't a way that I'd collected myself, though. I've always been completist and a Dodgers collector. But, since starting this blog, I've come to realize that I gravitate toward certain types of cards. And I don't mean certain teams, players or sets. I mean cards that share specific characteristics. So, why fight it? On top of everything else, I've become a mini-collector.

I have a couple that I've started, which I'll be yapping about in the coming days. The first one, fittingly, came about Randomly in the course of my first month with this blog. In one of the few truly Random posts here, I couldn't help but share my inexplicable fascination with Joe Carter's fabulous turtleneck on his 1998 Donruss card. Later, I pulled a card out of a repack of minor leaguer Amalio Carreno sporting a pink turtleneck under his maroon jersey. Random.

But this was the card that sealed the deal: 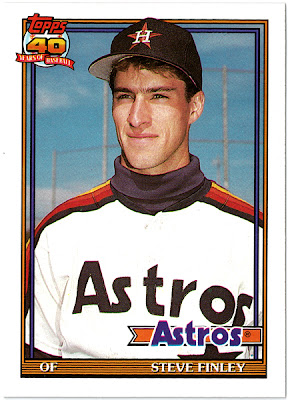 When I saw this pop out of a pack on a Card Night, I just knew that, without trying, I had found myself with a mini-collection on my hands. I collect cards of baseball players wearing turtleneck sweaters. If that isn't Random, I don't know what is...
Posted by petethan at 11:11 PM