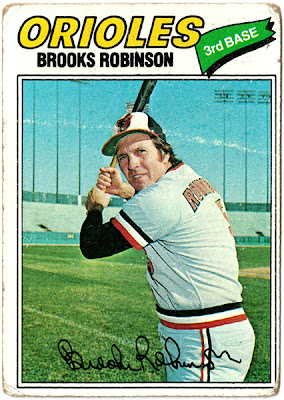 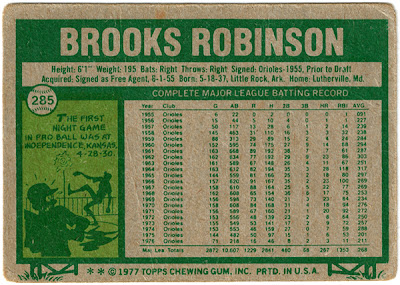 I've given up trying to keep track of which is the coolest card from the Night Owl's gift, since great cards just keep coming out of those boxes every time I dip my greedy little hands in to grab a stack. But if I were still keeping track, there's a pretty solid chance that this Robinson card would be putting up a fight for the top spot. It's easy to look at the numbers he recorded in the last couple of years before this card came out (not to mention the even worse numbers he put up before calling it a career in '77) and say that he should have retired sooner. Maybe so. But from a cardboard perspective, I'm sure glad he didn't. 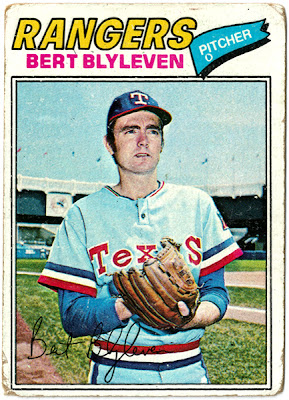 I'm going to be expressing a contrary opinion when next we look at some Night Owl cards (get ready for a rant). But today's Blyleven-inspired opinion stays in the realm of keepin' it positive. I'm happy that Bert Blyleven is in the Hall of Fame. His was definitely a borderline case, particularly given that he was never considered one of the league's truly elite pitchers during his long career. However, only Nolan Ryan, Randy Johnson, Roger Clemens and Steve Carlton struck out more batters in major league history. Blyleven fanned more hitters than Tom Seaver, Walter Johnson, Greg Maddux, Pedro Martinez or Bob Gibson, just to name a few. So, his plaque isn't hard too hard to justify. From a card-collecting standpoint, however, it's truly excellent. Anyone who's been collecting for a long time, like I have (being old, and all), can probably testify to the difference his induction has made in terms of the impression his cards make. Pre-Cooperstown, getting a Blyleven card felt like getting a card of Jerry Koosman, or Micky Lolich, or Jim Kaat, or Vida Blue. Nice. But post-Cooperstown, a Blyleven hit feels a little more like getting some of the guys I mentioned when discussing strikeouts. Even better. 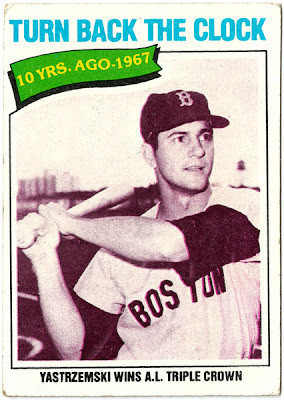 What an awesome card to close out this "pack." I haven't talked a whole lot about Yaz here. But if you've been following things over at Top of the Topps, you know that he was my very first "favorite player." And speaking of Top of the Topps, the timing of this Yaz card couldn't be any better, as the discussion over there currently includes the next opportunity Topps took to turn the clock back to '67, this time from a distance of 20 years. Thanks for the tie-in, Night Owl. You're always thinking ahead, aren't you? That deserves a cartoon... 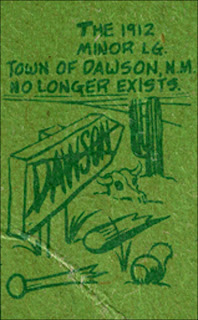 This one, from Ron Pruitt's card struck me as particularly funny and interesting. Having lived in Albuquerque, and having had occasion to drive through different parts of New Mexico, I can't say it surprises me to find that there's something lost out there with all of the sand and tumbleweeds.
Posted by petethan at 10:58 AM