Playing With My Dodgers: Mike Blowers

Well, in this case I'm really playing with someone else's Mariner, who was loaned to the Dodgers for a season. He went to high school and college in Washington, and was originally drafted by Seattle. He didn't sign with them, but the Mariners would eventually get their man in a trade with the Yankees in 1991. Blowers had his finest big-league season with Seattle in 1995, at the age of 30, with 23 homers and 96 RBI.

It was at the end of the '95 season when the Dodgers acquired Blowers for Miguel Cairo. I had forgotten that Cairo, who just retired at the end of last season, was originally in the Dodgers' organization. What did the Dodgers get in return for a versatile 17-year veteran and team leader? Three inconsistent months of yet another stop-gap "solution" at third base, before a knee injury ended his '96 season in July and he became a free agent at year's end.

He would sign on for his second of three stints as a Mariner, but would never again approach his high-water mark of '95. He's still with the Mariners, though, as a color commentator. In fact, Blowers is probably best known for a couple odd events that took place in the booth. First, he accidentally initiated an off-and-on tradition of bestowing Rally Fries upon lucky Mariners fans. More impressively (at least from a monkey-smashing-a-keyboard-type perspective), he predicted, with uncanny accuracy, the (nearly) exact circumstances of Matt Tuiasosopo's first major league home run. 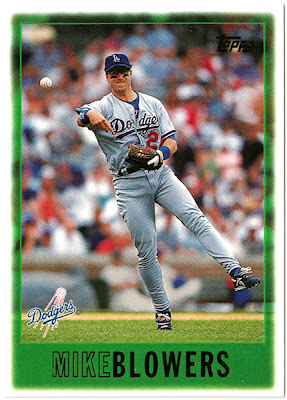 Blowers was a big enough deal to merit a spot in the severely truncated 1997 Topps set, getting this minor gem of a card to commemorate his few short months on the field for the Dodgers. With its preponderance of cool green, and the action frozen in front of a colorfully blurry sea of fans, it's a perdy card, deserving of its spot in the PWMD Set.
Posted by petethan at 7:14 PM