In the Nick of Time

In the past few months I've done a little trading, sent out a few PWEs, knocked out some want list needs, and of course was the fortunate winner of the Night Owl's well-loved '76-'77s. But I had never enjoyed anything quite like the trade package I received from Nick of Dime Boxes this week. And it came at a perfect time.

Anyone who's been inexplicably paying attention to my ramblings here knows that I'm at a bit of an early crossroads with this blog. It's a good thing. I'm doing whatever it takes to make sure I don't get into the kind of rut that makes this a chore instead of fun. And Nick's trade package is exactly the kind of Random fun that I'm all about.

The part of the trade that we discussed was a swap of well-worn '70s Topps fabulosity. And Nick was incredibly generous with this. Highlights include a pair of Hall of Famers from '73: 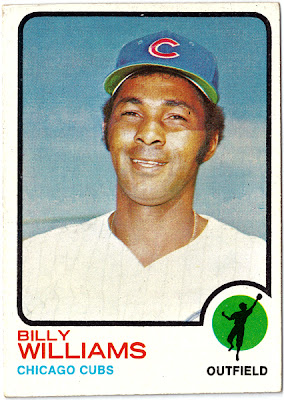 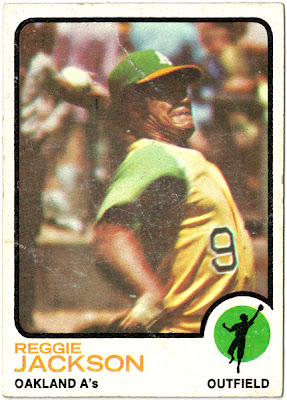 I don't have many Billy Williams cards. In fact, this might now be my oldest card of his, which is a bit odd. So I'm really happy to have it. And I've always been fascinated by the Reggie card. He was the AL MVP in '73, so this card would pop up on retrospective cards, like the '75 Topps MVPs or the 1982 K-Mart set. Every time I saw it, I thought it was one of the stranger cards I've seen, with that weird distorted look on his face while he makes an action-blurred throw. It's great to have the actual card in my collection now. 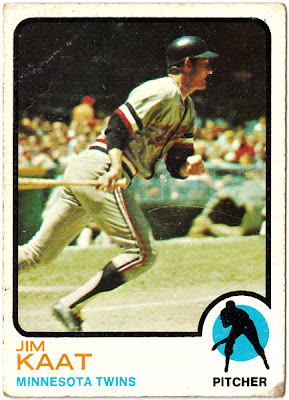 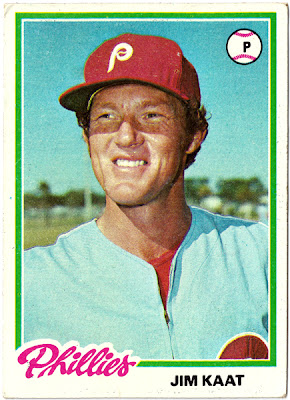 Also got a couple of great cards of one of my all-time favorites, Jim "Kitty" Kaat. You've gotta love the '73, given that it came out the year that the DH was introduced in the American League, and that Kaat was one of the better hitting pitchers in the game. 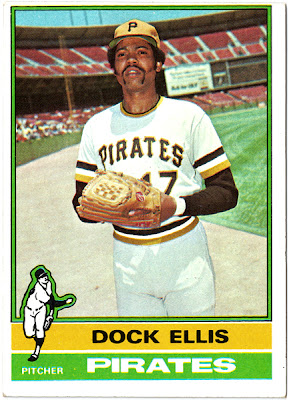 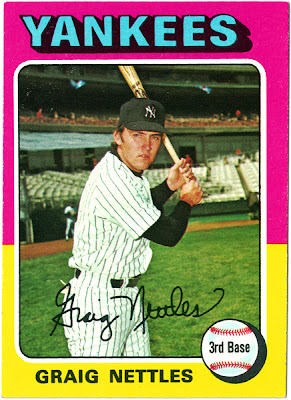 Unlike the vintage that I sent to Nick, quite a few of these were actually in pretty great condition. In fact, the Nettles may be the best-looking '75 Topps card in my collection now. And Doc Ellis is always a blast. Gotta love a guy who can throw a no-hitter on acid.

I also got a '77 Boog Powell, just in case it doesn't pop up in Night Owl's boxes. If it does, I'll be able to pay one forward to somebody. The best card from the vintage portion of the trade I'm holding back for the next post, which will introduce my favorite new mini-collection.

As great of those cards are, it was the rest of the package that really lit up my night. These were the "extras," cards that Nick picked out to send because he thought I'd enjoy them. (Boy, was he right!) As with the package I'd sent him, the extras made up the majority of the trade package. (We even managed to send each other the same card: the great '93 UD Casey Candaele, leaping for a line drive at Wrigley.) I'd never received anything like this before. It was like getting a large repack, only one that was custom made to appeal to my particular tastes. I know you veterans out there have probably become jaded about this type of thing, but this was nirvana to me.

I've often mentioned the all-too-common hole I have in my collection (Topps base sets excluded) from about 1997 to about 2006. I love getting my hands on cards from this era, and Nick certainly hit it on the sweet spot there. He started things of with a pack or two worth of '03 Donruss and '06 Fleer, which are both sets that I really like. And there were some great cards, especially of pitchers, including a rookie K-Rod, Chan Ho Park, and Juan Cruz in action with a great splayed-fingers grip on what appears to be a palmball.

Then Nick started hitting me with cards that showed that he knows what I like. There were a few Dodgers cards I didn't have, some terrific '93 UDs, including Hard Hittin' Mark Whiten with his helmet on backward, some '80s OPC with team variations from the Topps sets, some really great Pacific Legends cards, some managers, some '03 Ultras... I mean, things I dug just kept coming at me! It was so much friggin' fun! It's hard not to show all of the cards, but I'll try to stick to a few highlights in view of the fact that you might have other things going on in your life... 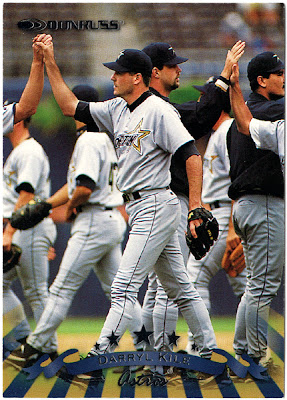 I'm usually not a huge fan of post-game celebration cards because they can be monotonous and uninteresting. That's so not the case here. I probably spent more time staring at this card than at any other here. The thing that kept coming to mind for me was Busby Berkeley. 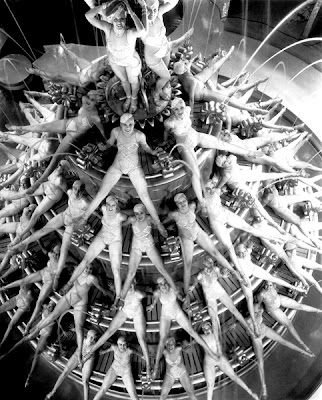 You may remember my mentioning that I went through a serious classic movies phase recently. Among my favorite experiences with that were the Busby Berkeley musicals, particularly his big three from 1933: 42nd Street, Gold Diggers of 1933, and Footlight Parade (from which that is an enticing sample above). If you have any inclination to check out this kind of thing, I can't recommend these highly enough. And this card is a Busby Berkeley musical come to baseball life. Dig it! 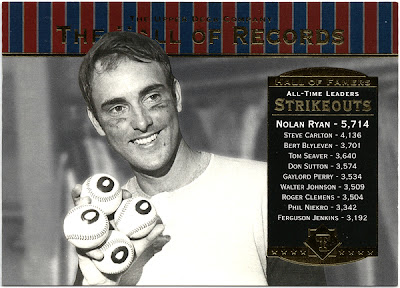 I love this card. I mean, just look at it. But it also pisses me off. It's not Ryan's fault. It's friggin' Roger Clemens. You want to admire the accomplishments of the players who achieved the most impressive numbers in baseball history. But when you see the name of a cheater on these lists, it just turns the experience sour. I'm used to having that feeling when I pull one of his cards (or a Bonds, or a Sosa, or a Palmeiro, etc.). But to have one of them taint a great card like this, of someone else... that's just a real bummer. Still love the card, though.

Some of the best-looking cards were Topps cards, which is no surprise. I won't show them now because most of them will be featured prominently at Top of the Topps someday. (No, it's not dead, just resting.) But here's a superb example of one of the better-looking, not to mention enjoyable, insert sets that I've seen from Fleer: 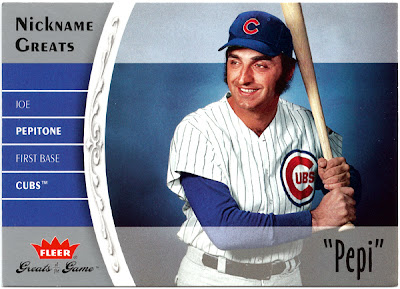 If that's not fun, I don't know what is.

As things were winding down, Nick hit me with a couple of mini-player collections. That's meant as mini-collections of a player, not collections of a mini-player. But in the case of the first guy, either would be accurate. And it would be tough to come up with a player I appreciate more than David Eckstein. Easily one of my favorite non-Dodgers of all time. 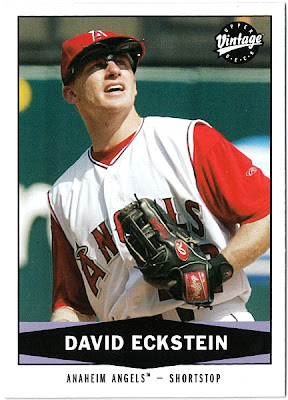 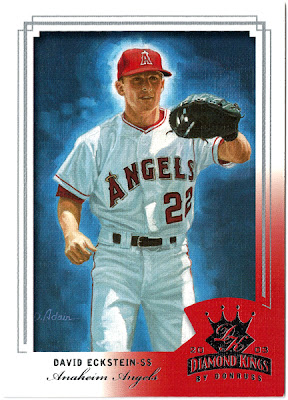 Nick hit me with four Ecksteins followed by three Matt Kemps, including the great 2012 Topps Heritage. In one of the more ridiculous and sad ironies, my collection is almost completely devoid of Heritage before this season's lackluster effort. So, another smile-inducing card. My face was starting to hurt by this point!

Nick then managed to satisfy my sweet tooth for WBC cards, including a great friggin' Dodger... 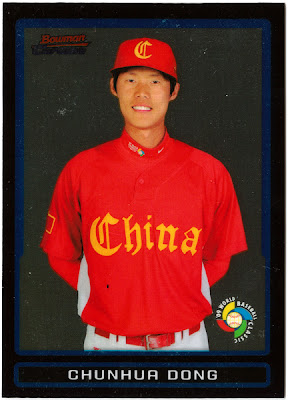 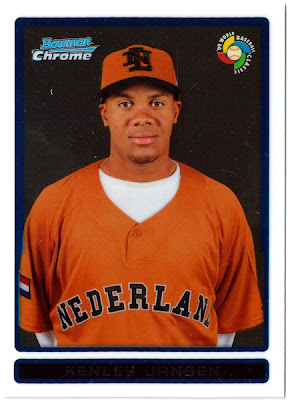 I think I got those descriptions right. Nothing confuses me more than Bowman and its various chrome/refractor parallels. But I'm not confused about how much I loved getting these. I have a particular soft spot for Asian baseball cards, and you don't see much from China. Plus the dude's name is Dong! That's a card that can be appreciated on many levels, both high and low. But the Kenley Jansen, Netherlands' catcher card is flingin' flangin' fab! A real "holy crap!" moment when I saw that one.

But here was most amazing part about this package, to me:

I've been hanging out on eBay a lot lately (a bit too much, probably). I've managed to land some fabulous fun at prices ranging from great to... well, "I really wanted it, so it's worth it." One of the things I've enjoyed doing is trolling for individual 99-cent, free-shipping, cards. Most of them are overpriced, even at that. But sometimes I just can't resist.

One such case occurred on Friday, when I saw a great Satchel Paige card that was an awesome fit for my favorite new mini-collection (which I'll be formally introducing shortly). So I snagged the card with a smile for 99 cents. Only to see that smile turn to a frown on Saturday when I received a message from the seller telling me that he'd refunded my money because he didn't still have the card and had accidentally listed it. Bummer.

Of course, you know where this is going, as improbable as it may seem. 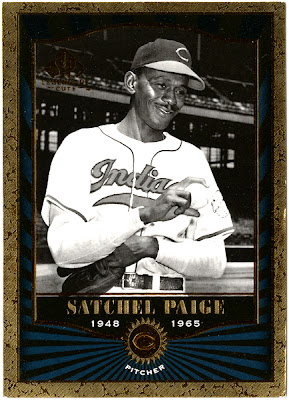 Yup. The exact card that I'd purchased the day before, only to find it unavailable the next day, magically appeared in my hands that very night, thanks to Nick channeling the power of Random. I love these friggin' little pieces of cardboard. I love this blog thing. And I love being engaged in all of this fun with great people like Nick, who made my day/week/month with his incredibly fun, thoughtful and generous package. Thanks, Nick!
Posted by petethan at 9:15 PM