This is Part I of a series (and a contest) that was introduced here. 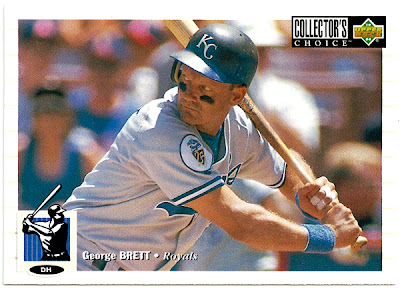 It seemed very unlikely that I would witness history that Wednesday night in Orange County. And I wasn't the only one who thought so. Attendance that night was just 17,336, the smallest crowd for the Angels in Anaheim Stadium in more than 13 years. The only one of Brett's three brothers in attendance was Ken, the former big-league pitcher, and that's because he was an Angels broadcaster at the time. George needed four hits to reach the magic mark of 3,000. And it wasn't even likely that he'd play that night. He'd missed the first two games of the series with a bum shoulder. And the Royals would be returning home to finish the season against the Twins following Thursday night's series finale in Anaheim. You know that everyone involved was hoping for Brett to reach the milestone in Kansas City.

But the season was coming to an end. The Dodgers, who had been pathetic in '92, were on the road and were done playing at Chavez Ravine until next year. And the weather was nice. So I thought, why not? Fortunately, I was able to convince my roommates, who weren't baseball fans, that we had nothing better to do, and we hopped on the Artesia Freeway, taking the route that normally meant we were going to Disneyland when we were kids.

The Angels still shared "The Big A" with the Los Angeles Rams (what is it with teams playing in Anaheim thinking that they're in Los Angeles?), so the seating capacity at this point in their history was 64,593. With the sparse crowd it felt like watching a ballgame in the Grand Canyon. As was customary, given the sad state of our finances, my friends and I sat in the cheap seats, high above third base.

It wasn't much of a game. Brett doubled and scored in the first inning. And it was the only run the Royals would need, as Rick Reed shut down the home team completely. A fifth-inning homer by Anaheim favorite Wally Joyner extended the KC lead to 3-0. That was immediately followed by Brett's third hit of the night, which took the chances for history from unlikely to quite hopeful.

The opportunity presented itself when Brett came to the plate with one out and nobody on in the seventh, with Angels reliever Tim Fortugno on the mound. Brett smashed the first pitch he saw toward second, where the ball exploded past Ken Oberkfell for the milestone hit. The people at the Big A showed some class by setting off fireworks to punctuate the historic moment, as Brett's teammates rushed onto the field to congratulate their captain. And I was among the few who were there in that Anaheim crowd that night to share in the moment.

Of course, as you probably already know, Brett would add a humorous coda to the event, managing to get himself picked off of first base to end the inning, as he was distractedly conversing with the Angels' first baseman, Gary Gaetti. The Royals would tack on another run in the eighth, to make it 4-0. Brett would reach on an error in the ninth and then leave the game to another rousing ovation.

From cheers and hugs and fireworks, to laughter and a bewildered Brett returning to his dugout shrugging in disbelief... it wasn't much of a game, but it was a great night to be at the ballpark.

None of the four contestants in The Surreal Seven contest guessed that I was at this game, so there are no standings to report this week. Tune in next Friday for part two of this series to see if anyone gets on the board.
Posted by petethan at 9:05 PM