My poor counting skills have us back on track. I'd grabbed 11 cards for an earlier "pack." This time I managed to grab just nine, so we're back to multiples of ten. You can sleep soundly now. Until I wake you up with my Jim Rice rant... 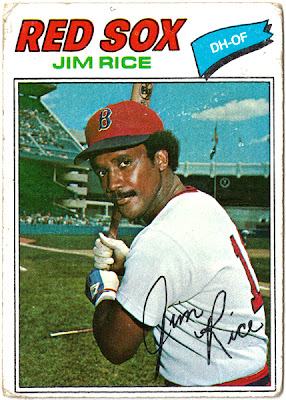 Rocky Colavito is not in the Hall of Fame. Frank Howard? Not in the Hall. Jack Clark isn't either. I'm not sure any of them got a ton of support for inclusion. How about Gil Hodges? Whether you agree or not, I think you get my point. I'm going to do something here that I usually find annoying, but in this case I can't help it:

Pretty darn close. For the record, these numbers were put up for the same team, in the same stadium, over essentially the same period of time. Player A played a few more years, owing to the fact that he was the better athlete. Player A was an eight-time Gold Glove Award winner in right field, known for having one of the better throwing arms in the game. Player B, Jim Rice, was a poor left fielder who served as a DH in over a quarter of his big-league games. Player A, Dwight Evans, a contemporary of Rice in just about every way imaginable, was the better player. Yet 10.4% was his highest Hall of Fame vote total. How did this happen? Jim Rice had a couple of really big power years early in his career and created an aura of intimidation before slowly fading from productive to counterproductive. Dwight Evans just played good baseball, and kept getting better year after year. I don't know what you value, but Dewy makes my Hall. Rice has to buy a ticket to get through the door. 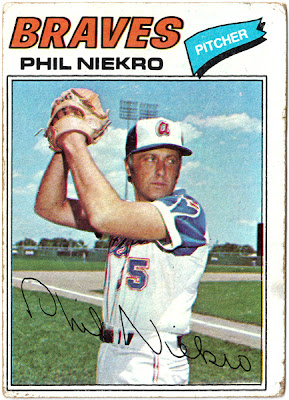 Here's a Hall of Famer I can get behind. Of course, I'm a sucker for pitchers who carve out long careers. I'd say 24 seasons through the age of 48 qualifies. 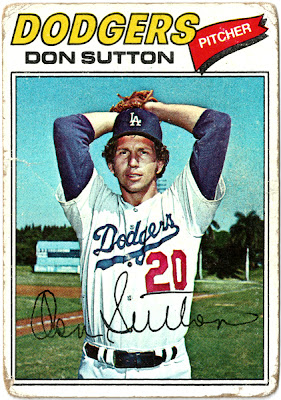 Vin Scully begins the fifth inning of the games he calls by telling a story related to Dodgers history on that particular date. Last night was the anniversary of the franchise retiring Don Sutton's number 20, and Vin used the occasion to remind us that, for a franchise that can boast Nap Rucker, Dazzy Vance, Don Newcombe, Don Drysdale, Sandy Koufax, Fernando Valenzuela and Orel Hershiser, Don Sutton is the all-time Dodgers leader in innings pitched, wins, shutouts and strikeouts. It should also be noted that this was the second copy of this vintage card of a Hall of Famer that I received by mail from a blogger within my first days of blogging. How cool is that!? 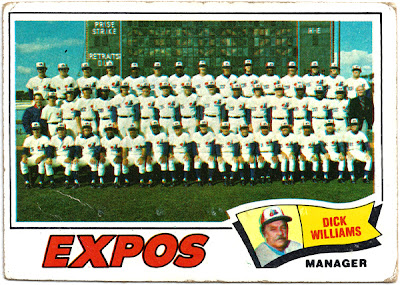 Here's another honorary Cooperstown resident, manager Dick Williams. I wonder if they did that airbrush job on a larger picture and reduced it, or if the airbrush artist had to work with a magnifying glass. I wish I could hop into a time machine and be privy to all of the steps involved with producing one of these vintage Topps sets. You know it was a completely different ballgame than the predominantly board-room and outsourcing process that's likely to be today's modus operandi. I say we storm the citadel and run the show old-school. Who's with me?

We can dream. And, speaking of dreaming, this cartoon (from Larry Bowa's card) provides the perfect opportunity for confused childhood daydreaming... 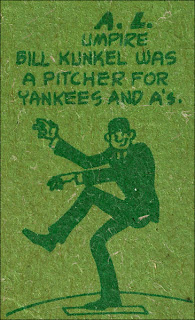 Until you figure out that he became an umpire after his playing days, this cartoon presents a great mental picture of a pitcher who's calling his own balls and strikes. Well, let's be honest: strikes.
Posted by petethan at 1:25 PM