This is Part II of a series (and a contest) that was introduced here. 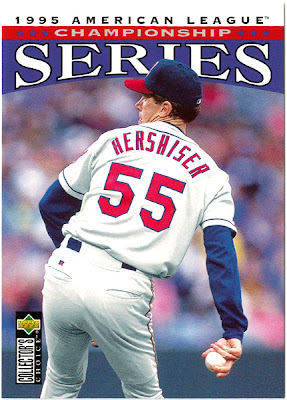 There had been no post-season baseball in 1994. Plus I avoided a too-soon and too-wrong marriage, breaking up with my girlfriend and moving back in with my grandparents in Southern Oregon. I made the most of my freedom in '95, especially from a baseball perspective. I was not one of those to show my displeasure about the strike by avoiding the game when it returned. On the contrary, I appreciated its return so much that 1995 would be my biggest year as a fan in attendance. But most of the story (a multi-state, multi-country, eastern baseball tour) will have to wait for another time.

I don't live close to Seattle, by east-coast standards. The 900 round-trip miles that I drove that October would be enough to catch a game in Boston, Queens, the Bronx, Philadelphia, Baltimore and Washington, D.C. And I slept in my car at a rest stop to save cash. Ah, to be young again. It was certainly worth the hassle, though. This was the first time I had the chance to attend post-season baseball. And I was in the company of some seriously delirious fans.

This was the year that saved baseball in Seattle, the year when the Mariners would "Refuse to Lose," surging late as the Angels faded. The two teams ended the regular season in a tie, setting up a memorable one-game playoff for the division championship, which Randy Johnson won with a complete-game three-hitter. The magic continued in the first-ever (regularly-scheduled) Division Series, as Seattle rallied from down 0-2 to beat the Yankees in the five-game series and advance to the ALCS.

The Mariners had taken game one of the ALCS the previous night in improbable fashion, with rookie Bob Wolcott besting the veteran Dennis Martinez, 3-2. So as I arrived in Seattle, Mariners fans were riding an unprecedented high. The Kingdome that night was, without question, the loudest place I have ever been, and probably will ever be, in my life. I'm not sure how many people there were in that building who, like me, were rooting for the Indians, but it can't have been many. Of course, I wasn't so much rooting for the Indians as I was rooting for my favorite player of all time, Orel Hershiser.

The Bulldog was definitely in his element. Already established as one of the best big-game pitchers in baseball history, Hershiser weathered the hurricane of M's fans to hold the Mariners to just one run on four hits in his eight innings of work. The only blemish on his record was a sixth-inning leadoff homer by Ken Griffey, Jr., which was a fun thing to see. But another young slugger, Manny Ramirez, hit two homers of his own as the Indians built a comfortable lead. Jay Buhner added a solo homer in the bottom of the ninth against Jose Mesa, but Cleveland held on for a 5-2 win to even the series.

Hershiser would also win game five, and series MVP honors, as the Indians would advance to the World Series to face the Braves. The Bulldog would split two decisions head-to-head with Greg Maddux in the Fall Classic, with the Braves winning the only championship of their '90s dynasty. 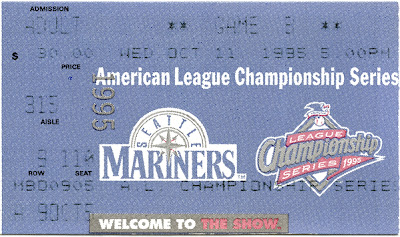 Of the Surreal Seven, even though it's a Championship Series contest, this is probably the least "famous" individual game. So it's not surprising that nobody guessed that I was at this one, to which I'd assigned the highest difficulty level points. Therefore, we still have no contest standings. Don't worry, we do have a couple of Carnacs out there. But we'll have to wait until the action shifts to the east coast before our contestants start tasting a little success. Will that happen next week? Tune in for the next installment of "I Was There" to find out.
Posted by petethan at 12:30 PM