Let's start with the repack fun this time. These are from a Super Jumbo Pack (Baseball Only): 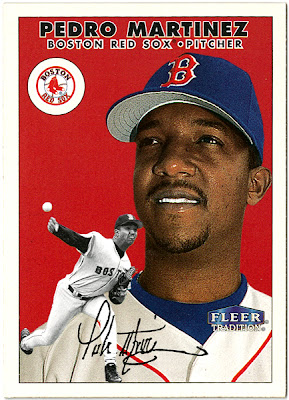 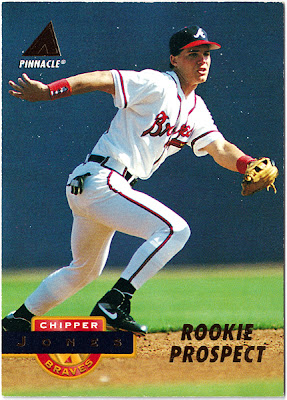 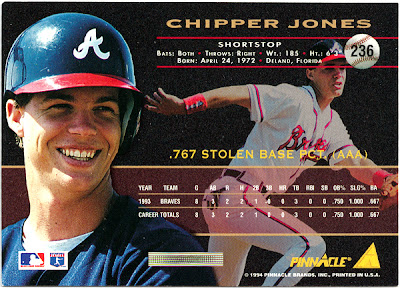 The Chipper was on top. Unfortunately, it's suffering from some kind of permanent dandruff. Nice goofy-looking young Chipper shot on the back. I was thrilled to get the Fleer Tradition Pedro. I am, perhaps surprisingly, a Pedro fan. I was actually kinda bummed when he came back with the Phillies instead of the Dodgers. Though, of course, he'd already taken his place on the all-time Dodgers roster by arriving in the bigs to join his brother, Ramon. I also happen to love this Fleer set, probably because it's a shameless '50s Topps ripoff, and it's on the real-deal card stock. 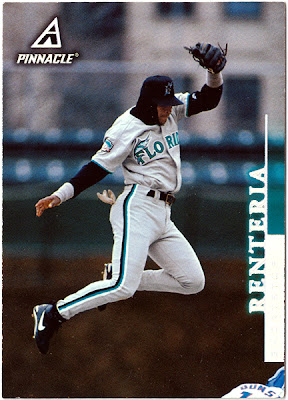 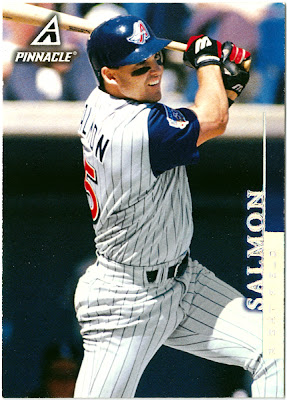 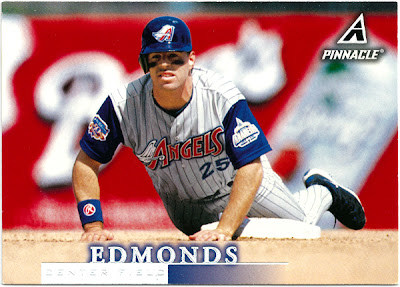 Just about anything from the period around the turn of the century, other than Topps flagship base sets, is likely to be new to me. And these Pinnacles were no exception. These were the only three in the pack, and they're all winners. For some reason, I'm a fan of ballplayers in cold-weather gear. And the two Angels are awesome, too. Great photography, and unobtrusive shininess. I'm gonna have to track down more cards from this set.

Now on to liberating cards from their original packaging... 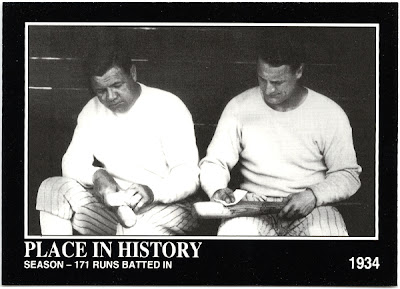 Here are the biggest stars in the game taking the time to work on their bats, sanding them and compressing the wood with a bone. Can you imagine A-Rod doing something like this? Today, if a player gets a brand new bat (among his dozens) with a slight flaw, he discards it without a second thought. 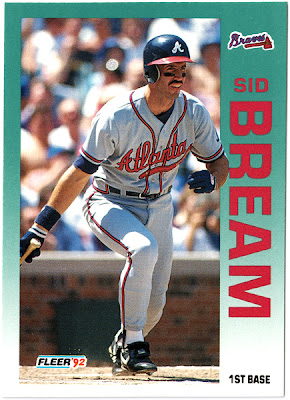 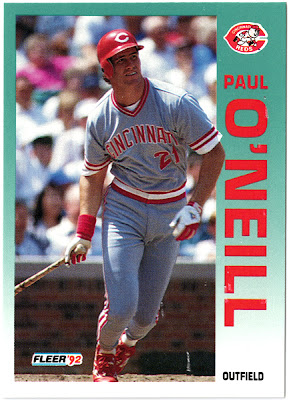 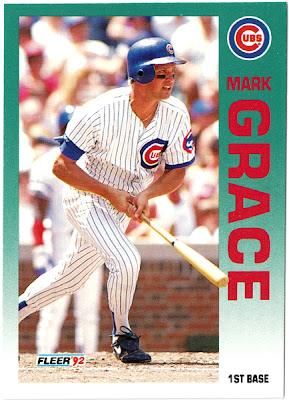 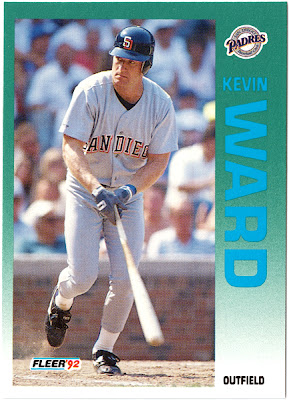 If you like pictures of hitters leaving the batter's box and dropping their bats during day games at Wrigley Field, this set is for you. Believe me, it isn't just this pack. The photographer must have had a pretty sweet gig. Set the camera up on a tripod in April, go pull a Ferris Bueller for six months, and come back to find that the job is done. 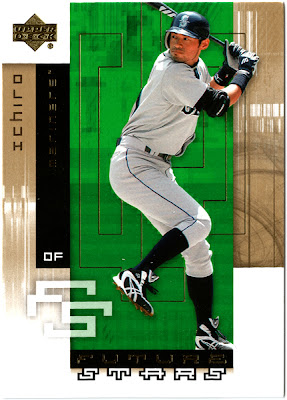 This is from a ridiculous four-card pack I got in one of those multi-pack boxes. I really don't understand this set. All four players were veterans. So I guess "Future Stars" refers to stars on a "futuristic" card design. You will often find that the future is interpreted as being a cluttered mess. That might not be too far from the truth. But that doesn't mean it's a pleasant option for a card design. The green is the only redeeming quality. Only Ichiro somehow manages to look reasonably good in this context.

Another bad design, though with a great concept, comes from '92 Triple Play. I hated cards geared toward kids when I was a kid. Love 'em as an adult. 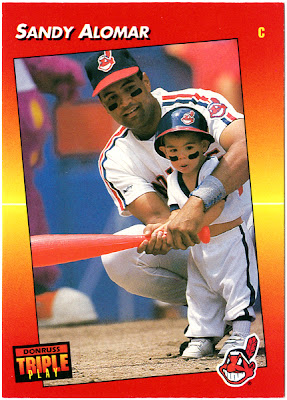 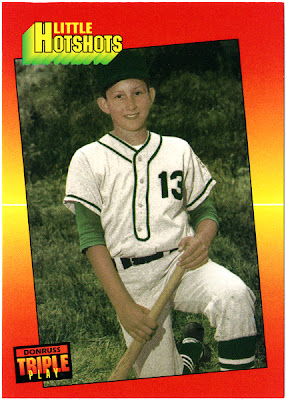 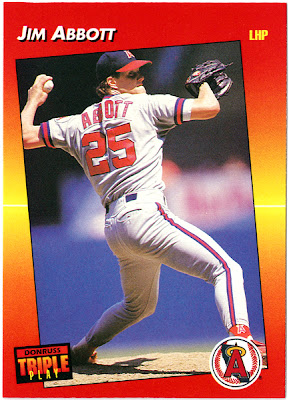 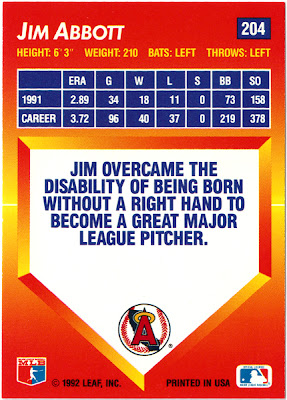 Lance Parrish, pre-mustache, is cool. And I love that they just come right out and tell the kids about Abbott's missing hand. Naturally, it's not something you're gonna bring up every year on the guy's Topps cards. Nor should it be. Let his performance speak for itself. But in this set for kids, it's a fabulous thing. It certainly has shock value to draw a kid's interest. And it gets across the simple message of perseverance and overcoming obstacles that Abbott's career represented. 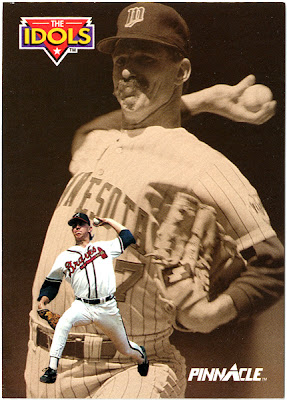 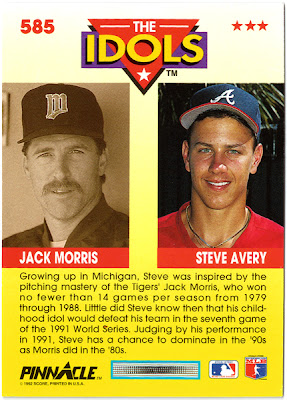 When I first saw this card, I thought it was great! The two had just battled each other the year before in one of the greatest World Series game sevens in history, and the story of Smoltz growing up in Detroit and idolizing Morris was well known. But... wait a minute... Smoltz isn't a lefty. That's Steve Avery, who apparently also grew up in Michigan idolizing Jack Morris. Okay. Cool, I guess. But nowhere near as cool as the Smoltz/Morris story, given the context. What an odd choice, and a missed opportunity.
Posted by petethan at 5:32 PM