Playing With My Dodgers: Joe Becker

When Walter Alston managed the Dodgers International League affiliate at Montreal in the early '50s, Joe Becker was the manager of the Toronto club in the same league. Alston brought the former catcher on board as the Dodgers pitching coach for the 1955 season, and Becker remained with the club in that capacity through 1964. During his tenure, the Dodgers won three championships behind such mound masters as Sandy Koufax, Don Drysdale, Don Newcombe and Johnny Podres.

That said, it's difficult to find much positive information about Becker. Koufax credits him with helping to make him feel welcome in his early years, despite his contentious "bonus baby" status. But he also says that Becker probably did more to hinder his development as a pitcher than to help it. And longtime Dodger pitcher Joe Moeller claims that Becker essentially destroyed his ability to throw a curveball. But Becker was certainly photogenic, in that old-timey, weather-beaten baseball lifer kind of way. So at least he had that going for him. 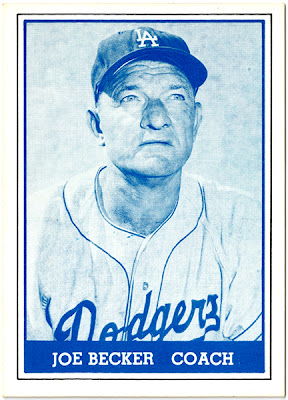 I got this TCMA set, which celebrates the Dodgers first championship in Los Angeles, by mail order when I was about 11 years old. So it represented one of my earliest opportunities to learn about baseball history. At the time, 1959 felt like so long ago that I may as well have been looking at ancient cave drawings or Egyptian hieroglyphics. Today, it provides me with an excellent card of a long-forgotten pitching coach for my PWMD Set, for which I am very grateful.
Posted by petethan at 12:40 PM