My son, Mathew, got married last weekend. So Card Night was limited to Thursday and Friday. Let's see what Thursday night was all about.

As always, let's get the new stuff out of the way. Opened a pack of '13 Topps series two. I'm starting to get dupes. At least the inserts are all still new to me. This time it was a Chris Sale Cut to the Chase card. Don't love this subset, but with all of the black to go with the shiny, this one looks pretty nice. I also busted my first pack (probably of a total of two this year) of '13 Topps Pro Debut. Nobody I've heard of yet. No goofy uniforms or names. But there were players from teams called the Crawdads and the Flying Squirrels, so I guess that's something. And, of course, these get sorted in with everyone else, with the hope that there's a time bomb in there somewhere. Hopefully someday I'll be looking through my cards and say, "Holy crap, I didn't know I had a minor league card of Ephram Slinkenhoeser," or whoever the next Babe Ruth may be.

But it's Old School that makes Card Night fun. And this weekend was the first in which I got to enjoy the fruits of a recent eBay purchase. For only about $10 a pop, I managed to snag four nice 'n' random boxes of unopened yummies that I'd failed to indulge in much of back in the day: 1988 Fleer Star Stickers, 1992 Fleer, 1992 Upper Deck High Series Jumbo Packs, and 1992 Pinnacle. Now we're talkin'. Let's play...

Unlike a lot of stickers issues, the Fleer Star Stickers from the late '80s were pretty much full-on baseball cards that you happened to be able to peel the fronts off of, if you were so inclined. They were just slight variations on the regular Fleer card sets from any given year. In fact, they had nearly identical backs recycled from those sets. But it all adds to the story. New pictures of old players. That's what it's all about, right? 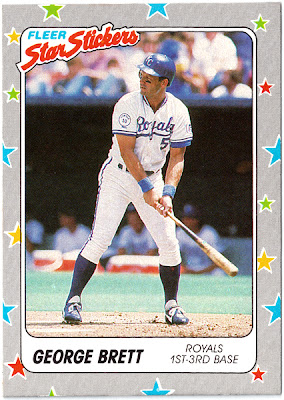 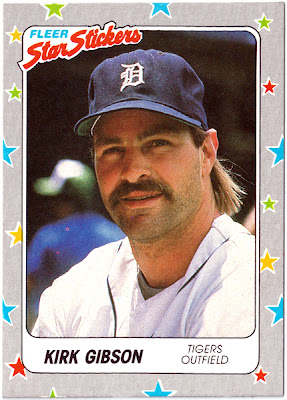 What's up with Fleer and gray borders? But the stars on the borders work for me in the sticker context. You can kind of imagine some 14-year-old girl sticking Brett on the front of her locker at school. Gibson? Not so much.

Before moving on to more of the eBay booty, I enjoyed more of my Craigslist plunder from the previous week. This time I busted into the stack of my favorite stuff from this haul, a stack of about 50 Swell Baseball Greats from 1990. 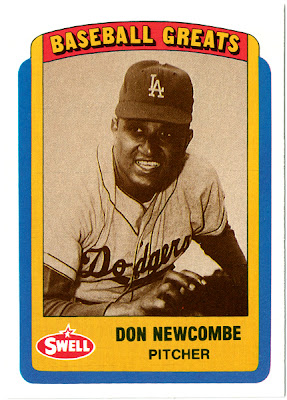 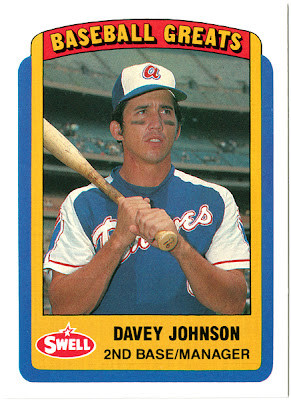 Awesome. Any sighting of big Newk is welcome. And you've gotta dig that they called Johnson a second baseman and a manager on the front of his card. I love these things because it's an oddball set where Hall of Famers sit next to totally random average Joes. I grabbed about a quarter of the stack and, in addition to these two, I got Johnny Mize, Lefty Grove, Ron Santo, Gaylord Perry and Bob Feller. I also got Tommy Hutton, Pete Vuckovich, Marv Throneberry, Frank Torre, Johnnie LeMaster. All in the same set together! Can you beat that? 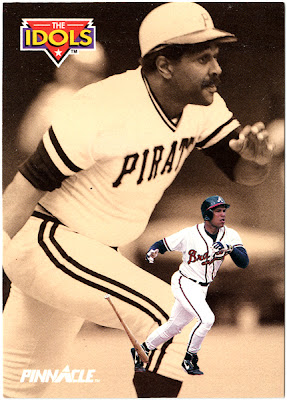 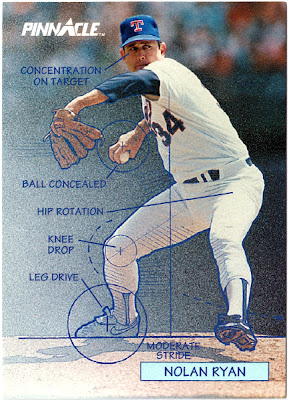 Each of these packs started me out with three cards from a subset, which was interesting. The idols thing is kind of a neat concept. And this Ryan is even cooler than the David Justice card from this subset that I pulled from a repack a few weeks ago. 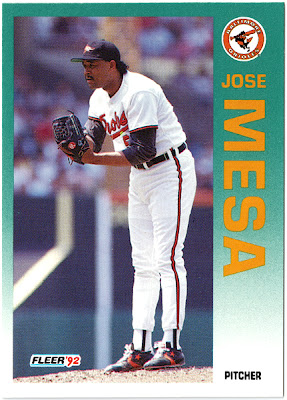 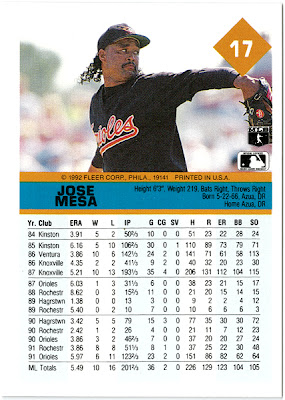 This is a set that, for whatever reason, completely eluded me in the day. And ever since, I've been asking myself why it couldn't have been '88 Fleer that I avoided and '92 Fleer that I had enough of to build an impressive bonfire with. So I was really happy to get my hands on a whole box o' these to bust. I'm showing you Jose Mesa for a reason. But you'll have to tune in to the next installment of Feeding the Habit to find out what it is.

Went light on the repacks on this night, since I was digging on the eBay stuff. But I'll never ignore that modus randomus completely on a card night. 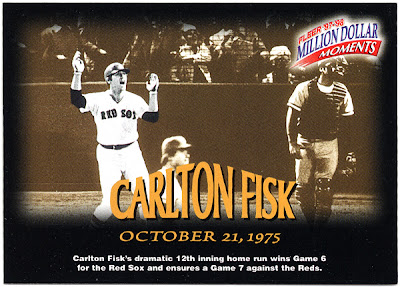 This was the most interesting repack pull. I was out of the card game at this time, so I never saw these or participated in the little contest they represent. But, hey, it's random, and that's what makes the repacks fun. It's cool to see this cropped to include the reactions of Pat Darcy and Johnny Bench.

The final piece of the eBay haul was the '92 UDs. I actually have a good number of these already, not least because they were also a big part of my Craigslist boxes. But they were part of the package with the others, so here they are, in their 27-cards-per-pack glory. 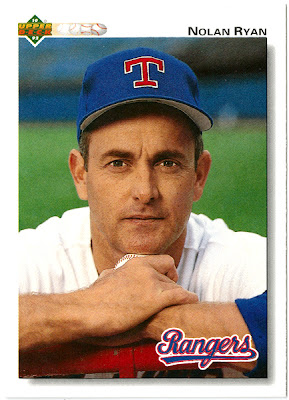 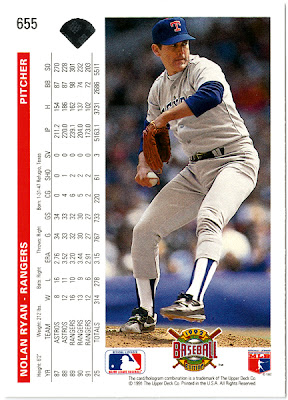 Here's one I don't remember having seen before, so it's a sweet hit. Nice up-close-and-personal shot of the tough Texan. The fact that he's holding a ball makes the shot for me. 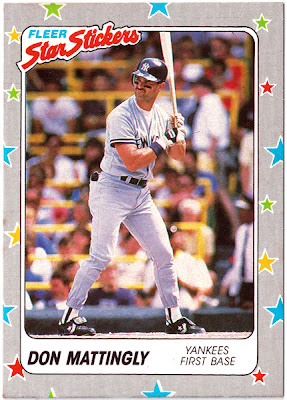 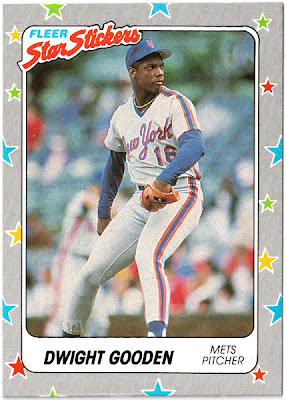 Busted another pack of the stickers and it was an '80s New Yorker's sticky dream. (Yuck. Sorry.)

Digging back a little farther into the card-acquisition time machine I grabbed another little stack from what I've come to think of as The Random Guy Box, the stuff I bought from the poor schmuck I took pity on, who was trying to unload his junk on the card store proprietor when I was there while on vacation. (And that long explanation is why it shall henceforth be known simply as The Random Guy Box.) Anyway, there were a bunch of  '90 Donruss (boo!). But also a pretty cool Robin Yount from Sports Illustrated Kids Magazine. And a couple more ratty '71 Topps cards: 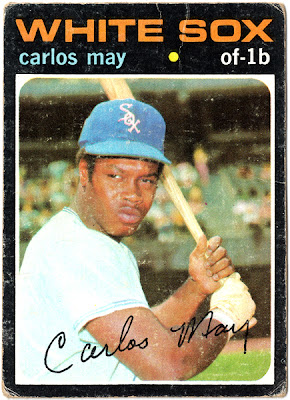 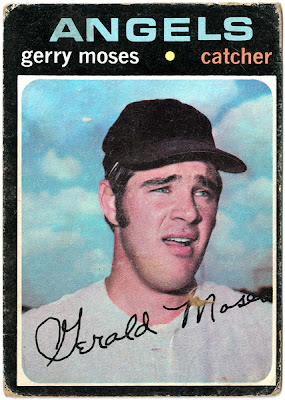 Which, like last time, made me want to grab a card from my individual card purchases from that card shop. This time it was... 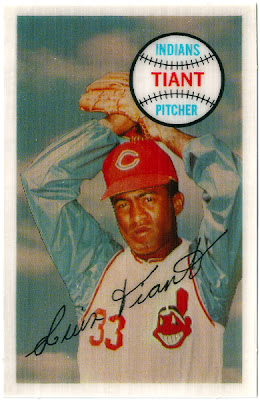 Decided to end the night with one more pack of '92 Pinnacle. I'll have a chance to talk more about the base cards in the coming weeks, but on this night it was all about the subsets. 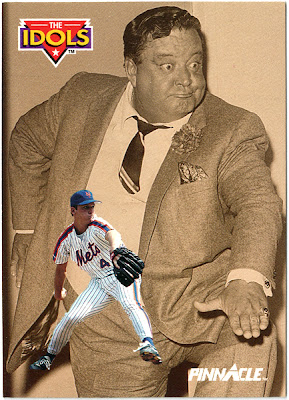 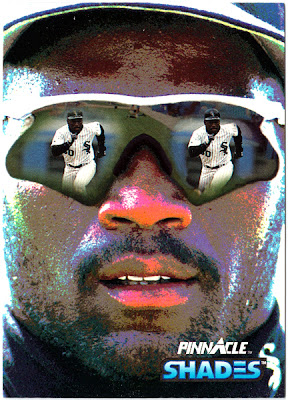 The Shades thing is another cool concept, if only because it's novel. But as far as novel goes, you can't beat opening a pack of baseball cards and seeing... Jackie Gleason? Wow. Now that's random, and I dig the random. I think these are worth flippin' over... 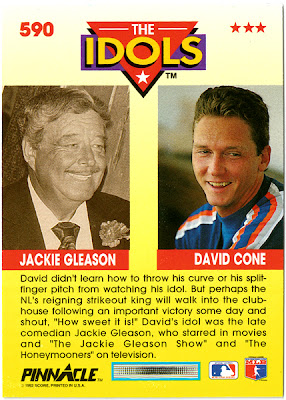 Nice. Another reason to like David Cone. Now let's see what pearls of wisdom the Shades card has in store for us... 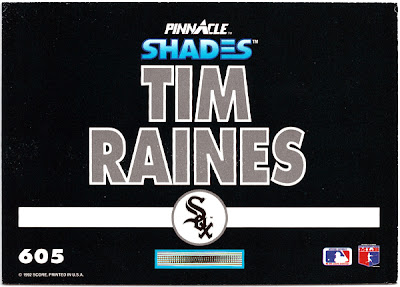 Minimalist random. Baseball cards are like a box of chocolates... (Is that why I'm fat?)
Posted by petethan at 11:46 AM