Playing With My Dodgers: Bob Bailor

Bob Bailor was the first pick of the Toronto Blue Jays in the 1976 Expansion Draft. He would hit .310 in the Jays' first year of existence, winning himself a cool Rookie Cup on his '78 Topps card. Bailor would never quite duplicate that kind of success at the plate. But he remained a favorite of his managers for his hustle and versatility. Unfortunately, his Dodger legacy is primarily as one of the guys they got when they traded away the enigmatic but talented Sid Fernandez to the Mets. Bailor had a shot at replacing the aging Bill Russell as the Dodgers every-day shortstop, but injuries would hamper him throughout his time in Los Angeles, and by the time this card came out he had retired. His biggest day in a Dodgers uniform was probably the final game of the 1984 season, when he drove in three runs on three hits in support of Orel Hershiser, as the Dodgers beat the Giants 7-2. 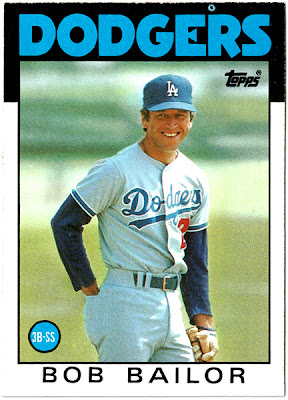 Nice card from one of the better-looking Topps sets of the '80s. The affable Bailor is either keeping his hand warm, reaching into his back pocket for some sunflower seeds, or he's scratching his butt. You decide. My card appears to have a few warts, but it's mine and I'm sticking with it. One day, if I'm really lucky, I'll have enough money to buy the '84 Fleer Update set that I've been kicking myself for nearly thirty years for somehow passing up on at the time. If so, I'll probably upgrade this induction with the Bailor card in that set. But for now, this one's the PWMD representative.
Posted by petethan at 7:03 PM