Playing With My Dodgers: Steve Bilko

Steve Bilko is a Los Angeles baseball legend, and one of the players that I got to hear my Grandpa talk about a lot when I was growing up.

"Stout Steve," as the big first baseman was sometimes known, bounced between the minors and the St. Louis Cardinals from the mid-'40s to the mid-'50s. His best shot came in 1953, at the age of 24, when he was given the every-day job by the Cards. He slugged 21 homers, but also struck out a league-leading 125 times, prompting St. Louis to move in another direction.

It was with the Los Angeles Angels of the independent Pacific Coast League that Biko's legend was made. Though the arrival of the Dodgers and Giants on the west coast was about to change things, the PCL of this era was essentially big-league baseball, west of St. Louis. And Bilko was the last big star of this golden age for the PCL, winning an unprecedented three straight league MVP awards from 1955-1957, leading the league in home runs each year. He was a triple crown winner in 1956, with a .360 batting average, 55 home runs and 164 RBI.

Bilko started 1958 with the Cincinnati Redlegs, and was dealt to the Dodgers in June for Don Newcombe. He took over the starting role at first base for the Dodgers, but didn't hit enough to keep it, with Gil Hodges winning his job back by August (though not before seeing some time in the outfield, third base and catcher!). Bilko's Dodgers career was over, but he would have one last moment in the spotlight. The major league Los Angeles Angels would make him their second pick in the 1960 Expansion Draft, and the team's inaugural season would be Bilko's finest as a big-leaguer. Essentially platooning with another muscle-bound slugger, Ted Kluszewski, Bilko hit .279 with 20 homers and 59 RBI in 114 games for the '61 expansion club, putting a bow on his illustrious LA baseball career.

Oh, and if the name sounds vaguely familiar, that's because a popular television character of the time, Sargent Bilko, was named after Steve. It pays to make your mark in Hollywood. 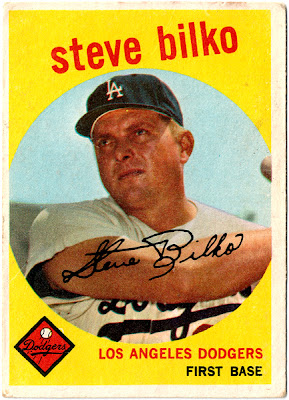 You can get some idea of Bilko's bulk from his only Topps-issued Dodgers card. Most of the Dodgers cards from this set offer a glimpse of the mammoth Los Angeles Coliseum in the background. However, Bilko takes up the whole frame by himself. Also, check out the cool little flourishes in the big guy's autograph. Definitely getting the ol' "gentle giant" vibe from him. What a sweet looking card to grace the PWMD Set.
Posted by petethan at 6:39 PM